A life in Nursing - and a long association with Harpenden 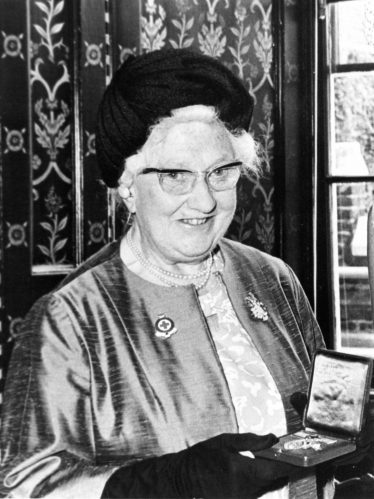 Elaine Hills Young was born in Edinburgh on 3rd February 1895 to Yorkshire parents, her father being a railway engineer with the London and North-Eastern Railway. She attended the Mary Erskine School for Girls then, in 1912, she was sent to a finishing school in the mountains of Prussia. In 1914, just before the start of WWI she had to make a rapid journey home through Petrograd.

Back in Scotland, Elaine gained her St Andrews Ambulance Association Home Nursing and First Aid certificates and became the first V.A.D. to work at Edinburgh Royal Infirmary after the outbreak of the war.  1915 – 1916 saw her as a V.A.D. working with the ‘Scottish Women’s’ Detachment at an Auxiliary Military Hospital in Cheshire.

In 1916 Elaine entered the Nightingale School of Nursing, St Thomas’s Hospital, London to undertake both her General and Midwifery training. In 1918, State Registration became established and she must have been among some of the first nurses to undertake this ‘outside examination’ as well as her Hospital Final. She qualified as a general nurse in 1920 and as a midwife in 1921.

Two years in Egypt – then return to continue training

Elaine’s first overseas appointment was in 1923 to work at the Kasr-el-Aini Hospital in Cairo. She had to quickly learn Arabic as few of the Egyptian nurses spoke English.

After two years in Egypt, Elaine was called home to nurse her father who was seriously ill. In 1925, she became Matron of the District Nurses’ and Private Nurses’ Home, Victoria Nursing Institute, Ripon for three years. During this time she was a lecturer in Home Nursing for the local St John Ambulance Brigade.

In 1928 she gained a British Red Cross Scholarship which enabled her to attend London University to follow an advanced post-certificate course. In 1929 she gained her Hospital Administration and Teaching of Nursing Certificates with Distinction and also a Diploma in Nursing with Distinction. Her College Principal was Miss Gem Jebb, cousin of Eglantyne Jebb, the founder of the Save the Children Fund.

With the Red Cross overseas, including during WWII

Elaine Hills Young then spent fourteen years in the Sudan, first as Matron of Wad Medani Hospital then, from 1930 – 1937, as Matron of Khartoum Hospital and finally, from 1937 – 1943, as Principal, Midwifery Training School, Omdurman and Supervisor of Midwives and Child Welfare Organisations for the whole of the Sudan. 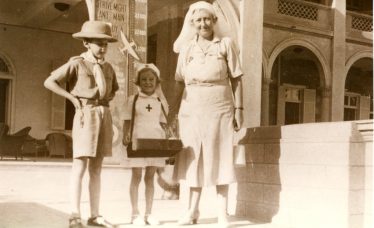 Elaine’s long service to the Red Cross was continued by her being a founder of the Sudanese Red Cross in 1932, and its Vice President. She was a tireless organiser of Red Cross flag days throughout the territory in 1941, 1942 and 1943. She was also a lecturer and examiner in Nursing and Mothercraft and instructed Arab orderlies in First Aid before they were sent to join the Eighth Army in the Western Desert. Elaine was one of the few women to hold the Africa Star, and she was also awarded the M.B.E. for her outstanding work in the Sudan. Her route home in 1943 was circuitous, travelling via Kenya, Uganda, Tanganyika, Belgian Congo, Rhodesia and South Africa.

Elaine spent 1944 escorting prisoners of war to and from Sweden then, for three years from February 1945, she was Headquarters Matron, British Red Cross Civilian Relief Commission, North West Europe. She was among the first nurses to go into Belsen concentration camp and helped organise the six British Red Cross Mobile Teams sent there. She stayed at Bergen Camp from the time of its initial relief until a British Army Hospital Unit took over. Elaine later said that “nothing that has ever been written about it can truly describe Belsen – it was too ghastly for words”.

Next, her work was centred in Holland and the treatment of Displaced Persons; she had charge of five hundred patients at the Montgomery Hospital, Celle. 1946 saw her working in an enormous monastery near Munster which had two hundred beds for Displaced Persons. Gradually, the need for German welfare became apparent and Elaine’s work centred in the Ruhr. She also helped to rehabilitate the German Red Cross, which had earlier been banned as a Nazi organisation, and they gradually took over the welfare work from the Red Cross Relief Commission. 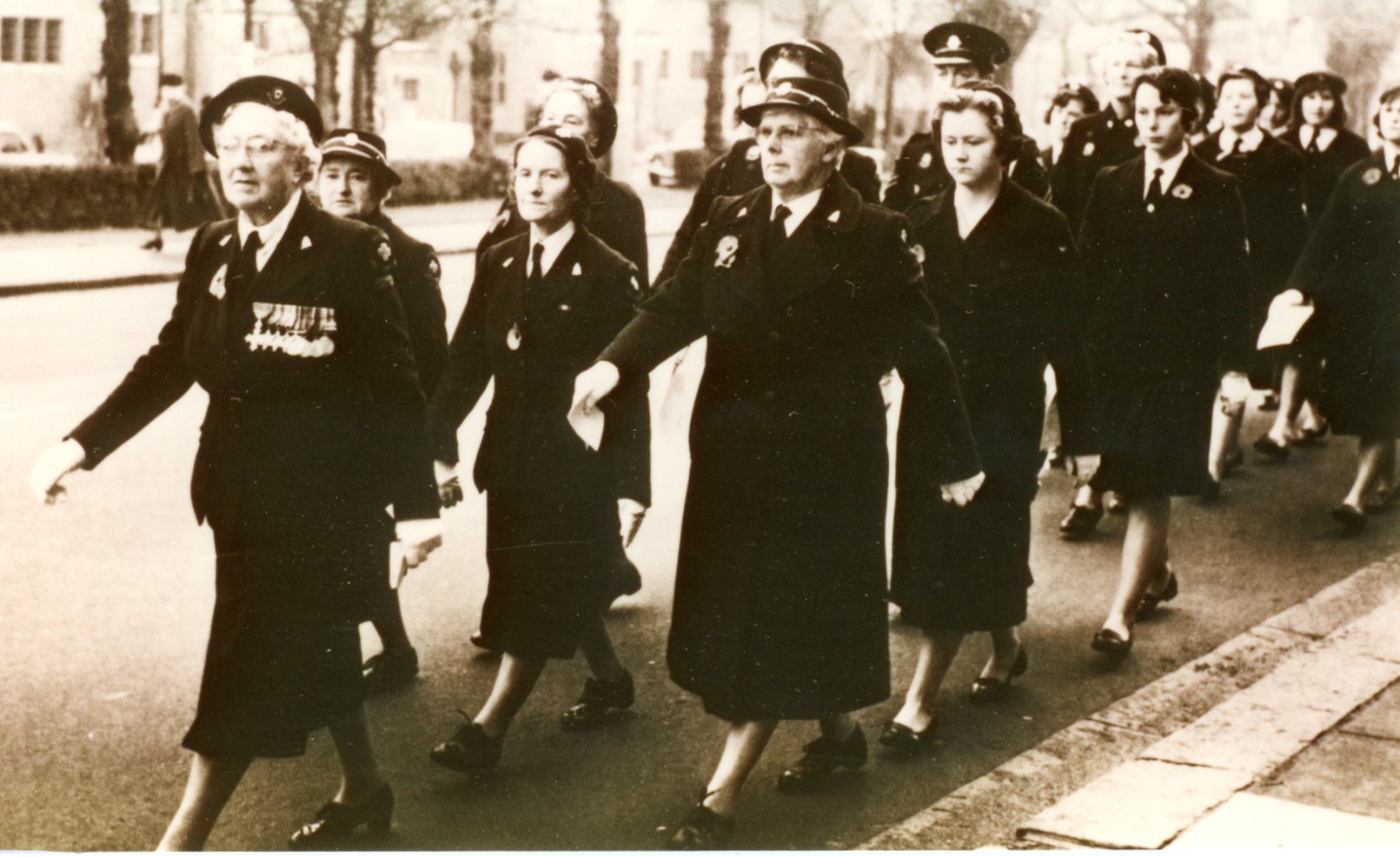 After the war Elaine Hills Young moved to Harpenden and became Divisional Director, St Albans Division, British Red Cross Society, a post she held for sixteen years. She was present at the British Red Cross Society Centenary celebrations held by the Hertfordshire Branch at North Mymms Park on 27th June 1963, and had the honour of escorting Her Majesty Queen Elizabeth, the Queen Mother round some of the displays.

As well as her Red Cross activities, Elaine was Hon. Secretary of the Florence Nightingale International Nurses Association and Hon. Editor of its journal for twenty three years until 1971.

Elaine was an inveterate traveller and in 1967, en route to a conference in Athens, she was able to enter the barracks at Scutari to see the little room used by Florence Nightingale kept as a museum. This same year, recognition of her lifetime of service to others came with the award of the Florence Nightingale Medal.

Elaine Hills Young died on 29th May 1983, aged 88 years. Her funeral took place at St Nicholas’ Church, Harpenden where she had attended Sunday by Sunday for over thirty years. A guard of honour was formed by a uniformed contingent of friends from the British Red Cross Society, led by Mrs Joan Wiggall, Branch Director. 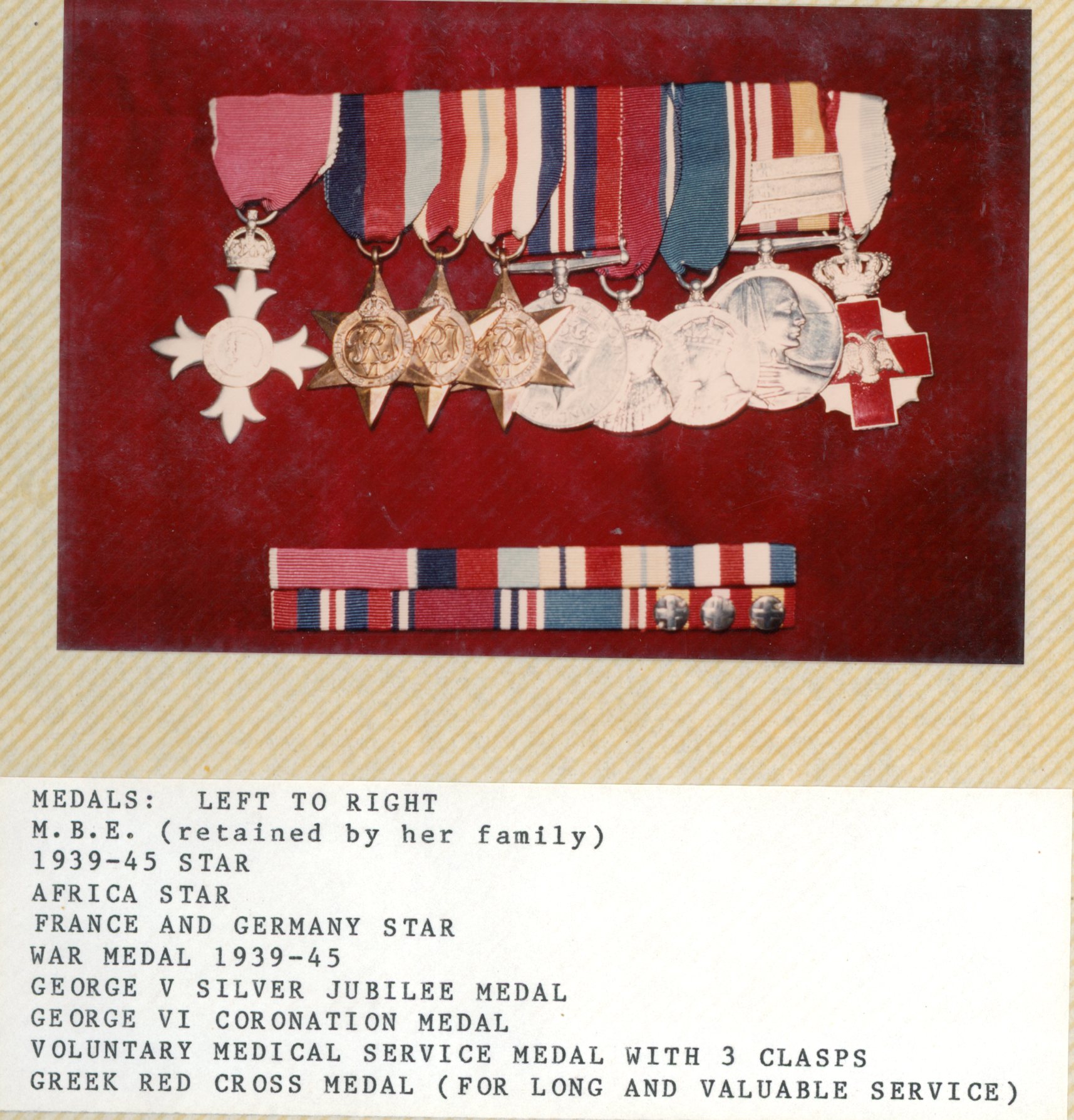 Medals awarded to Elaine Hills Young, presented to the Hertfordshire Branch of the British Red Cross Society in 1983

Taken from a book compiled by Mrs M. J. Donaldson to accompany the medals belonging to Miss Elaine Hills Young. The book is retained in the archives of the Harpenden and District Local History Society.

Contribution Form (do not delete)