You are here: HomenextHarpenden HistorynextTopics - from Archaeology to WartimenextCrime and punishmentnext'Wild Westerham - Shooting affray in Kent' and 'St Albans Stationmaster's Tragic Death' 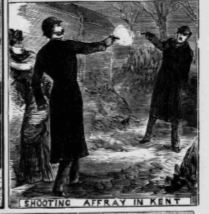 From the Gloucester Citizen, Tuesday, 17 April 1883

A singular case of attempted murder has been tried before Mr. Justice Williams at Lewes Assizes. 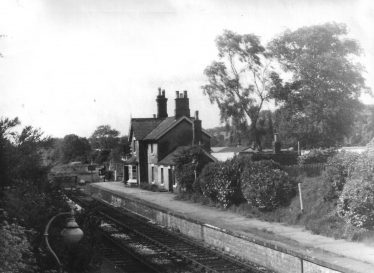 The prisoner, Albert Edward Saunders, a railway signalman at Harpenden, had been engaged to Rose Ellingham, a schoolmistress at Westerham. Miss Ellingham broke the engagement and married Mr. Tippins, the schoolmaster. This greatly annoyed the prisoner, who sent them threatening communications, and on the night of November 17th 1882, he lay in wait for the prosecutor and his wife on their way home from school. Prisoner fired at Tippins with a pistol, and the schoolmaster, who carried a similar weapon for self-defence, returned the shot. Both men were wounded. Tippins was struck over the heart, but the bullet was averted by his watch and the prisoner received a bullet in the neck. The jury found the prisoner guilty, and he was sentenced to ten years’ penal servitude.

Several other newspapers – but none in Hertfordshire –  reported the incident in November 1882. All used a common report, with similar facts to the above.

The Illustrated Police News of Saturday, 2 December 1882 carried an artist’s impression of the shooting on the front page titled ‘Shooting affray in Kent’ (the two men blaze away at close range, a horrified Mrs. Tippins looks on) and reported the incident at length on page 2.

Some additional details are found therein –

The schoolmistress was Rose Ann Ellingham of Harpenden who had moved to Westerham in Kent nine months earlier and had married Luke Tippins about six weeks before the shooting. Alfred Edward Saunders (here rendered ‘Sanders’) is described as a booking clerk at the Great Northern Railway’s Harpenden Station, aged about twenty-eight and rather stout.

Saunders confronted the couple on the night of 17 November 1882 and fired a revolver at Tippin, hitting him in the left arm. Tippin drew a two-barrelled pistol and fired back but missed. Both men fired again at the same time. Saunders’ shot struck both the ring of Tippin’s fob watch and the steel swivel attachment, breaking them both, and ended up in his waistcoat lining right above his heart. Tippin’s shot hit Saunders in the left shoulder. Saunders fired a third shot, which missed, and ran off.

Saunders was arraigned at Sevenoaks Petty Sessions and remanded whilst further investigations were carried out and both men recovered from their wounds.

Why the case was finally tried at Lewes Assizes in Sussex is nowhere explained. At that date there was no legal restriction on the possession of firearms. 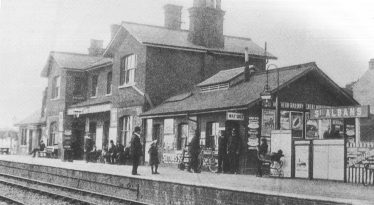 London Road station, St Albans, was  the scene of a murder. The station master at the time was Jonas Ellingham. He was a zealous official who ran his station with the efficiency of a sergeant major. But one morning in August 1918 things were not quite right. He did not appear on the platform to flag the 2.45pm train on its way. Anxious station staff dared not break into the house in case it was an innocent mistake. It was not until the evening when the dreadful truth was known. Jonas Ellingham’s body was discovered in the sitting room. He had been battered to death with a railway hammer by his wife Eliza who had tried to kill herself soon after. At her trial three months later, Eliza was found to be totally insane and unfit to plead. She spent the rest of her life at Leavesden Mental Asylum.

A transcript of the inquest was in the Hertfordshire Mercury, 24th August 1918

The Harpenden connection goes back to before 1824 because Rose and Jonas‘s mother, Maria, according to the 1851 census, had been born in Harpenden and she was aged 27.  In this census she was married to Thomas Ellingham (born Kimpton about 1825) and they were living in Back Lane, Coldharbour with their son Edmund (recorded in some census as Edward).  Thomas was an agricultural labourer; Maria a straw plaiter. Maria’s maiden name was Smart and her sister Emma, aged 10, born in Harpenden, was living with them.

Ten years later Thomas and Maria  were living ‘on the Road to Luton, Wheathampstead’ ( ie in Batford) with Edward/Edmund, John, George, Jonas, and Rose Ann*. In 1871 they were at Pickford Mills. They could have been in the same house but George is now recorded as a miller so they may have moved down the road to, or nearer to, the mill. Son Daniel had been born but he was elsewhere for the 1891 census although Thomas and Maria are still at Pickford Cottages with Edward/Edmund who was still single.

* It would seem that she was actually registered in St Albans as Mary Ann and this name is recorded in the 1871 census although from then on she was Rose Ann.  There was another Mary Ann Ellingham registered in Luton born the quarter before Rose so perhaps that is why the Harpenden girl was known as Rose Ann.

Rose’s birth was registered at St Albans in the second quarter of 1860 as Mary Ann (see above).

She is recorded in National School’s log book (now St Nicholas’ School) as a monitor and pupil teacher there from 1873 until ‘the year ending October 1879’.  She was not qualified under Article 79 although it would seem she gained something for Arithmetic in 1875.  She was keen to become a teacher for in the 1881 census she is in  Hockerill, Bishop’s Stortford, at a Training School for Mistresses.  The establishment is still a place of education.

She apparently became engaged to Albert Edward Saunders before moving to Westerham to teach.  But there she met Luke Ricketts Tippins, also a teacher, and married him in 1882 – the cause of the ‘affray’. Rose and Luke  moved to Mistley and taught at the elementary school and continued to live in Mistley. Rose died there on 2nd April 1925.

There is a lack of information about Albert as there were several possible Albert Saunders making it difficult to track his background although there was a Saunders family in Harpenden so he could have been a Harpenden lad.

Luke was born in Kimbolton, Herefordshire around 1859.  His father, William was a farmer, born in Staunton (on) Arrow and his mother, Mary, in Pembridge. In 1871 Luke was a stable boy for Justice of the Peace and landowner, Robert Mungo but by 1881 he was a certified teacher at the Boy’s  National School in Westerham and his sister was his housekeeper.  Where and how had he obtained his teacher training?  As noted above it was there that he met Rose and the ‘affray’ occurred.

Luke was interested in guns and shooting for in the 1911 census he is described as 1. schoolmaster and 2. riflemaker and under 2 as employer and worker.  Also there are numerous reports in the local papers of his shooting prowess, winning prizes, shooting at Bisley etc.

In Rose’s probate report (1925) he was described as a retired schoolmaster.  He did not die until 30th January 1940 and he too was still in Mistly – living at ‘The Haven’.

Jonas was two years older than Rose, born 1857; he married Eliza Feaver, a London girl in 1880 and in 1881 was a railway clerk in Corby.  By 1891 he had moved to Hornsey still as a clerk (for the Great Northern Railway) and then was promoted to Station Master at St Albans and was living in the Station House from 1899 and it was  there that Eliza murdered him in 1918.  They had 3 sons and 4 daughters.