The Parish Church; the 'rope walk'; and village pranksters 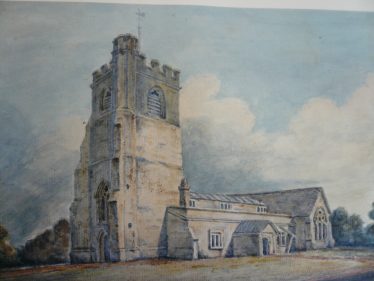 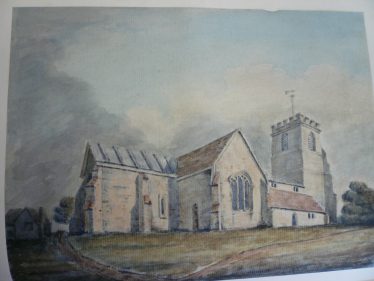 The village of Harpenden in the eighteen sixties consisted of little more than the present High Street, the Bowling Alley and the hamlets of Top-street and “Kingsbourne” Green.  With the coming of the Midland Railway in the early ‘seventies’, the village began to increase, and has continued to do so in a surprising manner.  The first railway that came to Harpenden was the Luton and Dunstable branch line of the Great Northern Railway, which passes through the East end of the parish at Cold Harbour and was built in 1860.  Prior to this the nearest railway station was at Hatfield – eight miles distant – which meant that to get to London and back a sixteen miles’ carriage drive in addition to the train journey was necessary.  In spite of this there were a few residents of Harpenden who frequently went to London on business, although they did not make this a daily undertaking.

In those days people were far more simply-minded than now, and with the exception of the “penny-readings” and an occasional village fete, there was little opportunity for organised amusement.  The first fete of its kind was held in 1863 on the marriage of the late King Edward (then Prince of Wales).  On that occasion the village set itself to surpass all previous holidays, and athletic sports were held on the Common, followed in the evening by dancing on the village green.  The personnel of the “orchestra” for the dance was illuminating.  It consisted of a man with a big drum, an ex-militiaman with a cornet, and the local carpenter armed with a tin tray, which he banged with great vigour until his knuckles were raw!

About this time there was a certain amount of what may be termed “good natured lawlessness” on the part of some of the younger members of the village.  For some reason best known to themselves, they inaugurated a series of bonfires on the Village Green near the Church.  The leading residents objected to this practice and endeavoured to put a stop to it, but they were hampered by lack of sufficient authority.  There was only one policeman, who was supposed to be assisted, when necessary, by the two “parish constables”, but these latter gentlemen were generally conspicuous by their absence when they were required in their official capacity.  (The old parish constables have long since been abolished.  They were local inhabitants appointed yearly by the Vestry which at that time was the only Local Authority existing).

A ducking for the Policeman

On one occasion a more than usually large bonfire was started.  The policeman arrived resplendent in tall hat and swallow-tailed coat (the official police uniform of the eighteen sixties) and tried to put out the fire.  After a brief parley, the ring leaders seized him and ducked him in the village pond!  A few minutes later a pony-trap appeared on the scene.  It had been sent by one of the leading gentlemen of the village with the praiseworthy object of taking away the faggots as the best means of stopping the fire.  Unfortunately the crowd thought otherwise, and despite the protests of the coachman, they unharnessed the pony, poured tar all over the trap and burnt it on top of the bonfire.  At the subsequent inquiry, the leaders of the crowd endeavoured to excuse themselves of the crime of ducking the policeman by stating that they did so in error, as they mistook him for the Rector!  The cream of the jest will perhaps be more appreciated by those older residents of Harpenden who remember the irreproachable appearance and dignified manner of the venerable Canon [Vaughan], the then incumbent of the parish.

Finally a row of trees was planted on the green by the late Sir John Lawes, Bart.  This stopped the fires for a time, but many of the trees were subsequently cut down by the villagers and the few that remained were removed and replanted at Rothamsted.

Near the Green was the old rope-walk which extended right across the High Street.  The local rope-maker was often to be seen walking backwards with his strands of rope festooned round his body, while a small boy turned the wheel which twisted the rope at the other end of the “walk”.  There was, of course, little traffic on the roads, but if a vehicle approached the rope-maker when his rope-strands were stretched across the road, it had to wait until the work was finished! 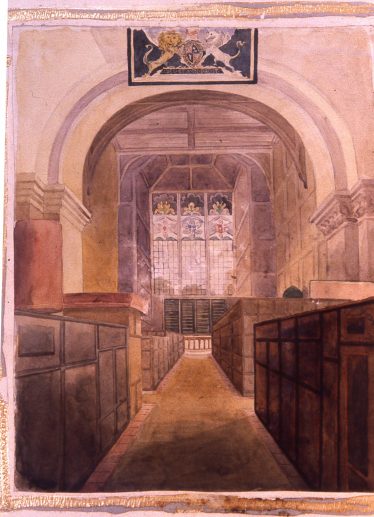 In 1862 the Parish Church – a fine old Norman building – was pulled down and rebuilt, with the exception of the tower, which still remains.  The tower was created about the year 1470 when the original tower was burnt.  The picture shows the old Church before its renovation.  At that time the old church was filled with tall box like pews (commonly known as “sheep-pens”) the pulpit was of the “three-decker” type, and the parish clerk sat in the lowest tier of the pulpit.  There was no organ and the clerk was responsible for starting the singing with the aid of a tuning –fork.  His other duties consisted of leading the “responses” and loudly declaiming “Amen” at all suitable occasions.  A large oil-painting of the Royal Coat-of-Arms (unhappily long since vanished) hung over the chancel arch, and numerous monumental tablets to bygone worthies adorned the chancel walls.  There were no lights of any sort in the church, and members of the congregation used to bring their own lanterns and candlesticks for the evening services!

Some thirty years ago the peal of five bells (which had not been rung for many years previously, as it was considered unsafe to do so owing to the way they were hung) were recast, and a sixth bell was added.  The oldest of the original bells was engraved with the date 1571, and another was inscribed “Johannes Greye me fecit anno dni 1574” (John Grey made me in the year of our Lord 1574).  During the incumbency of the Rev. A. N. F. Keogh two more bells were added to the peal.

Mention of the church recalls the fact that the lordship of the manor of Wheathampstead-cum-Harpenden (excluding the manors of Rothamsted and Annables) was formerly vested in the Dean and Chapter of Westminster.  The “Cross Keys” Inn standing back from the High Street in the centre of the village, is undoubtedly an allusion to the Keys of St Peter, the patronal saint of Westminster Abbey.  Quite possible the “Silver Cup” Inn on the Common derives its name from association with the former ecclesiastical lords of the manor, the “Silver Cup” being in this case a variation for the Holy Cup.

By John W. Lydekker MA (from Herts Advertiser in 1935), with some amendments