Expansion and contraction over more than 160 years

The Herts Advertiser of 9 February 2016 reported: “The Post Office has announced plans for a further franchising programme, following on from the last round of franchises under the ‘Crown transformation programme’.”

By 12 May, the Herts Advertiser announced: “The Post Office is proposing to move its Harpenden branch into a nearby W H Smith store, extending its opening hours to seven days a week.” So Harpenden Post Office follows some 100 others in becoming a franchisee. It moved back to the High Street on 27 October 2016. 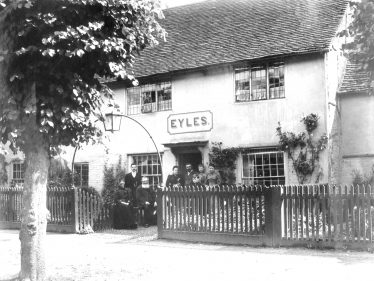 The Eyles (Ilies) family ran a tailoring business at 65 High Street from the 1820s to the end of the nineteenth century. In the 1850s John Eyles was also listed as ‘receiver of post’, though references to John Downes in c. 1826 and Sarah Downes between c.1837 and 1839 hint at earlier postal services – at that time brought by pony cart from St Albans. From c.1862 till around 1874 Thomas Irons was operating from premises on the corner of Leyton Green and Leyton Road (Manor pharmacy in 2017), and Thomas Samwells was in charge between c 1878 and 1886 – mentioned in reports of the fire which destroyed his furniture warehouse in December 1880. The next occupant Charles Winter was there around 1890, before the post office moved the the village Reading Room in 1891.

In January 1883 the Parish Magazine announced that “there is now a third delivery and despatch going direct to London. 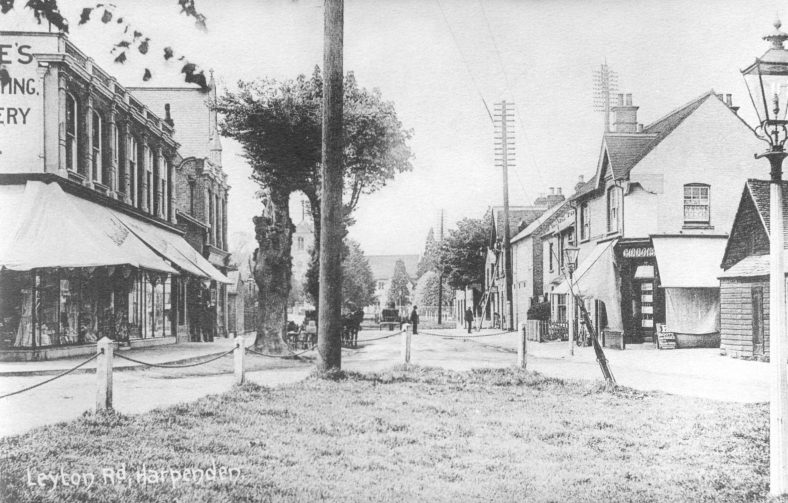 The telegraph office in 1890s was associated with the Leyton Road post office, behind the George (though exact locations are difficult to determine). A route for telegraph transmission had been constructed through Harpenden in 1893 – much to the annoyance of residents: one stood tall beside the Cock Pond. However telephone services for the people of Harpenden did not start until February 1901. Most of the big poles in the centre of Harpenden were removed in February 1951.

With the building of shops on the corner of Church Green and the High Street in 1895, Daniel B Skillman moved from Redbourn to set up Harpenden’s second designated post office which opened in September 1898 – in Norwich House at 46 High Street. Here Mr Skillman employed postmen and telegraph boys, as well as his wife and daughters. By then the telegraph office and first telephone exchange in Island Cottage, Leyton Road backed onto the post office. 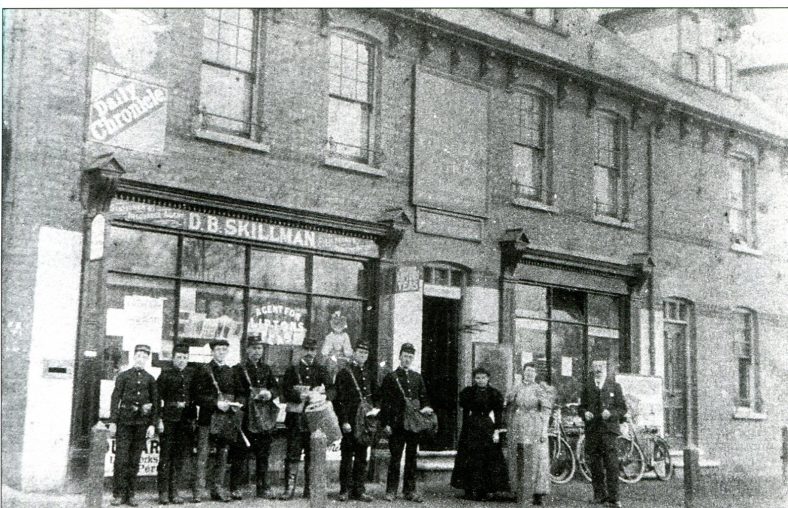 Harpenden’s second post office at opened in 1893 at 46 High Street, with postmen, telegraph boys and Bart and Eleanor Skillman in front of the bicycle, 17 April 1897 – Credit: Scan from ‘Harpenden, the Second Selection’, 1997

In addition to being postmaster Mr Skillman was a cycle agent, stationer and insurance agent for four separate insurance offices, covering life protection, accidents, fire, burglary and housebreaking, and plate glass damage. He later took on duties as registrar of births and deaths.

The old Royal Oak pub on the Lower High Street closed after 1903 and was replaced in 1905 by a purpose-built post office, with sorting room to the rear, at 11 High Street. The builders were the Hackney firm J Jarvis and Sons: E C Jarvis, grandson of the firm’s founder, cycled over from Enfield while building was going on, as he thought the village might offer good prospects for housing development. 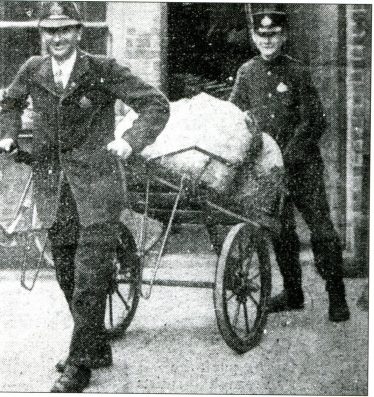 A postman and telegraph boy moving equipment to the new post office, 1905 – Scan from ‘Harpenden, the Second Selection’, 1997 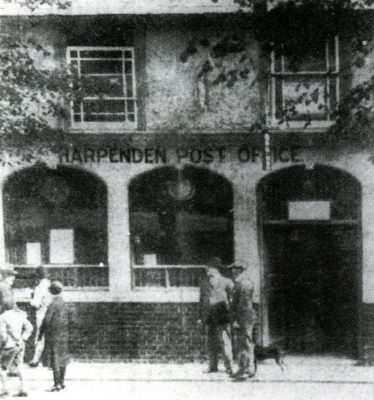 Daniel Skillman was postmaster, assisted by his daughters, but he retained his business in stationery, cycles and fancy goods at Norwich House. Mrs Skillman managed this part of the business. With the outbreak of war in 1914 Daniel Skillman was dismissed as postmaster and joined his wife at Norwich House until his death in 1928. Mrs Skillman kept the business going until 1934 when Whitehouses moved from 24 High Street to run their tobacconist, stationers and toy business (currently Martin’s newsagents). Harry James Reeves took over as postmaster at 11 High Street in February 1915. 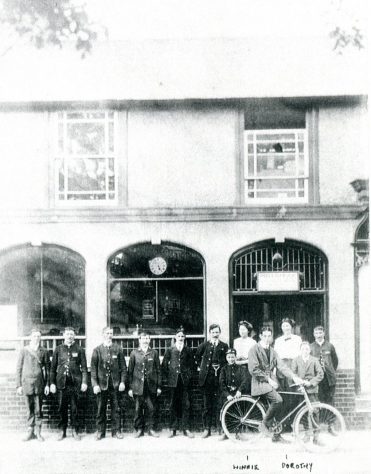 D B Skillman and postmen outside and daughters Winnie and Dorothy, 1910 – Scan from ‘Harpenden, the Second Selection’, 1997 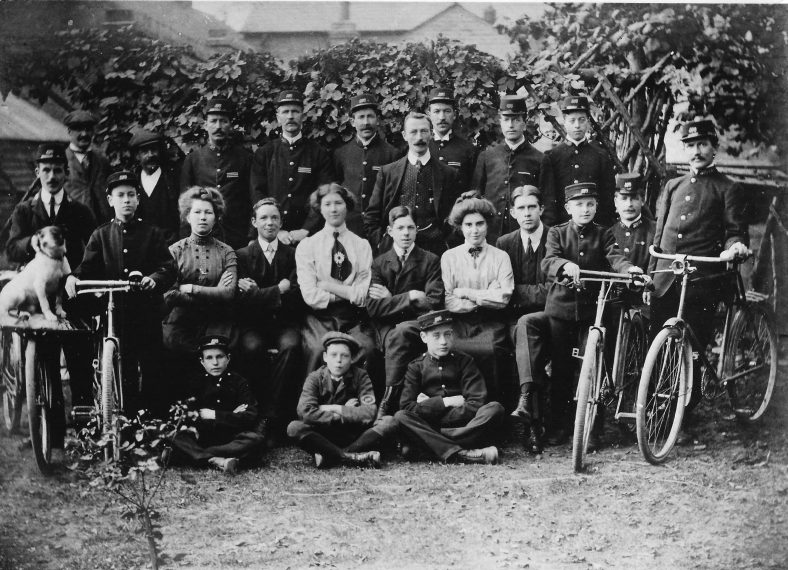 D B Skillman and his staff in c.1910, with his daughters Winifred (seated, second from left), Dorothy (seated, fourth from left), Harry Roberts (seated, fifth from left. He married Dorothy in 1921) and Bart Skillman, standing – LHS archives – BF 16

The post office flourished in the lower High Street, but outgrew its space with the expansion of population and growth of postal services in the 1920s. Harry Reeves was succeeded as postmaster by Mr John Arthur Buttress. in September 1924

In February 1925 land in Station Road was purchased. This involved demolition of the thatched building (possibly previously part of Mavor’s livery stables). 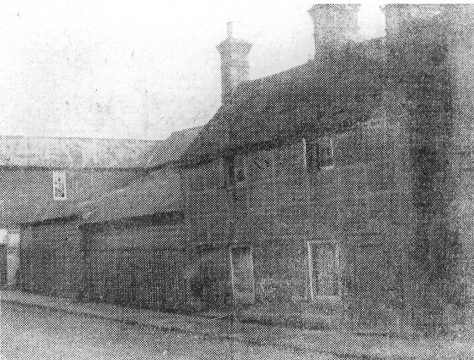 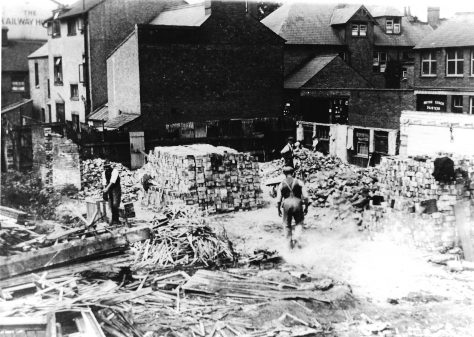 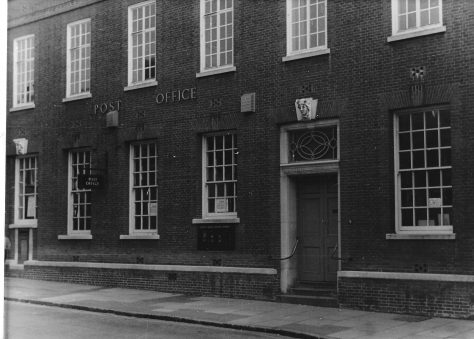 The new post office, with entrance at west end – LHS 2224

The new post office was built and opened in 1928, with Mr Buttress as postmaster until he was replaced by Mr C P Carter by 1932. The entrance was at the lower (western) end of the building, and over this entrance and the matching upper end of the facade, sculptures of Hermes / Mercury remain an important feature. They were carved by Charles Giddings (1870-1946), a Hertfordshire sculptor, who worked on many projects, including the reredos of Ripon Cathedral, the sculpture gallery at Woburn Abbey, the Liverpool Cotton Exchange and the scales on the Royal Courts of Justice. Working on commissioned projects, his work is generally unsigned: relatives are now researching his works, some of which can be seen at Lowewood Museum, Hoddesdon  – 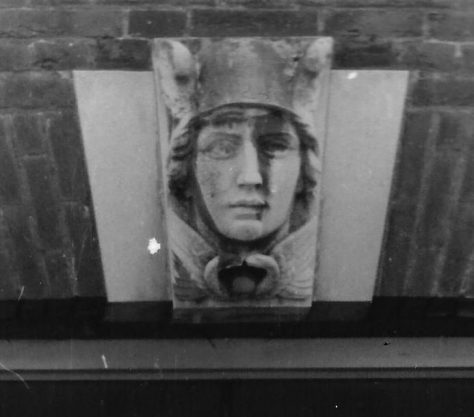 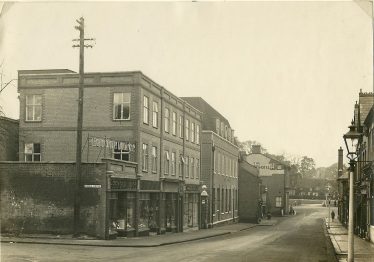 Station Road, 1930s, with Harpenden Dairies and the Library above, entrance to sorting office, and Post Office. LHS archives 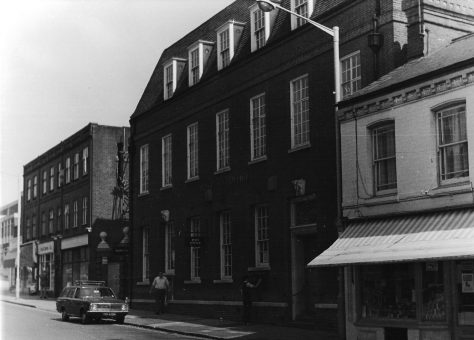 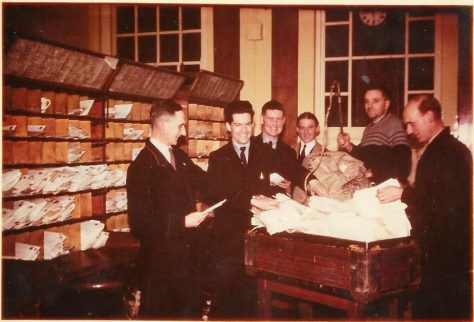 The new telephone exchange was on the first floor of the post office from 1928 until it moved to Bowers Way in April 1961. Up till the end of the 1950s, the Head Postmaster was named in Kelly’s directories: Mr H J W Cross were in post during the war years, until replaced by Mr F A Ledger by 1949. He was the last named Postmaster, still listed in 1958.

Stamps were sold from a machine below the eastern Mercury. Peter Bigg recalls that it dispensed books made from yellow stitched card with small denomination stamps, released by tugging hard on a rectangular knob. Penny stamps were dispensed from a roll in another machine. More sophisticated stamp machines were later replaced by a ‘hole in the wall’ cash dispenser.

Temporary closure and move to portacabins 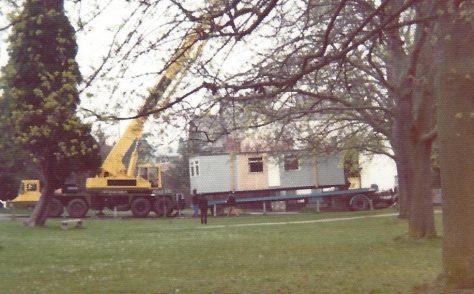 Temporary post office being installed in Leyton Green, while the site at 9 Station Road was expanded. LHS archives

In the May 1972 the post office was closed for refurbishment and enlargement of the sorting office. Staff and customers alike suffered from the stiffling conditions in the temporary buildings on Leyton Green during the hottest summer in living memory. 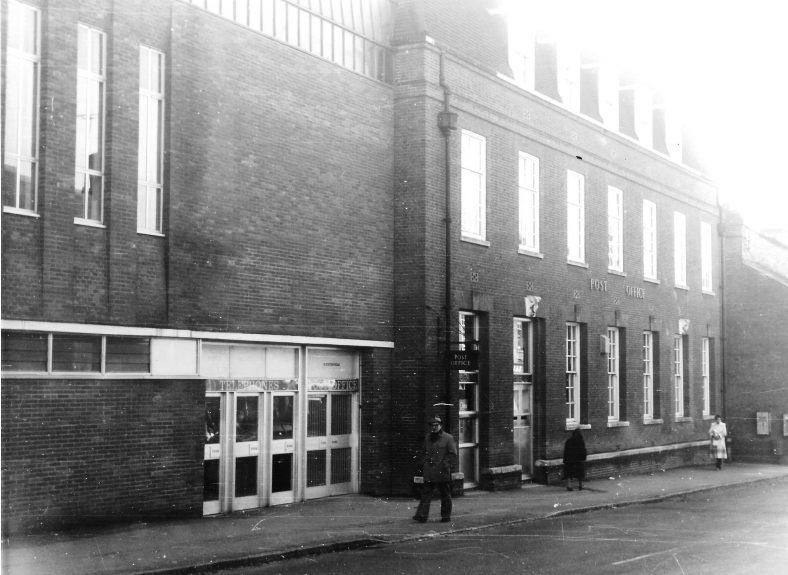 The post office reopened in Station Road in December 1972. The entrance had been moved to the eastern end, and the large sorting office served the rapidly growing population.

The effects of modernisation led to the separation of Royal Mail (collection and delivery) from the Post Office (counter services), and, in 2006, the opening up to competition from what had been a nationwide monopoly in postal delivery. So the purpose-built sorting office was closed, and converted into flats. 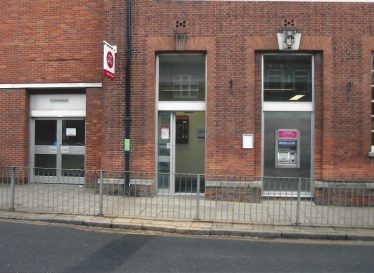 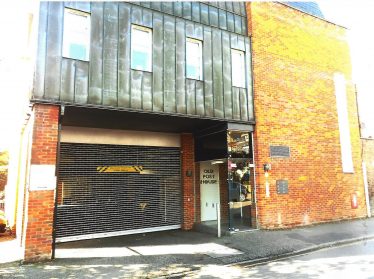 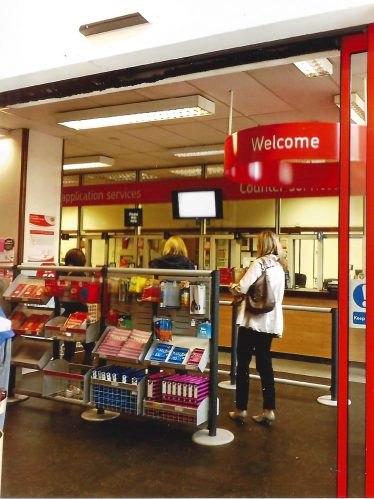 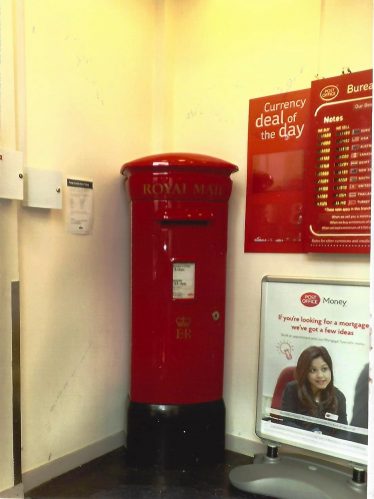 New style pillar box in the lobby to Post Office at 9 Station Road, shortly before it closed in October 2016. Credit: Les Casey

The end of nearly 90 years of the Crown Post Office in Station Road, came with the announcement in February 2016 that it would close and move into WHSmith’s cramped premises at 29 High Street in October 2016. 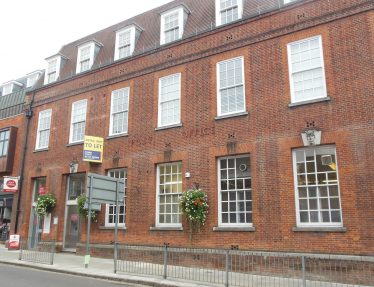 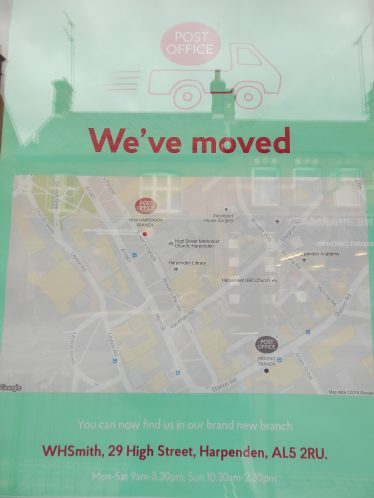 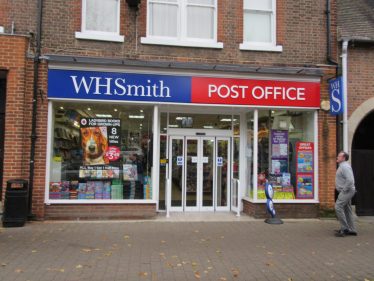 The new face of WHSmith and the Post Office at 29 High Street. Credit: Alan Bunting, November 2016 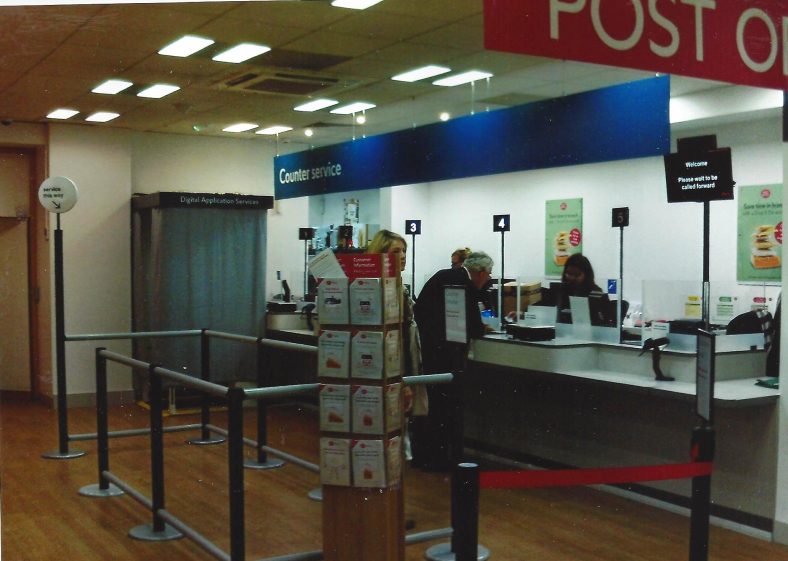 Harpenden residents wait to see how the new arrangements will work when the Post Office is busy! 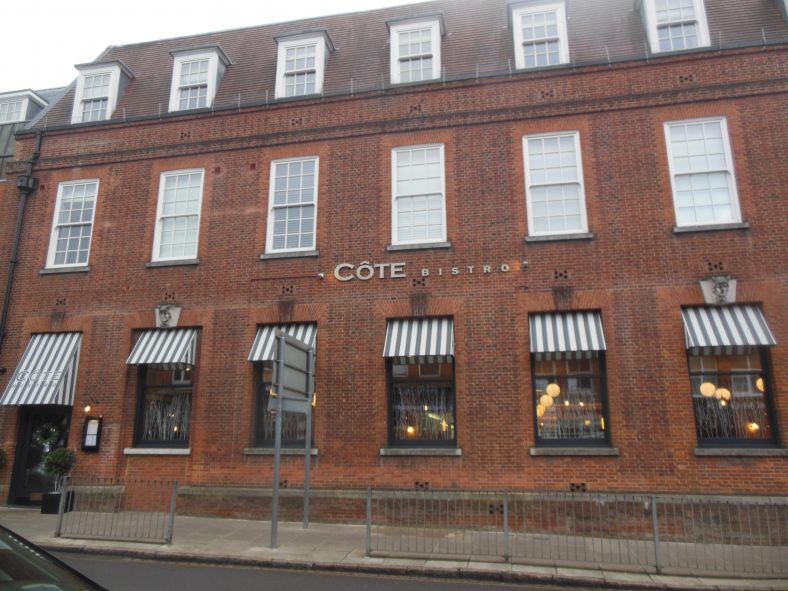 Harpenden’s sub-post offices will be the subject of another page.

By Rosemary Ross with information from Geoff Woodward and John Maryan