Medieval Hall house from c.1500 - an analysis of its structure 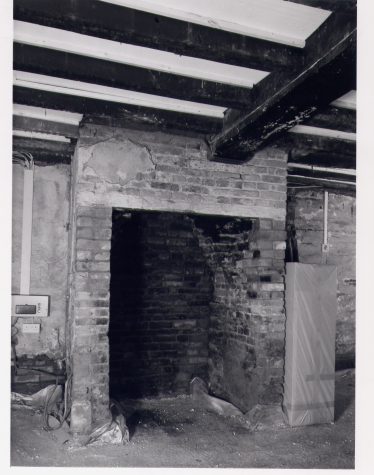 zoom
2 Southdown Road - Hall, lower (N) end with C19 brick hearth and the spine beam of the floor inserted in the C17, chamfered and stopped against the chimney.
RCHM 1975 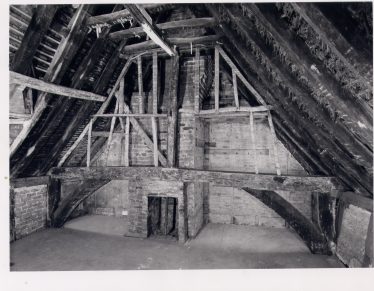 zoom
2 Southdown Road - Chamber over the Hall, with smoke-blackened central open truss and collar-rafter couples. A chamfered square-section crown-post has empty mortice for brace to the purlin, and sits on an arch-braced tie-beam. Behind the truss, C19 framing for a partition and brick chimney with hearth.
RCHM 1975 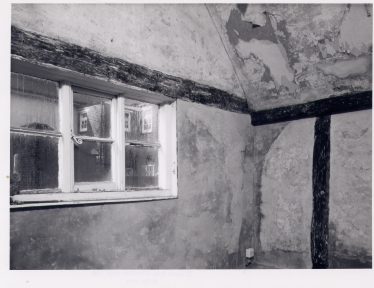 zoom
2 Southdown Road, Crosswing chamber. The West wall time-beam and corner post were both moved when the jetty was cut back. This wall had faint remnants of C17 wall painting on the Hall side.
RCHM 1975

This is an incomplete small late medieval hall-house built in about 1500. Most of the two-bay hall and parlour cross-wing survive, but the construction of the adjoining property at the north end (maybe in the nineteenth century) probably destroyed a service room and cross-passage. Both ranges have crown-post roofs. The original wattle and daub infilling of the timber-frame is largely replaced by brick of various dates; roof tiling and brick chimneys are C19. Restoration in 1973 removed exterior pebble-dashed render and replaced a slate roof on the bay with the present oversized-tile one.

Most of the smoke-blackened timbers of the hall remain including the central crown-post open truss; while there is no evidence for a smoke louvre there is a panel to prevent smoke entering the cross-wing. In about 1600 a floor was inserted into the open hall but the present brick chimney-stack belongs to an early C19 refurbishment; it must be a replacement for an earlier one on the same spot because the chamfer on the inserted spine beam is stopped against the present stack. The earlier chimney could well have been wooden. At the upper end of the hall are the remains of wall painting of c.1600, too fragmentary to identify the subject, but to the expert eye (Clive Rouse, 1989) includes a female figure flanked by foliage. The painting implies that the conventional placing of bench and table was no longer possible.

The wing, also of two bays, had one large unheated room on each floor and a staircase in the SE corner. It was jettied to the west (street side) an its roof hipped at the east (back).

An early C19 refurbishment divided the house into two cottages; brick chimney stacks were built, one to replace that at the north end of the hall backing onto the cross-passage, the other in the front room of the wing, to which a bay window was added as well. The wing had earlier been divided into two rooms on each floor. The jetty was cut back flush with the ground floor face, as evidenced by the cutting of the collar-purlin which removed the crown-post mortice at the gable end, but left the mortice for the brace. The way in which the tie-beam rests on the wall plates also suggests that it had been moved.

The chamfering of the square section central crown-post of the hall is the sole element of decoration. There was no attempt to form a base or capital and it has only two-way bracing. The wing framing at the upper end of the hall is irregular so does not form a pleasing pattern. While the jetty was clearly for display, the rear hipped roof was for economy, the reason being that the central crown-post trusses of the hall and wing were built apparently without principal rafters (NB confim that they have not been removed later).

The Tithe Award of 1843 describes the property and another nearby as ‘cottages & gardens’ owned by Joseph Trustram who by 1851 had become landlord of The Cock. No earlier names have been identified as associated with the house.