A family's history in the transportation business

To commemorate completing 100 years in the business, Oggelsby’s published a 12-page newspaper – “The Centurion” – in 1973. Packed with information on Vauxhall and Bedford motors, and details of anniversary celebrations, the paper also gave an insight into the way decisions made by successive Oggelsby generations shaped the development of this family firm. 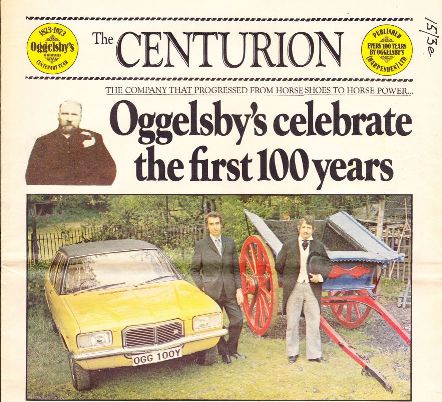 From front cover of The Centurion. Top left is founder Charles Oggelsby. Main picture shows Roy and Eric Oggelsby with a farm tipper of 1873 and a Vauxhall car of 1973. Scan from Centurian newspaper in LHS archives – BF 15.3e

Charles Oggelsby, patriarch and Oggelsby’s founder, started business in 1873 as a blacksmith in Southdown Road in the “Bowling Alley” neighbourhood, then branched into bicycle repairs for which there was a steady demand from impoverished farm labourers who couldn’t afford to buy new cycles. After his death in 1912, Charles was succeeded by his son Frederick who increased this side of the business by also building bicycles – “Oggelsby Specials”, assisted by his wife who sewed the beaded-edged tyres together onto canvas. These machines were often made to measure, but were also available for hire. 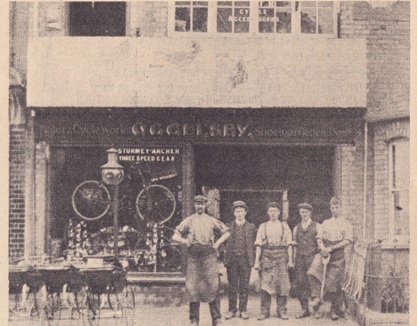 View of Oggelsby’s Southdown Road premises before cars became plentiful on local roads. Prams for sale can be seen to the left of Frederick Oggelsby and his staff. Scan from Centurian newspaper in LHS archives – BF 15.3e

Post WW1, Frederick bought a Model T Ford and started a taxi service, which he extended by including trips to the seaside for up to 20 passengers at a time in his Model T Charabanc called “Little Grey”. In 1923 Frederick moved the blacksmith works to new premises at the corner of Walkers Road and St John’s Road and continued to diversify the business from the two locations to include wheelwrighting, painting, tree felling, wrought iron work – particularly gates – purveyor of prams, fireworks and petrol. One tradition he upheld was to light a huge bonfire every 5th November on the green at Southdown Road. Oggelsby’s initially sold petrol in cans and in later years from one of the first petrol pumps in the area. An average price was 1/- a gallon (5p for 4.5 litres) in the early 1920s.

A major turning point for the business occurred in 1945 with Frederick’s death, just as WW2 was ending. His son Raymond had been serving in the army as a motor engineer and his wife, Elsie, had become increasingly involved in running the business during the war (and continued to influence its progression over future years). On his return from the army Raymond rationalised Oggelsby’s many business activities to focus on motoring. To this end he demolished part of his house alongside the Southdown Road premises, built a workshop and showroom and in 1947 Oggelsby’s became Standard Dealers.

Subsequently, in 1955, Raymond made the decision to move the company to new premises at Townsend, Luton Road which presented the opportunity to develop an all-inclusive service for local motorists. This led to an offer of a retail dealership with Vauxhall Motors Ltd, but shortly after completion there followed a problematic time for Oggelsby’s and the motor trade itself, with the return of petrol rationing due to the Suez Canal crisis. The introduction of new hire purchase restrictions and a limitation on banking facilities also had repercussions for Raymond. During this time he sold the Southdown Road and Walkers Road businesses to focus solely on the Townsend premises, where he was joined by his sons Eric and Roy.

In an upward turn of fortune, there followed a period of expansion of the business including extending above the Townsend premises to create space for a service and parts department, a new car showroom, the purchase of a paint spraying business in Southdown Road and in 1963 they took over a petrol filling station in Batford and expanded it into a new garage. Within two years it had developed into a successful company with increased petrol sales.

Raymond also began to make his name in the motoring world and entered motor races with some success. In 1968 he suffered a heart attack and died aged 52. Eric and Roy took over the business as joint Managing Directors and sold the Batford garage to concentrate once again on the Townsend premises. These were transformed and by 1973 they had enlarged existing departments, such as the self-drive section and added additional resources, including new forecourt services – ‘assisted’ self- service, automated car wash facility, and also re-organised the parts and service departments. The business still only handled Vauxhall motors, as it had for the previous 17 years, and had become the main dealership for the area. Other personal touches they introduced were a free windscreen wash when filling up with petrol, an accessories and commodities shop and promotional offers.

After 100 years F. Oggelsby (Harpenden) Ltd had become one of the most efficient and popular garages in Harpenden.