The story of an old Harpenden inhabitant, born in Bowling Alley 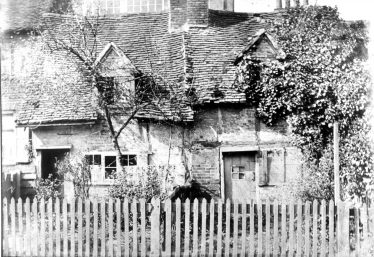 Amy Coburn wrote this summary of Mary Constable’s life for Link, the parish magazine, in April 1994. It was based on a newspaper report of an interview with her in about 1906. Further information from the report of her 100th birthday in February 1910, when she received a telegram from the King.

An obituary in The Herts Advertiser and St Albans Times has since come to light, with information about the last months of her life – see below.

Mary was the daughter of a blacksmith. She was born in Bowling Alley (now known as Southdown) at a time when there were just thirteen houses. As a child she went to a plait school (at Mrs Smallbrook’s cottage). There was no ‘proper’ school for the likes of Mary in the early years of the 19th century. Here she learned to plait straw for the then flourishing local hat trade and to read a little, but the old lady who ran the school did not teach her pupils to write. Mary greatly regretted her inability to write letters. In common with the majority of women in Harpenden and the surrounding villages, Mary continued plaiting for the rest of her life. Until she was sixty she had walked to St Albans plait market to sell her work, and said that she had never made more than five shillings a week . Even so, that was half of the average farm worker’s wage in those days and added considerably to the family income.

With her husband, a farm labourer who died when quite young, she lived for many years in a cottage (LINK) at the back of the Silver Cup inn, but to her distress this was pulled down to make way for Abbott and Anderson’s macintosh factory [probably in the 1880s]. At the time of the interview Mary was living in a cottage standing by the main road near the Old Bell, provided rent-free by Sir Charles Lawes-Wittewronge, Lord of the Manor, with her ‘young son Charlies’ who ‘does the housework’. Plants flourished on the window sill of the small parlour where ‘quaint old furniture had done duty for over seventy years’. From the window she watched the outside world pass by, especially the cars which went by an at ‘awful pace’.

A long life in Harpenden

The reporter learned that Mary Constable had only made one train journey, and that was many years previously to Wheathampstead, and in the days when the carriages had no roofs. Indeed her further journey had been to St Albans. He also learned that the old lady never suffered from any serious illness, and was determined to live to be one hundred. She was also sorry she could no longer manage to get to the parish church.

Mary did live to achieve her aim, in fact she lived on to be 102. Dr Blake wrote her obituary which appeared in the July Parish Magazine of 1912 (and see his reminiscences below). She had received and prized the telegram from the King, and just after her 100th birthday she was taken for a drive round the village and to see the new St John’s Church. …

Mary Constable had four sons: two died as children, one died in the Crimean war; her ‘boy Charlie’, who was then 72, nursed his mother to the end of her life.

Ed: Mary and Charles (Charlie) were together in a cottage next to The Old Bell on 22nd April 1911 for the census but Charlie died that October so was not with her right up to her death.

Mary only made her mark on the census form; the newspaper report below says was still active into 1912 which suggests she could not read and write.

Amisdst many signs of respect, the funeral took place at Harpenden Parish Churchyard on Thursday of last week of the remains of Mrs. Mary Constable, who had reached the venerable age of 102 years, and was, Harpenden’s only centenarian.  The Rector (the Rev. Kean M. Pitt) conducted the service, and among those at the graveside were Dr and Mrs. Blake, the Misses Spackman, and Miss Lowthian.  Many of the old inhabitants of Harpenden attended, and a number of floral tributes were sent. The funeral expenses were defrayed by friends, and a headstone will be erected.

Mrs Constable, who was the subject of an article in the “Herts Advertiser” in 1910 upon the occasion of her 100th birthday, passed into her 103rd year on St. Valentine’s Day.  For some time after that date she still possessed all her faculties, and was very active.  She lived by herself, and until recently prepared her own meals and did light housework.  Eventually, however, she gradually became enfeebled, but as she would not hear of anyone going in to attend to her, she was removed to the St. Albans Workhouse, where she died.

Up to last year she had a son living with her, who acted somewhat in the capacity of housekeeper, but the son died in October, at the age of 74, being the sixth son to predecease her.  The neighbours gave the old lady attention, and a daughter came from London occasionally.  Mrs Constable was born in Harpenden, and had never lived in any other place.  Only once had she ridden in a train – and that was a five minutes ride to Wheathampstead in a “carriage” that had no roof, and resembled closely the present-day goods truck. St Albans, where she used to take her homemade plait for sale, was the furthest journey of her life.  Prior to the decline in her health which proceeded her removal to the Workhouse, Mrs Constable had never had a day’s serious illness. She was proud of her age, and also of a congratulatory telegram which she received from King Edward upon her hundredth birthday, and it was hung in a prominent position in her front parlour. After having maintained her independence for so many years, it is a rather sad fact that the old lady should have ended her days in the Union, the institution as greatly dreaded by her as by many old people in similar stations of life.

Extract from Harpenden in 1879 by Dr W H Blake – compiled from a series of articles entitled ‘Forty Years Ago’ in the Harpenden Echo in 1919 and published by Harpenden Local History Society in 2005:

“[Mary Constable’s] grave is in the north-west corner of the churchyard, with a suitable memorial, and on it a most appropriate text: “Even in your old age I am He, and even to hoar hairs will I carry you”. She kept her faculties and enough strength to do light house duties nearly to the end. Her memory as to past event in her life was very good, and in various chats I had with her she told me of the Bedford coach passing through for London with convicts inside, on their way to Botany Bay, guarded by warders with guns, and of Queen Victoria passing through Redbourn in a four-horse coach soon after her marriage. She did not remember the battle of Waterloo, but she had some coloured rock to each called Bony’s bones; she also had a handkerchief with pictures on it, bought at the fair held on the Thames when frozen over in the early part of the last (19th) century. She was a nice, gentle, cheerful old woman in that station of life to which the centenarians belong. They are poor and do not worry, but not too poor as to at any time the prime necessities of life, viz a roof to cover them, clothes to wear and sufficient food, no matter how plain and simple.”