From Sheepskin Hall on the Common to New Zealand 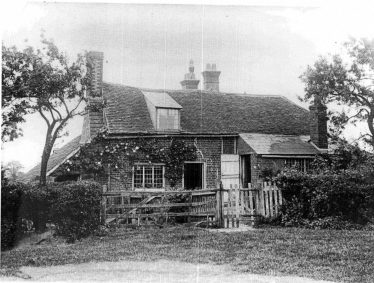 Cottage and forge (lean to on the right hand side) on Harpenden Common – known as Sheepskin Hall. Credit: LHS archives

Living in NZ for the last 49 years, and being an expat. “Verulamian”, I became interested in my family origins a decade or so ago. Both my parents were born in St Albans, and as I dug deeper I found that 3 of my 4 Grandparents were also from St Albans. So, at first, sticking to my own surname I started to go even further back, and found the earliest recording of my family name to date was in Harpenden, where Robert Dunkley, my 4x Great Grandfather was a Master Blacksmith at the forge on Harpenden Common, and he married Martha Ivory on 12th Aug 1799 in Harpenden.

So far I have found out very little about Robert’s beginings, apart from the fact that he came from Northampton, (1851 census). However I have also found a Bernard Dunkley in Harpenden, also from Northampton, and he married Elizabeth Peacock on 5th Dec 1797. (Both Peacock and Ivory are old names in the area), and this gives me the impression that the two men could be related. 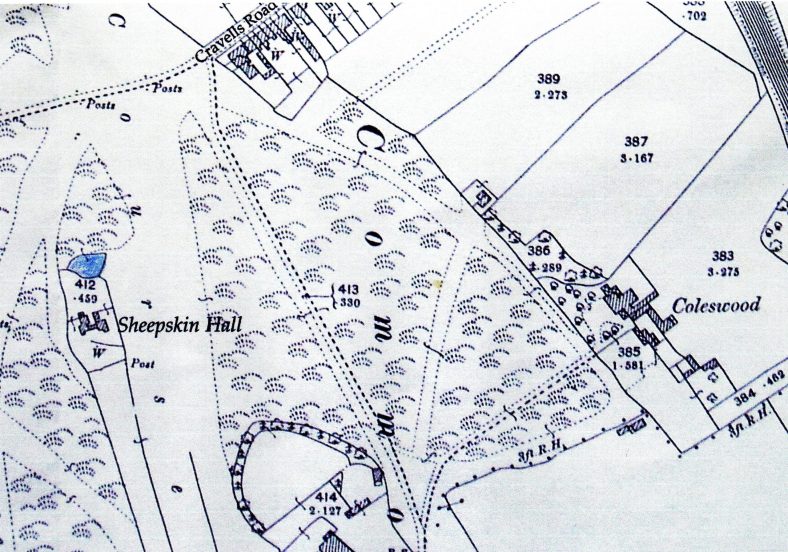 From the 1897 OS map showing the position of Sheepskin Hall, the location of the forge on Harpenden Common. Credit: LHS archives

According to the 1841 and 1851 census, Robert was a Blacksmith living on Harpenden Common in the area called Bowling Alley. This is born out by an excerpt from an old book in the Wheathampstead library concerning Blacksmiths and the placement of Smithies in the area,  quote:   “….. Upper Top Street Farm and Harpenden Common. This last situated near where the golf club-house now stands was run by Edward Lines in the 1860s and 70s and before him by Robert Dunkley.” Martha died on 20th November 1854 of “paralysis 14 days” presumably a stroke. Her death was registered by Sophia Weston of Bamville Wood, Wheathampstead, and her age was given as 75. Robert followed her only 3 months later, on the 25th February 1855, age given as 78, cause of death given as “Natural Decay”, and his death was registered by the same Sophia Weston. There were two Sophia Westons in Harpenden at the time, one a girl of 12/13, the other a woman of  75/76, so I would imagine the reporter was the latter, and possibly the two were related.

The children of Robert Dunkley

Robert and Martha had one son, and five daughters. The son, Joseph, the eldest, was christened in Harpenden on 22nd June 1800. He married a girl named Hannah about 1820, probably in Harpenden, and I have found three children christened to them, Maria in Harpenden in 1821, and Emma and William in Wheathampstead in 1830 and 1835. On the christening certificates of the last two, Joseph is also given as a Blacksmith. In 1841 he was living in Bowling Alley, Harpenden, next door to his parents, with the two younger children at home. As he was shown as a blacksmith on the census, I assume he worked with his father at the Forge on Harpenden Common. As stated in the quote above, I have found Edward Lines “Blacksmith” in residence on the Common in 1861, but also at that time, William Dunkley, who I take to be Joseph’s son as the age is a close match, is given as a blacksmith living somewhere in the Church Green area, at the home of George Burgoyne 48, Straw Factor, but have no way of telling whether he was working for Edward Lines on the Common.

I can find no more references to Joseph in the Censuses after 1841. However at the County Assizes of 27 Feb 1849 at Hertford, a Joseph Dunkley was sentenced to 10 years Transportation for “Robbery with Violence”. Whether this is my Joseph or not, I do not know at this stage.

Robert and Martha’s daughters were all christened in Harpenden: they were Elizabeth in 1802, Maria on 13 September 1806, Eliza in 1809, Ann in 1812, and Elenor in 1820. The three middle girls, Maria, Eliza and Ann, were all married between 1835 and 1837, and all at St Peter’s Church, St Albans, and with their husbands, they all contrived to be witnesses to each others marriages. Maria who was my G/G/G/grandmother, married Issac Luck on 7th November 1836, Eliza married William Hale, and Ann married Solomon Bradshaw.

Ann and Solomon Bradshaw (who was born in Caddington Beds.) moved first to Hemel Hempstead, then to South Mimms and finally to Chipping Barnet. They had  4 children: William, Charles, Alfred and Ann Matilda. Ann died in 1877 and by 1881, Solomon was, sadly, living in Barnet Union Workhouse, occupied as a Gardener. He was still in the Workhouse in 1891.

The children of Maria Luck/Dunkley

G/G/G/Grandmother, Maria had her first child, Emily in about 1832, and she was christened Emily at St Peter’s on 21st October of that year. Maria was not married at the time and so Emily went through life with the Dunkley surname. She did not marry, nor did she have children of her own. In 1841 and 1851 she was living with her grandparents, Robert and Martha, and in the 1851 census she is given as their daughter, working as a plaiter. However, through the 1861 to 1891 censuses, her occupation is given as Grocer and living in Cravells Rd, which leads one to suspect that she probably worked with William Hales, who would have been her uncle.

Despite their move to Barnet, the Bradshaw family obviously kept in contact as in the 1861 census Matilda Bradshaw, aged 11, a cousin from Barnet, was staying with Emily (Ann Matilda was Emily’s cousin, daughter of her Aunt Anne).  She was there again for the 1871 census (aged 21) and in 1881 a Lilian Bradshaw aged 10 of Barnet, a visitor (Lilian was the daughter of Emily’s cousin Charles). In 1891 Emily had yet another visitor staying at census time: this time it was her niece, Annie Fisher aged 18 and born in Harpenden. And I find that in 1871, Nathaniel Luck also had a child aged 11 by the name of Ellen Fisher staying with him, in this case a grandaughter. Nathaniel would have been Grandfather to both of the above children of Sarah Luck and Charles Fisher. Finally Emily had another cousin staying at the time of the 1901 and 1911 censuses: this time it was Emma Humphries ( widow, nee Dunkley) aged 70, and the daughter of Emily’s Mother’s brother, Joseph. Emily died in the June quarter of 1914, aged 82: her death was registered in St Albans.

G/G/G/Grandmother Maria had a second daughter, Mary Ann, born 8th October 1836, and a month later, on 7th November, she married Issac Luck at St Peters, so I think we can safely assume that Isaac was the child’s father. My G/G/Grandmother Mary Ann was christened on 11th December 1836, but this time at Wheathampsted.

Isaac came from a large family of Lucks living in the Bowling Alley area of Harpenden, and he and Maria would no doubt have grown up together. I have found Isaac Luck and wife  Maria in the 1841 census, living in Pimlico Row, Harpenden, but both given as aged 20, when they would both have been about 35, and their daughter is shown as Mary aged 3, when she would have been 5. However there was certain leeway given with ages in the 1841 Census, especially when ages were unknown for whatever reason.

I have been unable to ascertain the date of the deaths of either Isaac or Maria, and cannot find them or Mary Ann in the 1851 census. However Mary Ann appears in the records of the St Albans Union Work House in December 1853, where she delivered an illegitimate son, named George in February 1854, my Great Grandfather. Mary Ann went on to have two more children out of wedlock: a daughter named Jane, also born in the Workhouse, and a second son Frederick. However by the time of the 1861 census she was living in the home of Thomas Pearce, a “horse keeper” in New London Rd. St Albans, and Frederick was born there a few months before she married Thomas, so Thomas was possibly Frederick’s father.  Mary Ann obviously lead a somewhat chequered life, with three illegitimate children, then a further four to Thomas Pearce, after whose death, she married her widowed neighbour Charles Chiesa, and had a further two children with him. Charles already had ten children of his own. This whole large family lived in Sopwell Lane St Albans, and many continued to live there after their own marriages to others in the same street, so that I can count over 80 of my ancestors directly or through marriage in Sopwell Lane between 1841 and 1891. 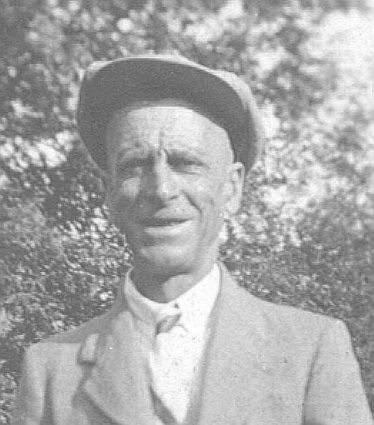 My own line of Dunkleys through George my Great Grandfather, Mary Ann’s eldest, continued to live in St Albans, whereas the family of Frederick moved to the Hendon/Barnet area, although one of his sons moved back to London Colney, and another to Norfolk. Jane and her line unfortunately died out very early.

I was born in St Albans in 1943, educated at the County Grammar, along with many boys from Harpenden, who I remember coming in by train. I also remember the festivities on Harpenden Common at Festival of Britain time in 1951. I went to sea in 1960, and emmigrated to NZ in 1964 as, what is called here a “£10 Pom”. I remained at sea until 1999, and still live in NZ, but return for a visit to UK every 3 or 4 years. 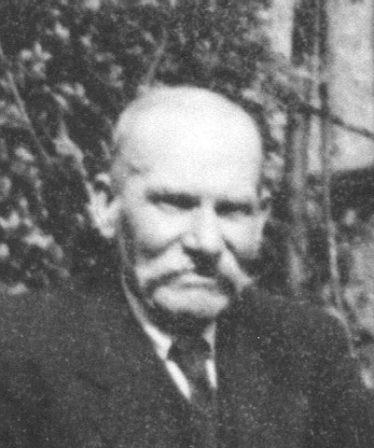 It was interesting for me to find that several of my Dunkley relatives lived in Cravells Rd and that Isaac and Maria Luck lived in Pimlico Row, as my Grandfather George Roome on my mother’s side, and his new wife Ellen moved in to Cravells Road soon after their marriage in 1893, and he was a baker working on the other side of the common, where there was a bakery in Pimlico Row. No doubt they would have known Emily Dunkley who would have been in her 60s at the time. George and Ellen, had
their first two daughters in Cravells Rd, but by the time of the 1901 census thay had moved back to St Albans, where many of my cousins still live.

My Genealogical interests  are still in Bowling Alley, Cravells Road and Stakers Lane. My family interests are in the names Dunkley (Blacksmiths), Luck, Ivory, Biggs (Wheelwrights), and William Hale the Grocer.