A History of Bowling Alley

I came across this name when investigating a footpath that ran from Wheathampstead Road down to Grove Road in Southdown. I found a map from 1777 which covered the southern end of Harpenden. There was no trace of Southdown or the railway – just this small cluster of six dwellings situated roughly where the Skew Bridge pub is now called “Bowling Alley”. It was surrounded by the Common and some fields. Piggottshill Lane was called The Hill, Aldwick Manor was a farm famous for its orchards, Cravells Road was a footpath and Crabtree Lane was called Top Street with three small farms up it. 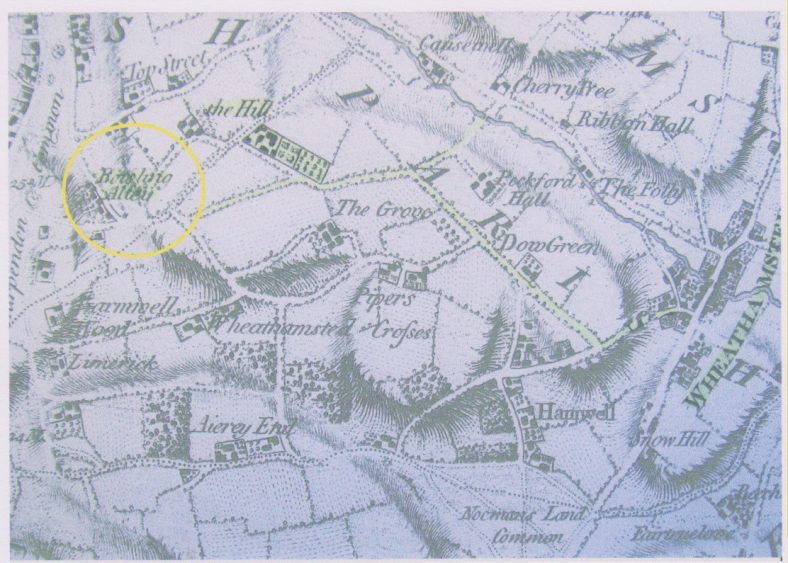 1777 map showing the settlement at Bowling Alley, circled in yellow

I also came across the story of Mary Constable, who was born in Bowling Alley in 1810, and lived until 1912 near this area. I wondered what life was like for her, and the changes she must have seen, as Bowling Alley was transformed by the coming of a mainline railway, and the establishment of a small industrial site around the new gasworks – a mini industrial revolution at the South end of Harpenden.

Mary Constable was the daughter of a blacksmith and was born in Bowling Alley when there were just thirteen cottages. She went to plait school (at Miss Smallbrook’s cottage) and learned to plait straw for the flourishing local hat trade and to read a little. She was never taught to write, which she later regretted, and signed the census with a cross. Like most Harpenden women, she plaited for the rest of her life, and walked to St Albans market from her cottage in Leyton Road to sell her work until she was sixty. She never made more than 5s. a week but it was a welcome addition to the family income. Her husband was a farm labourer earning about 10s. per week. She made only one train journey in her life – to Wheathampstead, in the days when carriages had no roofs. Her husband died quite young. Three sons predeceased her (one in the Crimea War), and a fourth, who lived with her, died a year before her own death at the house she then lived in near the Old Bell, to which she had moved with the support of Sir Charles Lawes-Wittewronge. She was finally transferred to St Albans workhouse, where she died soon afterwards. She had received a telegram from the King, on her 100th birthday, and had a good funeral paid for by wealthier people in the parish. It was sad that she ended up in the workhouse – it was something old people dreaded.

The early development of Bowling Alley

17th and 18th sources refer to Bennett’s Butt – a name given to two cottages and a barn standing on an acre of land where the Plough and Harrow is now – opposite the Trust Hall.

The name Bowling Alley was first applied in the mid 18th century, and probably comes from a field nearby given that name in a 1784 reference – most likely because it was that shape. However, skittles was a popular game, and one of the four alleys in Harpenden was located at Bowling Alley.

Apparently Bowling Alley also had three pubs by 1801, even though the total Harpenden population was only 1112 in the 1801 census – drinking was very popular.

By 1800, just before Mary was born, there was a cluster of houses round a small triangle formed by what are now Southdown Road (then known as Wheathampstead Road), Queens Road and Walkers Road. William Walker’s straw bleaching factory appeared on the Gorselands site in 1840, when Mary was thirty. By 1851, the census lists 245 people living in 48 houses at Bowling Alley. Mary was 41 by then.

The 1861 census shows little change. Mary was now 51, and Edwin Grey’s book “Cottage life in a Hertfordshire Village” gives details of life there. He was born in Bowling Alley in 1859, before the railway came, and I have summarised a few extracts from his work.

Bowling Alley was more isolated from the village proper. There were no houses along Southdown Road, but a sometimes wild and unkempt hedge, with ash, oak and elm, broken by entrances to the field gravel pits, and an old country lane called Crabtree Lane, with its pond on the right hand side of its entrance, and a very fine crab apple tree growing in the hedge bordering the pond.

Before the railway, Bowling Alley was a very pleasant place, because the cottages looked out over the fields and meadows of Lower Top Street farm. The Common was wild looking, with large furze and gorse bushes. In fine weather, donkeys and aged ponies would graze. In more open spaces, flocks of sheep grazed during the summer months. Round the Queen’s Head Inn (now Skew Bridge pub) little flocks of geese and goslings would be feeding. Cravells Road was a rather neglected field called “the thistle field”, and there were no villas fringing the Common.

It all sounds very idyllic, but he goes on to write about the poverty of the villagers. There were no dogs to worry the sheep because people could not afford to keep dogs.

Edwin Grey recalls that there were three basic types of cottage:

There was one fireplace, located in the front room, but the bedrooms had chimneys, which were stuffed in winter to block out the wind. There were no kitchens, bathrooms, coppers or sinks. The houses were built of bricks, with brick floors, covered with coconut matting, or sacking in the poorer homes.The upstairs was stuffed with beds – mum and dad in one, and the children stuffed into others. An “Apple Pie” or round bed was used in large families – a bed was made up on the floor, and the children were tucked in it. When children grew older, a curtain was used to divide up the bedroom.

Coal was very expensive and used sparingly. Coke was used but not liked. Burnable household waste was put on the fire, and fallen wood collected from the Common after storms. A village coal club was formed. Women paid in a small weekly sum which was augmented by donations from wealthier people. They received half a ton of coal in November.
Tallow candles and rush lights were used. Paraffin oil came later. None of the cottagers used gas, although the gasworks came in 1864, while the railway line was being constructed. They couldn’t afford it. All roads were unlit at night, and most cottages were closely shuttered to keep them warm. Public houses must have seemed very attractive, warm and bright places.

There was seldom an oven or range seen in any labourer’s cottage – Just fireplaces with open grates. The bulk of food was prepared by boiling. The fireplaces had sliding pot hooks, suspended from an iron bar or beam in the ceiling. A large cooking pot hung from that. There was a communal bake house oven in the hamlet, and women were allocated baking days according to the size of their family.

Bowling Alley was supplied with a number of wells, with excellent water. One well would probably have to serve 12 or more cottages, another do for 6-8. The wells were deep and required a good length of rope for the windlass. Large brown inner-glazed earthenware pots with wooden lids were used to store a water supply for the house.

Large iron boilers were used for boiling up clothes on washdays. There were practically no drains. For the disposal of soap suds, bedroom slops etc., a large permanent hole was dug at the far end of the back garden – the dung’ll hole. Food waste was added. When it was well rotted, it was used as fertiliser for the vegetable patch.

Old cess pool closets were then in vogue and called privies. One closet had to serve 4 cottages, or sometimes 6. Men took turns to empty the cesspools late at night, having dug trenches in the back garden to deposit the night soil.

Mary Constable, as I have noted before, was known to Edwin Grey, and he writes that she lived most of her life in one of the most picturesque but most insanitary cottages – tiny windows, low ceilinged and brick floored on Leyton road behind the Silver Cup. BUT she lived to the great age of 101.

The Coming of the Railway

I now come to the construction of the railway, which ran diagonally across the South of the Common, and involved the building of huge embankments, plus the Skew Bridge, and bridges across Crabtree Lane, Walkers Road and Cravells Road.

This must have caused unimaginable disruption to the whole area, as teams of navvies and engineers descended on Bowling Alley, let alone the huge quantities of brick, stone and soil that had to be shifted. However, I have failed to find any description of the upheaval involved.

I can report that a gas works opened in 1864 on land beside the proposed railway track, when Mary was 54. The first double-track railway across Southdown started operation in 1868 – Mary was 58 – and was widened to become a quadruple track in 1893 – Mary was 83. So she lived through a double dose of disruption. However, that disruption increased the range of employment, and gave people the chance to afford a better standard of living, acquire more skills, and the opening of a school gave all children the chance to become literate. 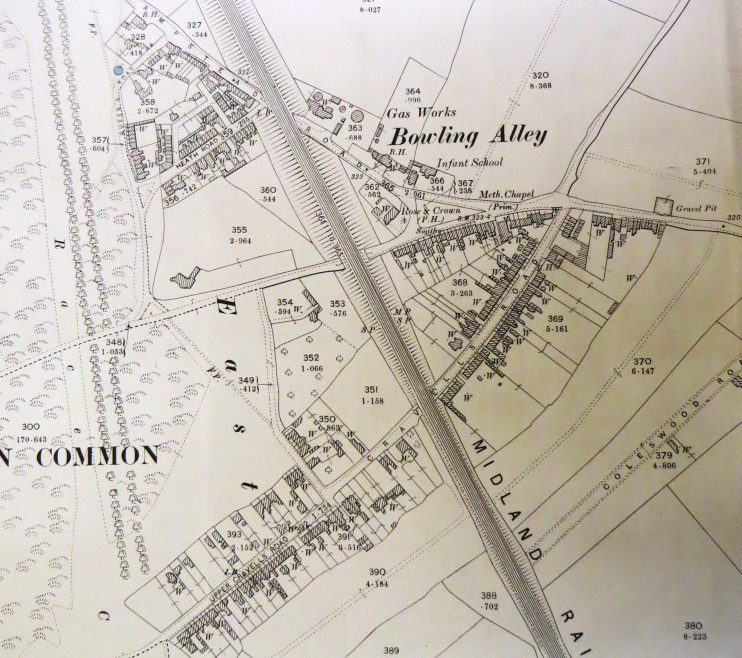 The railway workers were a well-paid, transient group, so it is unlikely that any were remaining in Bowling Alley by 1871. However, surplus land bought for development of the railway was opened up for building. There were still only 51 houses on the triangle, but extensive building took place along Providence Place (where the bike shop is), along Grove Road, and up the newly opened Cravells Road, adding 98 houses, and bringing the population of Bowling Alley up to 600. 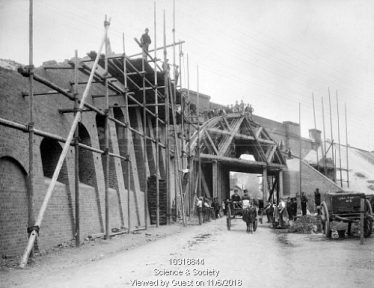 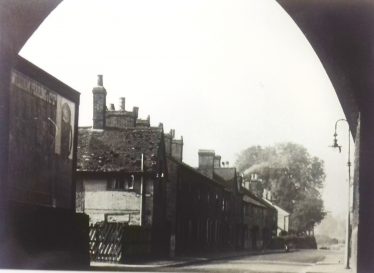 View along Wheathampstead Road, with Heath Road on the left, and The Queen’s Head at the end

George Grey opened a grocer’s shop on Providence Place, which lasted until 1978 – I can remember it. Charles Ogglesby opened a smithy in 1873. By 1900, the family were repairing and making bicycles. By 1918, they were servicing motorcars, and had some of the earliest pumps in Harpenden. They lasted, as Southdown Motors, until the retirement flats were built.

Two wheelwrights moved in, and brick making in the “Prickle Dells” on the Common south of Walkers Road increased. The gas works also provided employment.

Before the expansion, there were four pubs in the Bowling Alley. Two of them remain today – The Skew Bridge aka The Queens Head, and The Plough and Harrow, which is on the site of a much older beer house, whose owners the Catlins, were brewers. The Rose and Crown is now a block of flats next to the Trust Hall.

After the expansion, apparently, four new pubs were built – three in Cravells Road. They were The Carpenters Arms, The George IV, and The Bird in Hand – possibly a forerunner of The Engineer.

Close by the Plough and Harrow was the “Little Mission Room” of St. John’s church, built in 1867-68 to meet the spiritual and temporal needs of the navvies. So there were apparently 8 pubs in the Bowling Alley area, catering for a local population of 600. The navvies must have left in 1868, when the railway opened, so they weren’t using them….

Maps from 1879 and 1898, when Mary was 69 and 89, show that Bowling Alley now had its own School. It is good to know that any grandchildren she had could now learn to read and write, sign the census, and gain information for themselves – i.e. have far more control over their lives. 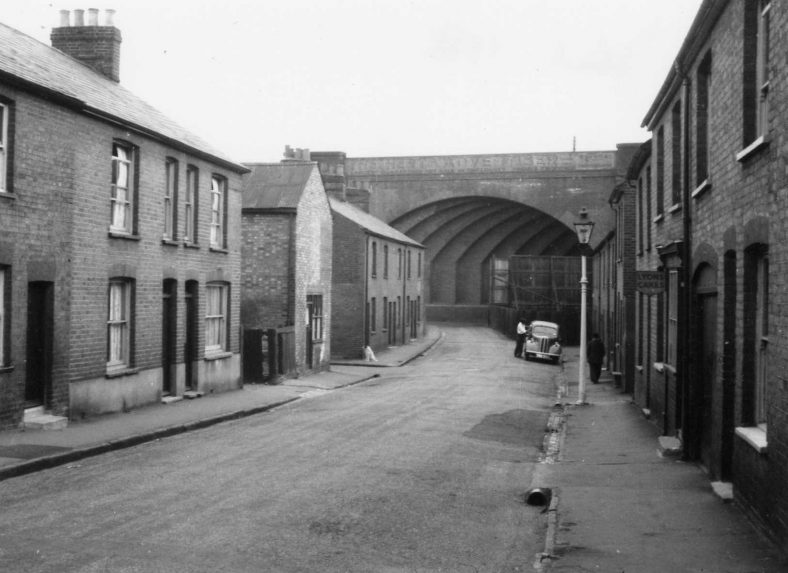 Heath Road in 1955, looking towards the Skew bridge