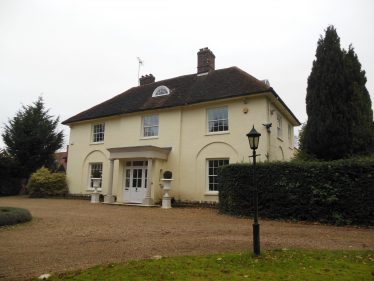 The parish of Wheathampstead with Harpenden was originally a gift from Edward the Confessor to Westminster Abbey. The property on which Aldwickbury Park Golf Course was laid out probably originated as a manor created around 1300 as the Abbey parcelled out land to purchasers.

The first owners were the Pigot or Picot family. As their coat of arms included three pickaxes the original pronunciation was ‘picot’ or similar. The name ‘Picketts’ was used on some maps and may have been the local version of the name irrespective of what either owners or legal documents called it.The name stuck despite changes of owner – Casterton, Colville, Christian and Stubbing before 1698.

Thomas Ashby, a successful London Haberdasher, bought the property from the daughters of John Stubbing in 1698. (See Newsletter 116 for more on John Stubbing and his daughters).

The field names and acreages in the Indenture show, despite several changes of name, that the property was substantially the same as that shown in the auction plan of 1866 (see below). The indenture of 1698 describes the property as ‘the Mannor of Piggotts otherwise Piccatts’ in Wheathampstead parish and adds that some land, called Aldwick, lay in Harpenden parish. The field noted as LOT 2 on the 1866 plan appears to be a remnant of this land. It is now occupied by High Beeches School and abuts modern Aldwickbury Crescent. There was a separate Mansion or Manor House on the property before 1698. It still exists.* Although created as a manor, Piggotts is unusual in that no land was parcelled out to copyholders – it  remained a freehold estate and may never have held manorial courts.

In his will of 1711 Thomas Ashby describes the property as Piggotts Hill, the Manor of Piggotts or The Hill Farm.  He left the property to his third wife Katherine for her life whilst she remained a widow. As he also left her a house in London he stipulated that she spend at least 4 months of each year at Piggotts Hill and strictly limited the amount of timber she could remove from the wood.

Thomas’ eldest son and heir, George, died in 1713. His will left all his property to his four children as ‘tenants in common’ which meant that the longest lived finally inherited all his property. George appointed his younger half-brother Stephen (Thomas’ son by his second wife) as executor and trustee to administer the inheritance. The children were all under 21 when George died so the administration was also overseen by the City of London’s Court of Orphans. The London Metropolitan Archives have the detailed records of this administration which show his net estate amounted to almost £6,000. In his later years Stephen bought three farms, two of which (Limbrick Hall Farm and Leasey Bridge farm) were adjacent on either side to Piggotts Hill, the other was Hamwell or Amwell Farm which comprised several separate pieces of land in Wheathampstead parish. Piggotts Hill is not mentioned in George’s will as it reverted to his heirs on the death of Katherine under the terms of his father Thomas’ will. Katherine’s date of death is unknown but she outlived George.

Two of George’s four children lived at Piggotts Hill – Thomas, who became an MP for St. Albans, and Elizabeth. This was unusual as most of the owners after 1698 did not live there. The land was rented out to tenant farmers. Elizabeth’s will is discussed in detail in Newsletter 118.

None of George’s four children had legitimate issue, but in his will of 1741 Thomas Ashby (the MP) acknowledged paternity of what was evidently an illegitimate son. This son, also Thomas, was well-educated and by 1766 was living with Ann, the last survivor of George’s children. Virtually nothing is known about Austin, the third of George’s children, who married but evidently also died without issue before Ann. Judging from the value of her bequests Ann appears to have added materially to her inheritance from her father and left it all to her nephew Thomas on her death in 1766. A lucky bastard if ever there was one!

Piggotts Hill and other Ashby properties were put up for sale in 1792; Piggotts Hill was bought by Joseph Gutteridge of Denmark Hill, Surrey.

Gutteridge sold a prosperous tannery business when about 40 years of age and devoted the rest of his life to good works. For about 20 years after the purchase he spent his summers at Piggotts Hill and, according to his biographer, set up a Sunday School for Dissenters in Harpenden. The manor was actually farmed by tenants in Gutteridge’s later years: in his daughter’s lifetime the tenant was Thomas Kidman.

Gutteridge was a founder of the Mill Hill Grammar School for the sons of Dissenters and may have influenced the choice of Harpenden as the location for the school in Harpenden Hall founded by the Rev. Maurice Phillips after Phillips resigned as headmaster of Mill Hill in 1818.

Gutteridge added the present staircase to the manor house in 1815. He died in 1844 and left Piggotts Hill to his only daughter, Sarah, whose death in December 1864 brought about the auction of 1866.

The separate piece of woodland shown on the auction plan as ‘Ashby Wood or Stocking Spring’ is shown on modern maps as ‘Little Piggotts Wood’ about a mile away near Amwell.

After Sarah died the the manor was bought by Alfred Loder in 1867. He called the Manor ‘High Firs’ and built the large house, now Aldwickbury School, in about 1870. He was a timber importer and it was probably he who planted the trees around the house. Mr E E Mayor Hetts bought the estate in 1911.

*   Notes from a survey of timber-framed houses in 1970s by WEA/Local History Society members: “Thomas Christian built the timber-framed west-facing wing in 1630, as an addition to a smaller house of which nothing remains. It had a central chimney, baffle doorway and garden court, the wall of which still remains. The SW room was added before the rest of the south front, and the roof of the building was raised during the C18. The timber-framing was bricked-up in the early C18. The south front was built shortly before the present staircase was installed around 1820. The house was refaced, with new windows in the early C20.” 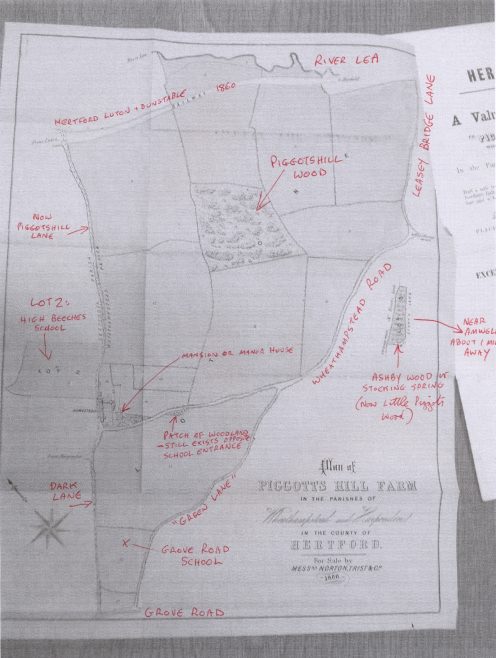 Auction map for 1866 sale – with annotations