George Pearce worked for the family business - then for Dunckleys

Scampering through the eerie darkness of the Harpenden lanes, George Pearce could be seen delivering meat after school. This was at the beginning of his career in butchery which was to last almost eighty years. 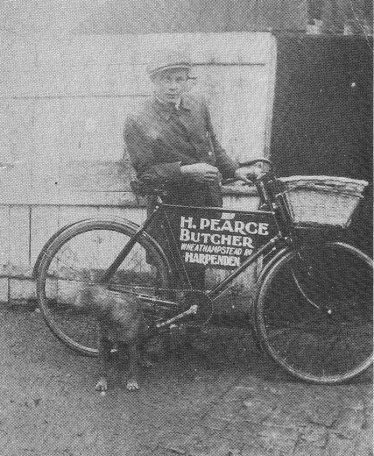 Strolling along the familiar street which used to be known as Wheathampstead Road in Southdown, Harpenden, George Pearce looks, perhaps wistfully, at the huge, new supermarket which opened on July 15th [1980]. Its modern architecture bears no resemblance to that of the tiny, Victorian, structure of St. John’s School on whose site it stands. He was three and a half years old in 1899 when the bell first called him to his lessons across the road from his father’s butcher’s shop, where he lived with his family.

Even as a little lad he was expected to help with the chores around the home and in the shop and to help his father through his long, arduous day, sometimes lasting from seven in the morning to ten or eleven o’clock at night.

Before he ran across to join his friends in the little playground or after school there would be some job to do or errand to run. He remembers the gentleman from the farm in Piper’s Lane who used to drop by with his pony and trap on his way to his club in the evening to order a large leg of lamb for the then princely sum of 12s. George and his brother would deliver it, scampering along through the eerie darkness of the lane as fast as their scared legs would carry them.

Behind the shop was the old barn where the slaughtering of beasts took place and by the time he was twelve, George was capable of killing sheep.  By then he had had to transfer to the school in the centre of Harpenden but the extra miles made no difference to his chores. On Tuesdays, Wednesdays and Fridays he had to run up to the big house, Aldwickbury, a good half mile away, collect their order and return with the meat before setting off for school.

Stock was brought on foot from neighbouring farms and via the LNER railway to Harpenden East station from outlying districts to be distributed, rationing permitted, among the butchers in the town. It was routine to go into Luton to market and George thought nothing of driving his bullocks back, five miles along the road to Harpenden.

Then came the general strike and the day when there was no train to bring cattle from Royston, twenty-two miles away. He remembers clearly, he and his friend, Bert Thompson, were taken there by car, a luxury then, and left to bring back twenty-five bullocks and ninety-five sheep on foot. It was a wet, October day, and they set off towards Baldock at 4.30pm. By the time they arrived there darkness had fallen and the local police gave them shelter for the night and arranged for the animals to be penned.

At six o’clock sharp next morning, they set off again, having decided that Bert would be responsible for the sheep and George the bullocks. At long last George and the bullocks arrived at Wheathampstead, where some of the animals were distributed and eventually a tired and very hungry lad reached his father’s shop. While George tucked in, perhaps to bullocks’ hearts or tongue, dishes the family often ate because at 2s. 6d. they were too expensive for local people to buy, his father extricated his ration of bullocks and continued with the herd to the other traders in the village, returning to enlist, the now fed but hardly rested, George’s help with the slaughtering.

During the time he worked for his father, George received no pay – just the odd hand-out of a few pence now and again, and he had to earn anything extra by plucking a hen or skinning a rabbit. He was a keen footballer and played for Harpenden Town. Many were the times he leapt over the back fence, in order to escape the endless duties and join his team, often to receive a hiding on his return.

However, his father was not a successful business man and with times so hard, debts mounted – to as much as £30 at times – the price of two bullocks, and, when at the beginning of World War One, the Notts. & Derbyshires, and North and South Staffordshire regiments moved into Harpenden, they took over the business for use by their catering corps.

Before a spell in the Army, George went to work for Tom Dunckley, who remained one of the principal butchers in Harpenden for many years 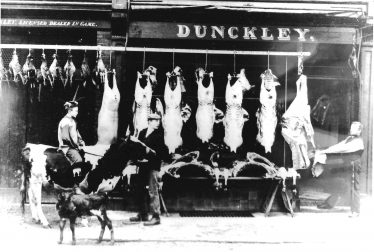 Afterwards. he returned to Dunckley’s only on condition that he was allowed time off on a Saturday afternoon for football. It didn’t work out, however. Two hours off in the afternoon was inconvenient, even if he did return to work until the last customer was served, sometimes as late as eleven pm. So at the age of twenty-five and with marriage in mind, he reluctantly gave up his favourite pastime to safeguard his weekly wage of 38s. Later, he was to enjoy an extra half day off a week, enforced by Parliament, and the addition of one day to his annual holiday, whereas before, even for his honeymoon, his holiday had begun on Saturday afternoon and ended at 7.30am sharp the following Wednesday.

George continued with his butchery, slaughtering, cleaving, serving, delivering, with the help of a horse-drawn vehicle now. Much time was spent scraping pigs’ and sheeps’ intestines for sausage skins. Bread for the sausages was obtained from Jack Irons, a local baker, in exchange for pigs’ heads and hocks of pork which he in turn, used for his three-penny pork pies.

With a life time of experience in butchery, George Pearce retired at the age of sixty-eight when Dunckley’s closed down, but until two years ago he was still to be found giving a hand in the Christmas rush and other times too, back where it all began almost eighty years before, in the shop opposite the supermarket where the old school once stood.