The Makings of Southdown 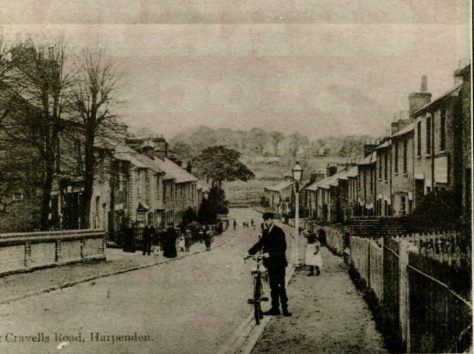 Cravells Road, c. 1900. We think the first post office was in the first house on the left-hand side.

Southdown, or Bowling Alley as it was known, consisted of the lower part of Cravells Road, the cottages facing the green and the area around Heath Road. The area was well catered for with bakers, butchers, grocers, and public houses.

The opening of the Midland Railway London extension in 1868 separated these areas, with the massive embankment we have today, and also created the magnificent skew bridge. 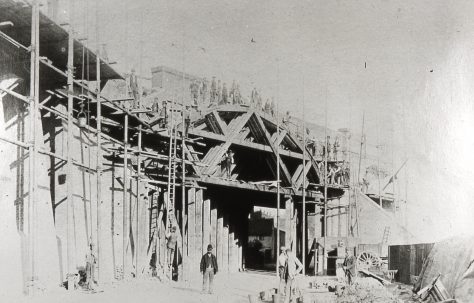 Construction of Skew bridge extension on SE side, 1891. Credit: LHS archives, cat. no. B.54

In order to build the railway, several houses in Heath Road were demolished. More upheaval came in 1891 when the railway here was to be doubled. The original plan was for two tracks from London to Bedford and two more to be added by their own labour, the easy sections being done first, so on 5th September 1891 work started on the second half of the bridge, making it the largest of its kind in the world.

The Herts Advertiser advert was painted on in early 1933 much to the annoyance of the Council.

On the opposite side of the railway, Harpenden Gas Company built their works in 1864. Nationalisation in 1949 saw the end of the works, and it became Southdown Industrial Estate. The gas holders survived until 1987 when they were demolished. The large building fronting Southdown Road was the Head Office and Showroom until it closed in August 1956. 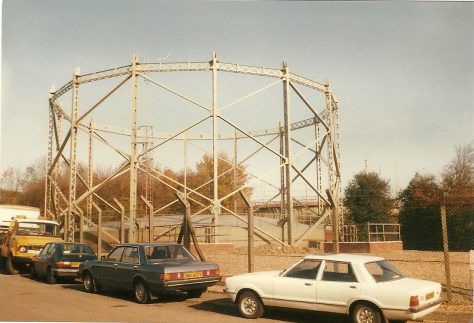 The area had two hauliers, Rolts and Saunders, moving anything from sand to furniture. Saunders started in Cravells Road in 1896 and moved to Southdown Road in 1910. 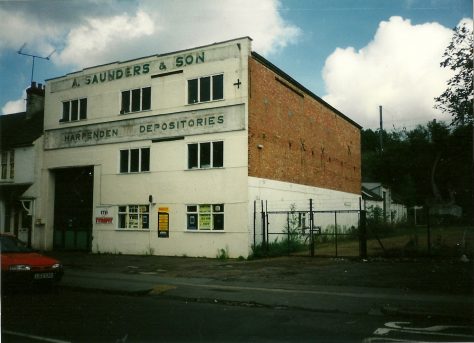 In 1914 they bought a steam lorry and had 30 horses. The warehouse is now Stapletons (replaced by Kings Court flats, c.2005 ed). Rolt lived in Heath Road and also had his stables there. For many years he provided a dustcart to collect refuse for the Council much of this being dumped in the gravel pits that were on both sides of Grove Road. When he ceased in 1943 Saunders took over the business.

Overlooking the green was Oggelsbys Blacksmiths from 1873 to 1923 when they moved to their other site on the corner of St Johns Road, where they had been from 1878 and lasted until 1958.  Stevenson & Spence the builders then established a yard on this [St John’s Road] site and today St Johns Court stands here. The former smithy on the green was converted into a garage and in 1945 the house beside it was demolished and a showroom built.  South Harpenden District Motors took over in May 1959. (This has since closed, and been replaced by retirement homes in the mid 2000s ed.)

In Grove Road, a Rubber factory was founded in 1910, became an engineering factory, Brauer, 1945 to 1981 and now Pan Auto Services from September 1983.  Further along near Coleswood Road was a chicken farm run by Mr Bonser until 1949 when he emigrated to Australia.

Fields Hat factory, originally where our fire station is now, moved to Grove Road before moving on again to a new factory in Kingcroft Road. The factory was taken over again in 1936 by the Atlas Basket Company, who made wood chip baskets, starting with a tree trunk and cutting these to make baskets used for water cress and tomatoes.  A large crane dominated the area and was used to move the trunks.

The former site in Grove Road, now having just been redeveloped with houses, was the home of Fosters Coaches from 1960, later Kingsman until they left in 1978. 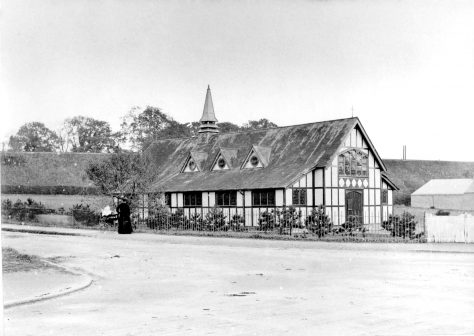 St Johns Church started at the corner of Crabtree Lane and Southdown Road, and was known as “Paper Church”, such was its construction. Unfortunately on 31st December 1905 a spark from the store set fire to it and it was burnt out in minutes. Sir John Lawes of Rothamsted gave a new site and work started on the new Church in 1906 and was consecrated 2nd March 1908. 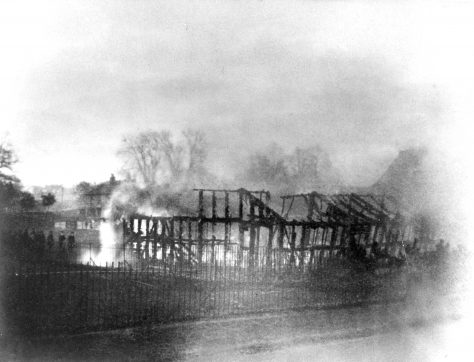 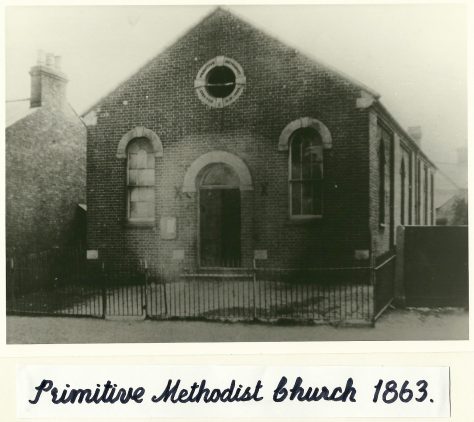 The first Methodist Chapel was built in 1863 and replaced in 1899 by a new one opposite, and this in turn was rebuilt and reopened in May 1970. 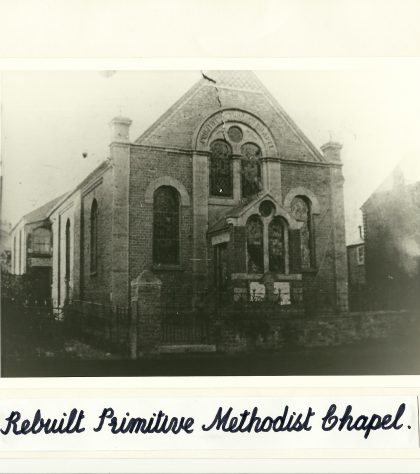 The 1986 Church on the other (north) side of the road became the Church Hall. This, and St Johns Church School were demolished in 1979 and a new supermarket complex built with a church hall upstairs.

The Salvation Army Barracks was in Heath Road until they moved to Amenbury Lane and the former barracks became a reading room in February 1907 and later home of the Welcombe & Rovers Club, which was demolished in 1967. The Harpenden Trust bought the former St Johns Hall, built in 1906, and renamed it the Trust Hall.

Change came to the area when the Grove estate was sold in July 1933 and the Sibley Avenue area built. Piggottshill Lane was widened in 1930 and Longfield Road was built in 1931, the houses being built by a Housing Association. Walkers Road, originally built in 1888 was rebuilt in 1937. The change of name for the area from Bowling Alley to Southdown was recognised in 1923 when Wheathampstead Road was renamed to become Southdown Road.

This development brought the need for more shops and a parade was built on the corner of Southdown Road and Piggotshill Lane in 1935 and included a hardware shop, electrician, wool shop, Post Office and a Pharmacy and a butchers. 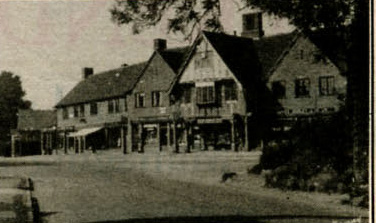 On the corner of Cravells Road was Timsons shoe shop and it was in his garden that a street memorial for War Dead was erected in June 1917, as there was no room on the Heath Road one. (NB is there any record of the Heath Road memorial and the names on it? ed)

The notable change was, as mentioned when the Methodist Church Hall was demolished and Fine Fare built a new supermarket opening July 1980, to be Gateway and later Somerfields from November 1991 (now Co-op, with replacement Post Office, from 2010 ed.). The large car park helped solve the areas parking problems. 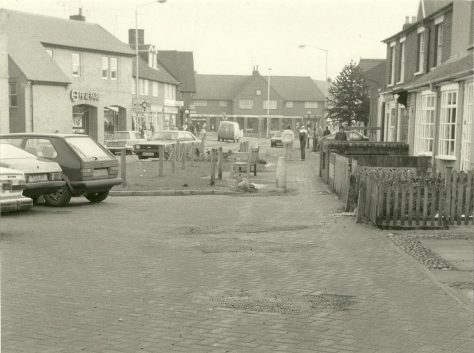 With the exception of the shops lost when the Heath Road area was redeveloped in July 1964, Southdown has remained a self contained shopping area.