Geoff Woodward spoke to the Society on 25 June 2013. This report first appeared in Newsletter 120. 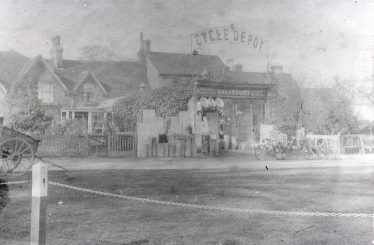 For someone who doesn’t like shops and doesn’t like shopping, Geoff Woodward has nevertheless spent much time over the past forty years since the early days of the Local History Society in meticulously recording every scrap of information he could find on the origins and fates of some 2000 shops which have come and gone from Harpenden High Street and Station Road since the 1890s. Geoff’s lifelong interest in railways, fostered from when he spent long hours in the signal box of Harpenden East station as a child, and research into the origins and growth of railways, drew him into local history and his first book published by Oakwood Press was warmly received because of its combination of railway and local history.

When the Harpenden & District Local History Society was founded in 1973, four research working groups were set up. Only the Trades and Industry group, initially led by John Smith of St George’s School, settled into long-standing work, with Geoff meeting with Eric Brandreth and Les Casey every Wednesday evening to put together an inventory of all the shop premises – their opening and closing dates, together with photos (Les’s contribution). They started by setting up a card index for every ‘shop’ unit, only to find that over the years two might become one, or one shop be divided into three, and other discrepancies. Using maps, early directories, Kelly’s directories, Rate books and papers inherited by the Society from the Urban District Council, they trawled documents in the County and Public Record Offices, various Hertfordshire libraries and scrutinised the many newspapers which had advertisements and columns on Harpenden (news items, court cases, obituaries) and including the Watford Observer, Luton News, Herts Advertiser, Harpenden Gazette, Harpenden Free Press, sometimes in hard copy, but often in unfriendly microfiche. The card index was supplemented by loose-leaf files of photos and the main details on each shop, and discrepancies in information have been recorded – Kelly’s directories are not always accurate, spellings change, obituaries and memories can be inaccurate. Old photos can sometimes be identified by details of brick or woodwork – a photo of staff outside Gibbons boot repairers turned out to be at temporary premises, with Kelly’s recording only the refurbished shop to which the business returned within the year.

Many early shops were not traceable, and were often just the front room of a house. However, as Kelly’s Directories became more comprehensive, it was sometimes possible to trace back to early shops – such as the Salisbury family who settled in Leyton Road (now Inn on the Green) and in 1880 built a tin hut in the front garden (later Mary Ellen’s tearoom). 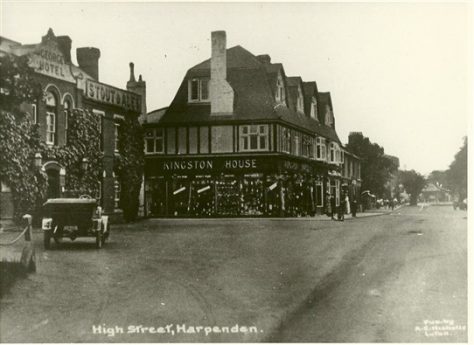 When Dr Kingston’s house in the High Street came up for sale in 1912, Henry Salisbury obtained planning permission on 11 November and by 19 December 1912 he had demolished the house and built ‘Kingston House’ ready to start trading in ironmongery and household goods!

In the 1890s a few shops were established on the ‘Island’ – opposite Anscombes in Leyton Road. But many shops closed down during the First World War, with the men away and their wives struggling to manage large families and having problems in getting supplies to run the business. 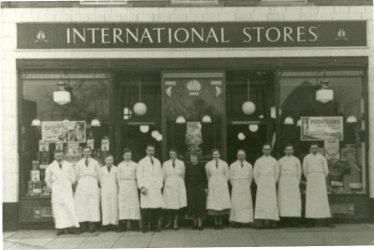 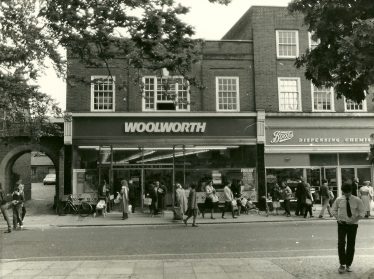 Woolworths and Boots arrived in the 1930s

Bakers such as Rowes, Parcell, Ackroyds and others traded in Kinsbourne Green, Southdown and Batford as well as the High Street. Bread was baked daily – and local bread ovens were available to help roast Christmas/Sunday dinners. There were several dairies – Watlers, the Luton Co-op, and Harpenden Dairies (a co-operative of several local farms) from 1921-1950, run by Cllr Gingell, who introduced the 1/3 pint bottles of free milk for school children – a scheme later adopted nationally. The various dairies caused consternation when, within a few months, all stopped Sunday deliveries, and people had to invest in refrigeration! 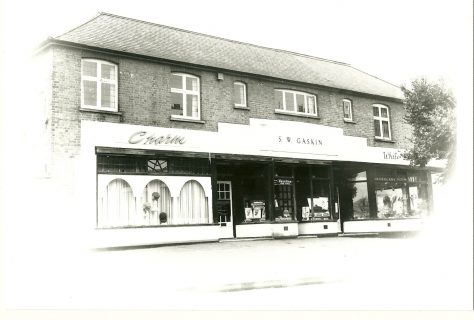 In the late 1930s Broadway Hall was built (where Sainsburys now stands) providing 16 to 25 stalls, giving a chance to small businesses. The Second World War also saw the closure of many small shops. Others had to cope with the complexities of rationing – with several local shop-keepers in trouble for fiddling (some inadvertently?). As businesses re-started after the war, restrictions on materials for new nameplates led to Ella Cherry’s shop on Leyton Road being changed to Charm (Mrs Jarman’s hairdressers) using some of the same letters.

Most supplies still came by rail. Reps would visit the shops, take their orders, with delivery by rail and cart. Hammetts fishmongers pursued several court claims against the railway for breaking the fish crates, so ice was lost and fish arrived ‘only fit for manure’. Mobile shops, such as Bindy Almond, Ronalds and Jeff Archer served the growing housing estates.

In the 1950s Luton Co-op opened what seemed then a large ‘supermarket’ in Batford – and Fred Ackroyd’s grocery/bakers shop had to fight the competition. On Church Green Batchelors’ Row was pulled down for the building of the first Premier Supermarket (soon MacFisheries) in the village – a measure to ‘modernise’ shopping, which has gone on unabated. When the Pamphilon family, owners of Anscombe’s Department Stores in Leyton Road, were offered £1 million for the site in the 1980s there was no way they could have earned that by continuing to trade. Now most remaining shops are leased from absentee landlords, with rents rising relentlessly.

Geoff and Sue Woodward left Harpenden in 2009, and appealed through the Society’s Newsletter for a volunteer to supply information about the opening and closing of businesses in the High Street and Station Road. Alan Bunting has continued to take photos of changes – but without the supporting information Geoff can no longer keep up the detailed record. Information on some 2000 shops is stored in 27 files covering the period 1890 to 2010.

Is any member willing to take on this task, so that Geoff’s record is maintained?

In the History Centre archives we also have boxes full of business letter-heads awaiting sorting and tying in with Geoff’s records of shops and other businesses. In time, we would like to be able to include pages on the Website about each shop premises, with Geoff’s notes and a photographic record of the many changes – but for this too we need volunteers.