Reports from the contemporary press of incidents that came before the courts. 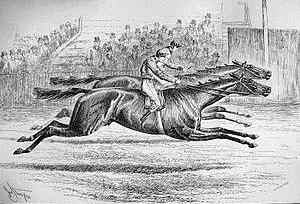 Horse racing is one of the longest established spectator sports in Great Britain and has been part of our national heritage for hundreds of years. At Harpenden occasional races were organised on the Common during the 1830s and 40s but the first of the regular events took place on Wednesday 21 June 1848, attracting an estimated 10,000 racegoers. The Sunday Times of the 25 June reported the event:

“The meeting went off in the most successful manner. The day, fortunately, was as fine as could possibly be desired. The attendances were extremely numerous and included many of the principal residents of the surrounding district. Harpenden and St Albans must have turned out to a man to participate in the day’s pleasure – for, that it was a day of pleasure in every sense of the word to those who were present we are quite certain, judging from the happy and smiling faces which everybody possessed. The utmost regularity and order prevailed throughout the afternoon, and civility and attention from the officials ensured good fellowship and a friendly feeling amongst all parties.”

On that day there were four races with preliminary heats. Racegoers placed their bets and followed the fortunes of horses with evocative names such as Martin Chuzzlewit, Sweetsauce, Maniac, and Mind-your-own-business.
The Sunday Times Digital Archive, 25 June 1848

In the early days, racegoers from the capital used the London and Birmingham Railway, which opened in 1837, to come to Harpenden Races. This was the earliest line passing through Hertfordshire and when passengers reached Boxmoor, they travelled by post-chaise to Harpenden through Hemel Hempstead. In 1850 the Great Northern Railway opened a line from a temporary terminus near Kings Cross to Hatfield, and some visitors came to Harpenden by hired coach from there.

The race meeting was initially a single day event and large crowds from all classes turned out to enjoy the races and to see the sideshows. On Friday 29 May 1851, for example, racegoers arrived early:
“Long before the time of starting the scene on the common was of a very animated character; lads and lasses seated on the grass laughed right merrily, whilst numerous parties of the upper classes seemed determined to have a pleasant day out. A little good temper on the part of the police was desirable. The poor itinerant acrobats and minstrels had but a sorry time with them.”
The Sunday Times Digital Archive, 1 June 1851

In 1858, the first railway station in St Albans (now known as The Abbey) was built by the London and North Western Railway, just four miles from Harpenden. This station proved very popular with racegoers and the number of visitors from London increased.

On Friday 14 May, the first special ‘monster train’ left Euston Station with a huge crowd on board, travelling to St Albans for ‘exceedingly moderate fares’. On arrival, however, the supply of carriages to convey racegoers to the course did not match demand so a number had to walk from the station. Among the visitors that day was Mr Laws from London and after the races he caught the special train back to Euston Square. He may have had a good day at the races, but he was in too much of a hurry to avoid the crowds and make for home. On arrival at Euston, he tried to leave the train while it was still in motion, fell under the carriages and was cut to pieces – a tragic end to his day. Source: The Sunday Times Digital Archive, 16 May 1858.

Almost any event in Victorian England with a large gathering of people brought crowd disorder, ‘ruffianism’ and petty crime. In the early years, pickpockets and card-sharpers mingled with the racegoers at Harpenden and some appeared before local magistrates courts. Plain-clothes policemen were employed in 1881 to tackle theft, but apparently respectable scoundrels were also present, bent on more sinister crimes.

On 10 June 1885, Emma Dickerson, who was 19, her sister, Martha, and Marion Harding, a family friend, were enjoying their day at Harpenden Races, when a party of ruffians tried to rob one of them. Two young men intervened to protect them, introducing themselves as Frederick Deans and James Macdonald. They continued walking with the three young women, talking mainly about horses and in the evening, by appointment, they all met up again near St Albans Town Hall. A week later, Emma Dickerson received a letter from James Macdonald and went out with him. He told her he had a business abroad and over the following month their relationship developed. ‘He came down to St Albans, chiefly on Sunday,’ Emma recalled later, ‘I also saw him in London and went to the theatre with him. Our conversation was such as men and women talk about, about love. He gave me a brooch, ear-rings, and a ring, which I wore on the third finger of my left hand.’ Emma understood that after they were married, they were to go to Africa, a pleasant voyage as Macdonald would be captain of the vessel.

Not long after this, Emma spotted a report of a bigamy case in a national newspaper. Martha went to the preliminary hearing at London’s Guildhall and discovered Macdonald had given them a false name. He was James Malcolm, a married meat salesman, whose wife was still living. The previous April, he had committed bigamy by marrying a Miss Dash in Brighton and then disappeared until he was recognized by a wedding guest and arrested in the Metropolitan Meat Market.

On 10 October 1885 his case was transferred to the central criminal court at the Old Bailey. The evidence against him was complex and the trial lasted a week. Reported in the press nationwide, it aroused huge public interest and became known as ‘The Brighton Bigamy Case’. Emma, Martha and Marion Harding testified against James Malcolm, telling the court how they first met him at the Harpenden Races.

Malcolm was shown to be ‘deeply steeped in vice’ and to have committed ‘detestable’ acts of fraud against his principal victim, Miss Dash. In summing up, the judge also berated him for his actions at the Harpenden Races:
“You impudently introduced yourself to a poor young child like Emma Dickerson, 19 years old, endeavouring by the same course of conduct to debauch her, to blast all her hopes for life, and ruin her as far as you had done with Miss Dash. You are one of those men who prowl about the streets and places around London looking out for women you may devour. Unfortunately, weak women fall in your way.”

In sentencing James Malcolm, he meted out the severest punishment the law permitted for bigamy – seven years’ penal servitude. The following year Malcolm’s wife divorced him and arrangements were made for her to petition for support for her two children when he was released from prison.
Emma and her friends escaped theft by ruffians, but the experience of being duped by a plausible scoundrel and the humiliation of the trial, with its attendant publicity, must have left them with bitter memories of their day at Harpenden Races.
Old Bailey Proceedings Online (www.oldbaileyonline.org, version 7.2)
10 October 1885, trial of James Malcolm (t18851019-982).
The Times Digital Archive 26 Oct 1885 & 26 Feb, 1886.

James Green was another race-goer who must have regretted his visit to Harpenden. Throughout the nineteenth century a large number of men and women appeared at the Old Bailey charged with making and passing counterfeit coins. In terms of sheer numbers of cases, coining offences reached their high point in the 1860s, when over 2,300 cases were heard.

Circulating counterfeit money, known as ‘uttering’, was common at large gatherings such as race meetings and when James Green attended Harpenden Races in 1882, he received a number of counterfeit coins. Knowing them to be false, he tried to use them to buy tots of whisky and rum in London’s public houses. A barmaid, more alert than he expected, summoned an officer and he was arrested but later discharged. When he tried the same trick a second time he was brought to trial, indicted for unlawfully uttering counterfeit coins. Expert opinion was summoned to give evidence in court:

“I am inspector of Her Majesty’s Mint—this is a bad half-crown, and this is a sixpence, gilt very thickly and very likely to deceive—it is precisely the size of a half-sovereign; the head is exactly the same; the only difference is there is no half-sovereign with a reverse like this—it is a sixpence of the stamp of 1816.”

James Green, aged 20, offered no defence and was found guilty. Enquiries showed he was respectably connected but had been unemployed for almost a year. He was sentenced to two months’ imprisonment without hard labour.
Old Bailey Proceedings Online, 26 June 1882,
trial of James Green (t18820626-615).