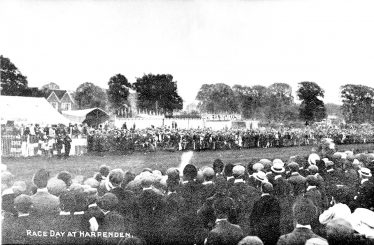 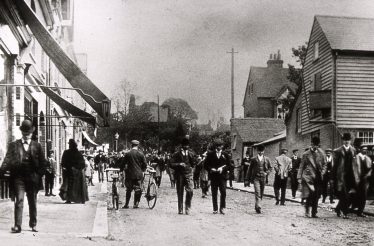 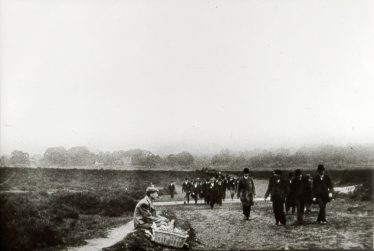 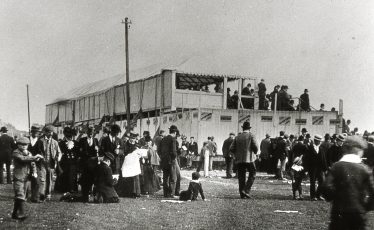 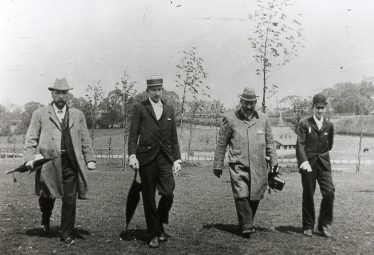 zoom
The officials walking the course
LHS archives, cat.no B 3.72 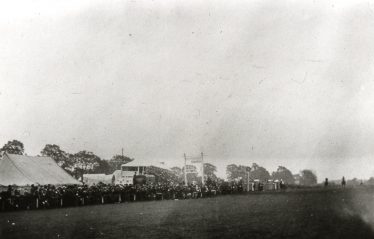 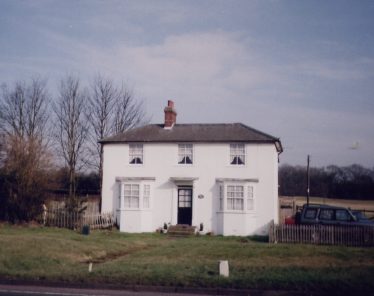 Horse racing was a popular and rapidly growing sport during the first half of the nineteenth century, and this part of Hertfordshire was well to the fore in its development.

Occasional races were held on Harpenden Common during the 1830’s and 40’s.  Sir Thomas Sebright, Master of the Hertfordshire Hounds arranged one there in August 1834.  Henry Oldaker was also organising occasional races in the area, and there is a record of one of these finishing on the Common.  This was run on Tuesday 10th December 1839, from Friars Wash to Harpenden Common via Rothamsted Park and was won by Captain Becher.

But regular racing on the Common did not become established until 1848.  A committee consisting of local farmers organised a meeting on the common on Wednesday 21st June 1848.  It consisted of four races, and was followed by a dinner at the Bull for the committee and others.  About 10,000 people were present at this first meeting: it was such a success that a more permanent committee was formed to make it an annual event.

The course was in the shape of a long narrow horse shoe starting on the Common near what is now the Golf Clubhouse; crossing Walkers Road, which was covered with straw for the occasion; then sweeping out into the country beyond Cross Lane; over the fields of the Childwickbury Estate behind what is now Horse and Jockey Farm, but was in those days a public house; and then turning near Ayres End Lane to come back along the Common.

Not all the races were run over the same distance.  There were eight races in 1863: three were over a two mile course, three over a course of just over half a mile, one over a mile, and one over a mile and a half.  Some races attracted more horses than others.  The Wheathampstead Stakes, run at four o’clock over a course of four and a half furlongs, attracted six runners.  Each owner staked five sovereigns to enter, and an extra thirty were added.  The second horse kept its stake, the winner took the rest, but had to pay two sovereigns into the funds.  It was a rule of this race that the winning horse was to be sold by auction immediately after the race.

Harpenden races were run under jockey club rules and stewards were appointed to see that the rules were observed.

Excursion trains for a gala day

These were the days before radio, television and the cinema; days when people made their own amusement, and any excuse for a gala day was gladly seized upon.  The day of the races was such a day.  Anyone who could take a holiday did so, not only to see the races but also to enjoy the various sideshows that were set up, rather like those that attend a fair nowadays.

On the day itself the railway companies ran special trains with cheap excursion fares, and great crowds came from London and round about.  Amongst them were many roughs, card sharps, pickpockets and other riff-raff of humanity.  Fights and uproars were very common both on the course and in the evening in many parts of the village when the races were over.

The crowds arriving at the Midland station were met by rows of horse drawn waggonettes (rather like a rank of present day taxis) for those who didn’t want to walk up across the common.

The last race meeting on the Common was held on May 7th 1914.  The meeting for 1915 was advertised, but in the middle of May the Government cancelled all racing except that at Newmarket.  The reason given for the ban was ‘the necessity of keeping the railway system free for the rapid and unimpeded transit of troops and munitions’

It became apparent during the war that the Jockey Club did not approve of open courses such as Harpenden; partly because there was no way of making people pay to watch, as there is on enclosed courses, but also because they did not like courses with temporary structures such as Harpenden’s grandstand.  There was a doubt as to whether or not a licence would be granted after the war.  So, on the 8th August 1918 all the equipment was auctioned on the Common and the proceeds given to the Red Cross.  When racing was resumed nationally in 1919, the Harpenden Races were no longer part of the Racing Calendar.  All that can now be seen of the course is a square of trees surrounding a car park on the edge of Limbrick Road, these mark the site of the paddock.

There is though, a postscript to the story of the Harpenden Races.  During the first world war, the Admiralty ordered a fleet of thirty two paddle minesweepers, and named them all after racecourses.  HMS Harpenden was commissioned in 1918, and served in Home Waters and the Baltic until December 1919, when she was paid off at Sheerness.  She was then, in January 1920, berthed at Harwich for disposal, and eventually sold for scrap in 1928.

The ships bell was acquired by the Right Honourable J C C Davidson MP for Hemel Hempstead Division, and presented to Harpenden Library in 1930, where it still remains as a reminder of the races which were an important day in the life of the village for sixty seven years.