The Racecourse, a Recollection by A W Boutwood In my childhood, I was told by my father, who was born in Harpenden in 1880, that the underlying reason for the abandonment of the Harpenden Races* was a series of tragedies caused by excessive gambling resulting in a spate of suicides.

My grandmother, Jane Boutwood nee Willmott, was the daughter of Henry Willmott of Home Farm and owner of other farms in the district which had been frittered away by my great-uncles. The Willmotts were friendly with the Cattermoles, substantial carriers and transporters in London whose business became absorbed in Pickfords. The Cattermoles probably bought horses, hay etc. from the Willmotts.

Jane Willmott became engaged to one of the Cattermoles and their marriage was arranged. They went in a party to the Races and Jane found the state of the course distasteful. Apparently it was so muddy a number of shoe-blacks lined the entrance to clean the footwear of visitors. Jane was very fastidious and haughty: she had her footwear cleaned no less than five times, whereupon Cattermole told her that she had impossible standards with which he was not inclined to cope and broke off the engagement. As a result, Jane switched to my grandfather who was working with Cook, Sons & Co., the St Paul’s churchyard merchants, and also had a finger in various Harpenden enterprises. They were married, my father, their first child, being born a few years later.

Catering for the Racegoers

My grandfather virtually retired upon the marriage, in his early thirties, but as my grandmother’s resources, although useful were not inexhaustible, he became interested in local affairs. One enterprise was the catering for the Races; quite a big undertaking, but I have been told that my grandfather’s sole involvement (except as an entrepreneur) was to trot round with a Gladstone bag from time to time collecting the takings from various catering points so that temptingly large sums of money were not left in the hands of the staff. I imagine that the cooking etc. was carried out by sub-contractors. Apparently my grandmother descended sufficiently from her Olympian heights to observe that the cooking was done wastefully and that considerable quantities of dripping were wasted when joints were cooked. The poor in the Bowling Alley might have been glad of it but my grandmother ordered that the dripping should be collected and sold for the benefit of the main contractor i.e. her husband.

The proceeds over the remainder of the period of grandfather’s concession amounted to a sum large enough to purchase a house “Park Villa” in Luton. I need hardly add that it was bought in grandmother’s name. My sister and I, on hearing this story, renamed the house “Dripping Villa”. My grandparents occupied it in their old age. They had been married before the Married Women’s Property Act came into operation and as my grandmother died just before the Birkenhead legislation was coming into operation, my grandfather became entitled to the house for the remainder of his life under an extremely rare tenure known as “tenancy by the Courtesy of England”, with reversion to my father as heir-at-law. Somewhat typically my father relinquished one half of his rights in favour of his brother.

* For a full account of Harpenden Races, see Eric Brandreth’s linked page and his 1981 monograph, re-printed by the Local History Society in 2014. 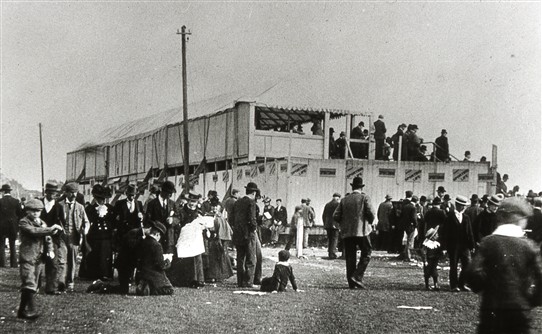