Below are two letters to the Editor of Hertfordshire Countryside in response to the ‘Ken’s Kingdom’ article which had been published in the July 1987 issue.

Would Ann and/or Lucy have ever met any of these Sisters I wonder? ed.

‘Oh, how that article generated nostalgic memories and took me back to a life I knew so well, many years ago. 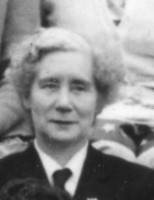 I was a Sister in the N.C.H. for some 27 years, 21 of which were spent at the Harpenden Branch. I knew Ken and May very well. The upstairs flat shown in the photograph at the bottom of page six was my home for many years. The whole house originally accommodated 25 boys at a time when boys were kept at one side of the ‘Oval’ and the girls on the other side.  ‘Never the twain shall meet’!!!  Even brothers and sisters were separated at the gate when they arrived and were only allowed to walk together for half an hour on a Sunday afternoon in front of the Church.

The mixing of boys and girls gradually took place and the size of ‘families’ was reduced to ten, with one Sister and a helper to care for them. This of course allowed for much more individual attention.

I retired nearly 20 years ago and many changes have taken place in the way that children are cared for since that time.

I enclosed a copy of an article which I wrote for my local church magazine here in Plymouth which may be of interest to you and which you may care to publish.

NOT A JOB BUT A CALLING

For 27 years I was a Housemother in the National Children’s Home. Consequently I nurtured many more children than most mothers do. Normally I cared for ten children at a time in a family group. All these children came from a wide range of family backgrounds. This was no ordinary ‘job’ but a calling, a way of life, no five day week of seven hour days. No overtime. No bonuses. No profit sharing. My colleagues and I worked happily for six and a half days every week, and sometimes for a full seven days. Each day lasted for a full 24 hours and we were fortunate to get a few weeks annual holiday.

In such a family group one was not only mother but father, teacher, chastiser, comforter, confessor, nurse, cook and chief bottlewasher. No, no I am not complaining, just stating facts. The work was hard physically, mentally and spiritually; it left little time to pray. However, prayer was frequently my only help and comfort. Often one went to bed exhausted and tearful. “Am I inadequate?” was the question on my mind. Johnny had kicked the cat, Jimmy had stolen a pound note, Jenny had been bullying some of the little ones. Where was I going wrong? Without the comfort of prayer I could not have carried on. The next morning all these thoughts had gone and I was ready with God’s help to start a new day refreshed.

Do I hear you say “Why did you do this job for 27 years?” The answer is that there were many compensations. There was much love, fun and laughter in the home. There were the lovely days when we took a picnic into the country. The days when we had parties and entertained friends. Children may make you sad at times, but more often they make  you laugh.

Were you to ask me or any one of my colleagues whether, given the chance, we would do the same again, you would receive an overwhelming “Yes” in reply.

It is great joy when your ‘children’, after they have grown up and left ‘home’, return with a wife, or a husband and later on as their family grows, their own children and grandchildren. The cry of ‘Auntie do this’ or ‘Auntie look at that’ echoes round the rooms – it is at times like these that one realises that the years spent caring were not wasted.

For a photo and short history of Anne Pearl and other Harpenden Sisters go to http://www.theirhistory.co.uk/70001/info.php?p=10

The article is very interesting to me as in October 1939, I went to Harpenden for a year as a ‘candidate’ in Ashcroft House.

I rather think the Bill Fordham distributing provisions in his handcart was the same little red-haired boy often teased by his contemporaries and I was the unwitting victim of one such prank. Boots were taken to Cobbler each week for repair, and one day the boy responsible for this duty had laid a trap for Bill who was expected to come next through the sitting room door into the dark corridor and fall over a sack. Alas, it was I who came and in my fall smashed the whole tray of cups and saucers I was carrying from the Sisters’ tea table!

The previous eight months I had done my candidate period of training at Penarth and should have gone on to the Training School at Highbury. However, with the onset of war, we were all re-directed to the Branches, eight of us going to Harpenden where, in addition to helping in the houses we were expected to do several hours’ study each week until it was considered safe for us to go to London.

I enjoyed that year in Ashcroft and felt myself very fortunate as I was the only member of that staff who actually enjoyed taking out the boys on their Saturday and holiday excursions and Sunday afternoon walks in the countryside. I shall never forget that summer Sunday when we watched breathlessly a brood of baby blackbirds emerging from their shells, nor the Saturday afternoon when Charlie, a boy with a severe heart condition, managed to fall into the Silver Cup Pond on the Common and I was at my wits’ end as to how to get him safely back home with a bunch of mischievous little boys on my hands.

How I remember those ‘early mornings’. The staff took it in turns to rise and wake the boys, superintending the turning of mattresses, seeing to wet sheets, the preparation of breakfast and a host of other jobs all to be completed before the two other Sisters came down to take their share. An amazing amount of work was done in those days, cleaning of silver – even saucepan lids – boiler cleaned out and polished with blacklead, corridor floor scrubbed, dayroom and dining room floors polished, bedrooms and stairs swept, bathroom cleaned . . . a dizzy routine of ‘Will you see my work Sister, I’ve finished.’  One could hardly blame the boys who whizzed a few knives and forks through the kitchen window to save cleaning – alas, these had to be counted every morning and found by the unfortunate member of staff on duty! In later years when I was a Sister in charge of a family of boys on the Lancashire moors, I altered this morning routine, dramatically reducing it to a minimum, but in 1939 it was still very sacrosanct.

I came back to work at Harpenden for three years in charge of Morcom Lodge 1961, following my husband’s breakdown in health and the sale of our farm. I found, of course, a great deal of change, much of which we had urged in our staff meetings and studies for years. I think the ‘Ken’ who used to whizz past Morcom Lodge with the gang-mower on the Oval must be the same Ken who is still carrying on this lonely duty now. In 1961 there were three gardeners but it was very disheartening to find that the trim little gardens behind the houses so proudly and carefully nurtured in the old days by the boys and girls themselves now seem to have been abandoned, nor were vegetables being grown in the Branch gardens as previously.

Certainly it was good that the children now had more contact with the outer world, as we had been urging for years, but something also had been lost. In spite of all that rigorous routine and discipline in those early years, Harpenden, like so many other Branches, had been a real ‘home’ to so many children. I cannot help feeling sad about those empty houses now, although having been a Children’s Social Worker for many years prior to my retirement, I know the emphasis is now against residential care wherever possible. Yes, the Oval was a precious symbol, not to be played on, but a Sunday afternoon privilege was that brothers and sisters (alas from different houses, another unnecessary restriction) were allowed to walk the paths around the Oval together. As we Sisters drank our after dinner cup of tea in the sitting rooms, we were often amused to see that this was very convenient for a bit of legitimate courting as naturally the sister would bring her girl friend and brother his boy friend and what a happy quartet that could be.  Otherwise courting had to be confined to ‘safe’ places like ‘behind the laundry’ – a favourite spot

I remember, too, that German airman and his parachute dangling from the trees on the Oval in 1941.  By that time I was working at the Sutton Coldfield Branch and had cycled down for a couple of days with a colleague.  We set off back in the very early morning mist and with a shock got off our cycles to investigate this all too real looking apparition.

The woods in Maytime were a wondrous sight with the haze of bluebells and, whilst I was glad in the 1960s that the children could now play down there, I was sad to see the litter and untidiness no one seemed to care about and to watch boys using as a sledge part of an old tin trunk which had obviously been used on many journeys by our much-loved Principal, Mr Litten, whose name it still bore. (Mr Litten is one of the ministers in the group photo above ed.)

I spent eight years happily working in various parts of the ‘Home’ and like Ken often wonder where some of those boys and girls are and what they are doing. I have several pages of snaps of the Ashcroft boys – the eldest bringing in the Christmas pudding, picnic tea on the front lawn, fishing for tiddlers in the favourite picnic spot, trying on gas masks, on slides and roundabouts at Rickmansworth [ed. Rothamsted?] Park, cooking sausages round a camp fire and so on.

If ‘Ken’ is still the same as in 1961-4 I would pass on my kind regards. I think he must have come into Ashcroft the year following mine as I don’t seem to have any record of him then. Like Ken’s wife, I still have my Ordination Bible and those years of dedication have a very special place in my heart’.