On 1 June 2013, Harpenden Red Cross Society mounted an exhibition to celebrate its first 75 years.* This covered the wartime First Aid Post, Ambulance Division, many community services and support for national and international emergencies. The text below has been summarised from the exhibition displays prepared by Marian Donaldson, and illustrated with photos taken at the exhibition. 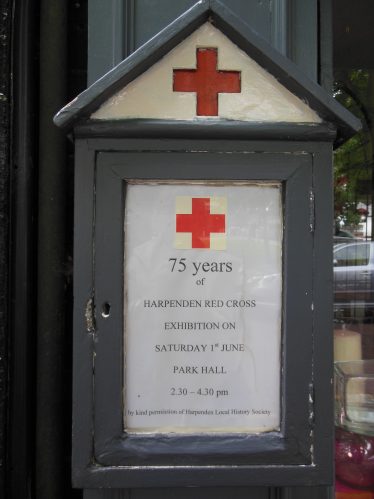 In 1938, as the threat of war loomed, Harpenden Red Cross Society was established with Mrs Kathleen Doveston as Commandant – a position she held throughout the war. Recruitment took place during 1938 and 1939, and members were trained in First Aid, Nursing and Anti-Gas procedures at Park Hall. 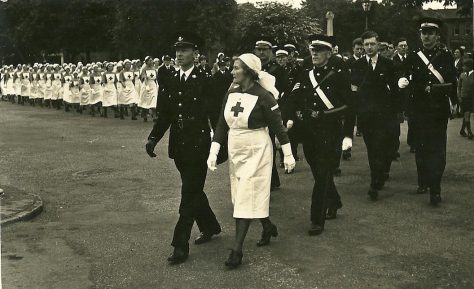 At the outbreak of war, a First Aid Post was established in the recently vacated school buildings in Victoria Road. Members cleaned and repainted the walls and furniture, scrubbed and polished all the floors, and installed medical equipment provided by the Government. This was supplemented by items, such as a fridge, lent by local residents. Other equipment was bought after fund-raising.

The First Aid Post was manned night and day throughout the war, in four shifts with a minimum of three staff on duty. Its main purpose was to be in a state of readiness for air raids at any time, but many functions would now be seen as part of the National Health Service: 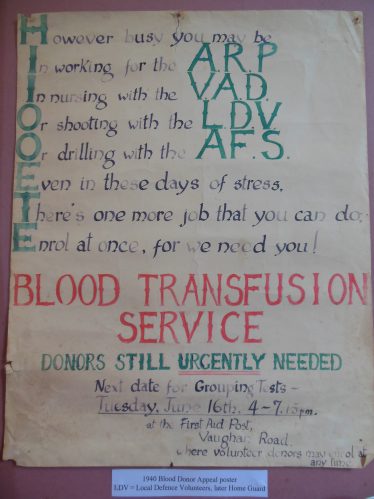 In addition, Red Cross members provided part-time nursing at Oster House and Hill End Hospitals and at The Red House after it opened in 1941, as well as helping at other local wartime hospitals.

The Ambulance Division, run by Mrs Carol West, the Transport Officer, was based at Park Hall – the headquarters of the Air Raid Patrols (ARP). There were four purpose-built ambulances and two converted vans, borrowed each night from Lovibonds (wine-merchants) and Forrest Stores (grocers). Members were rostered and slept at Park Hall for two or three nights a week. They attended casualties but also acted as general transport, delivering blankets and pillows to billets and food to Warden Posts.

There were regular training sessions given to VADs, Civil Defence Workers and the public, and they took part in many fund-raising collections, such as the ‘Penny a Week’, in cinemas and in Town Parades.

As a schoolgirl Joan Salt (nee Chappin) was a Red Cross Messenger from 1940-45. Getting up at 6.30am on three mornings a week she made tea at the First Aid Post in Vaughan Road before taking messages down to the ARP HQ at Park Hall, and then going to school.

Once war ended, the Society adapted to the changing needs of the local community by providing:

In the 1950s and 1960s the Detachment was reconstructed and new active groups were formed:

The 1970s saw a transition to caring in the community. A landmark was the opening of the Day Care Centre in 1976 with James Marshall House care home in Leyton Road alongside. Here the Red Cross had a congenial regular meeting each Thursday evening, and a large walk-in cupboard to store the ever increasing amount of training and First Aid equipment. A team undertook weekly bathing sessions for elderly and disabled people, enhanced by the installation of a hoist in the bathroom in 1982.

In 1948 Harpenden Red Cross agreed to run the Meals on Wheels Service when the WVS were unable to continue. An enthusiastic group of drivers used their own cars to collect the meals from St Albans and delivered about 14 lunches twice a week. As the number of clients gradaully increased and meals were requested for four days a week, there were now 32 volunteers on the rota. 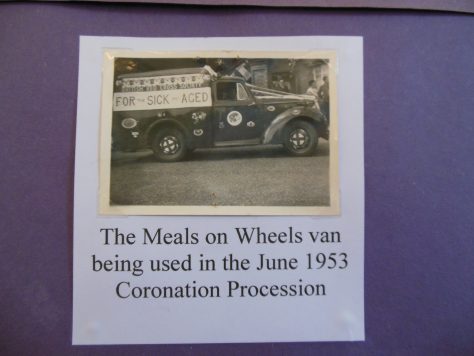 When the Day Centre opened in 1976, the meals were cooked, served up in foil dishes and collected from there for delivery. The dishes were stacked in a Hotlock box for each round – each box having heated charcoal in the drawer beneath. Later, insulated plastic boxes were used.

Demand for the service continued to grow, and was at its greatest in the late 1980s and 1990s, with up to 100 meals being taken round on some days. This sometimes added up to the grand total of over 22,000 being delivered in a year, and needed teams of six to eight members who went out on five days a week for 52 weeks of the year, apart from Christmas and Boxing Days and Bank Holidays.

The elderly and housebound valued not only their meals, but the “dinner ladies” who brought a cheerful face as well, and gave a chance to exchange a few words – perhaps the only person they would speak to on that day.

In March 2009, Hertfordshire Social Services replaced the Red Cross service with one which supplied frozen meals, microwaved just before delivery to the house, for seven days a week. This brought to an end 61 years of continual service and the retirement of 158 volunteers. 115 attended a final party when 42 awards were made to long-serving members. All looked back on the fun, friendship and achievements of this remarkable local voluntary service.

Equipment for home nursing was available from the First Aid Post during WWII. When this closed down in 1945, crutches, bedpans, urinals and a couple of wheelchairs were kept in a tiny Red Cross store cupboard next to the upstairs practical room in the Further Education Centre in Victoria Road.

In the early 1960s the equipment was moved to the home of the Commandant, Miss Latter at 18 Stewart Road, and in the early 1970s to the garage of Joan and Geoff Salt in Stewart Road. The system was somewhat haphazard at times – donations were popped in a jam-jar in Miss Latter’s shed – but a useful service was provided.

In 1975 Mrs Annabel Leaver set up a well-organised Medical Loan depot in Park Hall, in the area now occupied by the kitchen. This well-used service was easily accessible with parking outside. It opened regularly on two mornings, one afternoon and one early evening each week.

With the refurbishment of Park Hall in 1994, it moved to a brand new extension to Park Hall, built where the Pensioners’ Workshop had stood. New shelving, an increased range of stock and good cleansing facilities meant we were able to provide a reliable service. Equipment was lent for as long was needed, but the emphasis was on short-term loans, and there was a steady turnover, particularly of the 50 wheelchairs and 118 commodes on the books.

With the centralisation of this Red Cross service to Harlow in 2007, the depot had to be closed after almost 70 years’ service.

[This room currently houses the archives and some of the artefacts of the Local History Society!]

This service operated from 1947 to 1982. Following initial training at London HQ, this small group met once a week to repair and rebind books for the Hospital Library Service. The damaged books were collected from the nearest county depot. Members then used their skills to repair torn pages and covers, mend broken stitching, replace missing backs and remove stubborn stains. Books were then returned for use again in hospitals. During its 36 years, members mended nearly 4000 books.

With occasional continuing instruction, members became very proficient, and a Harpenden member gained prizes in 1955 and 1956 in national competitions.

In the war and post-war period, 50,000 books on 76 subjects were collected by the British Red Cross and mended, if necessary, by local Library Groups such as the one in Harpenden. The books were then sent out via Switzerland to PoWs who were studying. 10,845 prisoners were enabled to sit exams set by various British universities.

From 1938 onwards we have run training courses. The three month course has always provided the qualification for Red Cross First Aiders, which used to finish with formal questions by a doctor. In the 1980s less formal training was introduced, with a manual illustrated in colour, more practical work and visual aids. In 2003 British Red Cross decided to encourage more of the public and those in the workplace to undergo First Aid training. A range of new courses was introduced, with increased practical experience of dealing with a variety of casualties in simulated scenarios.

Trainers attend residential training during which they gain City and Guilds certificates in teaching and NVQ qualifications in assessing skills. Trainers’ teaching is monitored every two years to maintain standards. Courses are tailored to the needs, ages or interests of a group – including sports clubs, shops, surgery staff, teachers, office staff, social organisations for the Duke of Edinburgh Award as well as for Guides, Scouts, Cubs and Brownies.

Red Cross First Aiders are present at many events. In 2012 Harpenden Red Cross:

The first Junior section was started in 1947 by Mrs H W Belfield and Mrs Winifred Wyborn as part of the adult Detachment because many girls were considering taking up nursing after leaving school: eleven girls passed their nursing exams and were enrolled for training in 1948. This section merged with the first Cadet Unit (3996) in 1948, open to girls and boys, with courses in nursing, First Aid and mothercraft, and remained active until 1969, under the leadership of Joan Salt (nee Chappin) and Elsie Bloxham. A separate boys Unit (6449) was run by Ken Gregory, concentrating on First Aid and stretcher work, between 1963 and 1970. 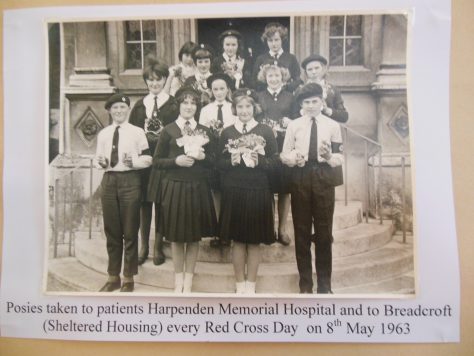 Cadet Unit 5050 ran from 1953 until 1997. In 1982 the Unit was renamed Youth and Juniors within the Harpenden (Youth) Centre, and more courses were added, including accident prevention, campcraft, communications, health eduction, home mechanics and rescue. The Cadets remained busy with projects for home and overseas, such as helping at outings and picnics for handicapped children, including those at Elmfield School, holiday play-groups and serving teas at the Darby and Joan Club and to patients in The Red House. They made up disaster bags and quilts and bandages for a Leper Treatment Centre in Africa. They raised funds for:

Throughout the years volunteers have taken part in Hertfordshire County Civil Defence exercises as well as local practice ‘call outs’. Members of several groups from Harpenden Red Cross have joined with other voluntary organisations for exercises at Luton Airport with airport staff and all the emergency services.

Harpenden members were called to London on 11 September 2001 to help man telephones for a day, taking calls from those in the UK who were seeking news about relatives or friends living or working in New York at the time of the collapse of the Twin Towers.

In the aftermath of the London bombings on 7 July 2005, Harpenden Red Cross members joined 159 volunteers from all over south-east England to help in the Family Assistance Centre which was organised in the Royal Horticultural Society’s Hall in Vincent Square for six weeks following the bombings.

The British Red Cross now has members specially trained to help in a major incident or national emergency when the statutory services and their resources are overstretched. Harpenden has four such Emergency Response volunteers who are trained and kept up to date in:

Two Harpenden members helped man a temporary Local Authority Rest Centre set up to help 280 people who had lost their homes as a result of the Buncefield Oil depot explosion in Hemel Hempstead on Sunday, 11 December 2005.

When Caddington suffered outage of gas and electricty for several days from 20 December 2009, a Harpenden volunteer joined members from Bedfordshire Red Cross to check on the wellbeing of residents in 300 households, and to assist at the Rest Centre in the village where 180 people were given shelter, information and advice. 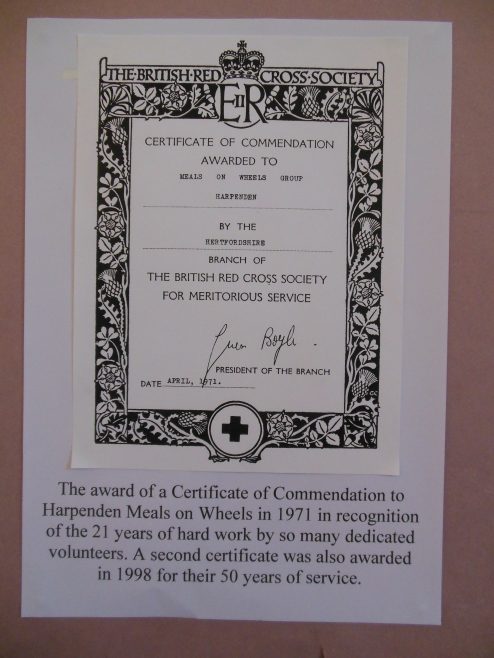 Harpenden Red Cross and individual members have received a range of awards over the years.

*   Marion Donaldson wrote Harpenden Red Cross: 50 years of Service, published in 1988. Copies can be consulted in our archives: BF 9B/3b