George Dyke in his book “John Lawes of Rothamsted: pioneer of Science, Farming and Industry” devoted a chapter to the factories and his early attempts to put his chemical knowledge to profitable use. Lawes made substantial quantities of superphosphate at Rothamsted in 1842, the year in which he was granted a patent.

“Lawes was astute enough to know that speed was the essence of success in business; he cancelled his planned honeymoon on the continent, and instead, took his bride boating on the Thames (in the winter!) seeking a site for his first factory.” He found a suitable site for his first factory on the West bank of Deptford Creek, on the South side of the Thames, a little above Greenwich. 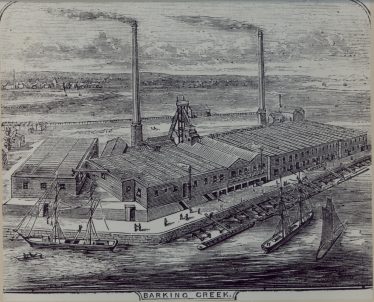 In 1857 Lawes acquired a site for his second, larger, works at Barking Creek, where production started in about 1860 and George’s book includes two pictures of the Barking factory.

We know that Sir John Lawes was a benevolent squire to the people of Harpenden. He was equally caring of the people who worked for him at Barking, and built a hamlet in the 1850s mainly for them, although some of the villagers actually worked on the River Thames, as lightermen and bargemen. The place was known as Creekmouth Village.

There were 50 cottages built in two rows with a ‘backways’ between them. Some older residents remember collecting their water from a well on the green; later a standpipe was fitted. The houses were lit with gas or oil lamps. Nearby were two gunpowder magazines, used to store gunpowder for the Boer and Crimean wars. One of the magazines dated back to the 1700s. The village had its own school, Mission Church, shop and pub and was surrounded by fields and marshes. The only way to get to Barking, two miles away, was along a muddy, often inaccessible track or by boat, rowing with the tide up to the Town Quay and then waiting for the tide to turn so they could row home again.

Parts of the village were frequently flooded when the high tides breached the bank but the most memorable flood was in 1953 when the whole village was under several feet of water. This flood sounded the death knell on the village and by 1957 the village ceased to exist.

In 2004 the Creekmouth Preservation Society was founded, with the aim of ensuring that the village and its people are not forgotten. The Committee meets monthly, holds regular events, and publishes a newsletter, from which these two extracts are taken.

“The pleasure steamer, the Princess Alice, sank off Creeksmouth on 3rd September 1878 with the loss of over 700 lives, when it was in collision with the huge collier The Bywell Castle. Creekmouth villagers were immediately on hand to help with rescue of the survivors and recovery of bodies from the dark, swirling waters of the Thames. A lady who was rescued paid tribute to the gallantry of the villagers of Creek’s Mouth, who spent the whole night in, and on, the water, searching for survivors.”

Details of the Society can be obtained from: http://creekmouth.net/

Though this is no longer visible on the Creekmouth website, permission has been granted by Maria Williams, the current secretary of the Preservation Society, with the comment that: “When the schoolroom closed [John Lawes] was asked, by St Paul’s Mission, in Barking, if they may turn it into a chapel for the villagers. He readily agreed and paid for all the alterations, pews, altar, stained glass window and church bell.” Maria and and her family lived in one of his cottages until 1956 and her dad worked for Lawes Chemicals for many years. 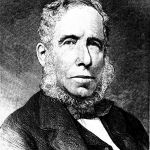 In 1857, John Bennet Lawes, agricultural scientist from Hertfordshire, came to Creeksmouth and found it to be the perfect spot to build his fertiliser and chemical factory. It was remote and had the river frontage to bring in supplies of guano and other raw materials, for the production of his fertilisers. Since the decline of the fishing industry in Barking, taking with it the by-products of fishing, such as sail-making, rope-making, chandlers, slop & smack sellers and the like, employment was in decline in the town. Mr Bennet Lawes’ new factory was a lifesaver for many local families. However, the area was so difficult to get to, especially in the wetter, winter months, the benevolent Mr Bennet Lawes decided it would be fortuitous to build homes for his workers, next to the factory. In total, 50 cottages of varying sizes and styles were constructed. Creekmouth Village was born. As stated earlier, Mr Bennet Lawes was an agricultural scientist and in 1872 he decided to retire and devote his time to scientific agriculture research at his Rothamsted estate. He sold his factory at Creeksmouth to a consortium of businessmen, who continued trading as Lawes Chemical Manure Co. Ltd. In later years the factory ran into financial difficulties and in 1969 was taken over by Seabright Chemicals Ltd.

The village, consisting of 50 houses, was built, tucked under the riverbank, in the mid 1840s -50s by the internationally renowned agriculturist and industrialist, Sir John Bennet Lawes. It was to house, primarily, his workforce at Lawes Factory, manufacturing chemicals and fertilisers, although many of the tenants worked on the river as lightermen and watermen.

The cottages were built in two rows with a muddy ‘backways’ between them. At each end were slightly larger cottages for the factory managers. Nearby were two gunpowder magazines, complete with cottages for the magazine keepers. One was called Magazine Cottage and, for a time, the other was known as Kames Cottage. Both stood in their own bit of ground. It is unknown where the name ‘Kames’ materialised. The first, stone-built magazine was built in the 1700s, followed a century later by the second, brick built magazine.

Despite the village being built, under the direction of, Mr John Bennet Lawes, there appears to be no plans or documents showing the outline of the village. It is interesting that the census of 1841 shows  that six families were living at Creeksmouth but by the 1861 census – following the building of Mr Bennet Lawes’ factory and village, there was 1-6 Factory Cottages, followed by 1-6 Creekmouth Cottages and, finally, the rest of the the cottages are referred to: “Creeks Mouth” with no other numbers. It makes me wonder, as the cottages have 3 distinctive styles, they were actually built at different times, beginning at or around 1850.

A school, a church, a shop, a public house

Three of the cottages, facing the river, were converted into the first Creekmouth School, complete with large hall and two classrooms. This school closed in 1892 when a new School Board was set up in Barking. The children were sent on a two mile, muddy walk to Barking, to attend Westbury School.

The vicar of Barking approached Mr Lawes for permission for the church to take over the use of the now empty building. Mr Lawes readily agreed and the former school was transformed into the Creekmouth Mission Church. Dividing walls were knocked down, alter rails and choir stalls were added, classroom windows replaced with lancet windows and a bell installed. All this work was funded by Messrs Lawes & Co., and, on completion, the Lord Bishop of Colchester held a service of dedication.

The village also had its own shop and a public house, The Crooked Billet, first mentioned in historical records in 1719.

The village was cut off from the rest of Barking by extensive marshland. To get into town the villagers had to trudge two miles via a long, muddy lane. Part of the lane was subject to a toll and many of the villagers preferred to make their journey to Barking, for their supplies, by rowing boat. They would then have to wait for the tide to turn before rowing home again. Those villagers unfortunate enough not to have access to a boat would avoid the toll by walking along the often wet & slippery, narrow riverbank, to town. In dark, wet or foggy nights this exercise would become extremely dangerous.

A letter to the Essex Times, dated January 1870 read: “….allow me to call the attention to the authorities to the filthy state of the footpath to Creek’s Mouth. Often women and children may be seen wending their way to the town, covered in mud, scarcely able to make headway…”.