Remembering the Coronation of 1953

A summary of the talk given by John Seabrook at the Society's meeting on 24 October 2017. 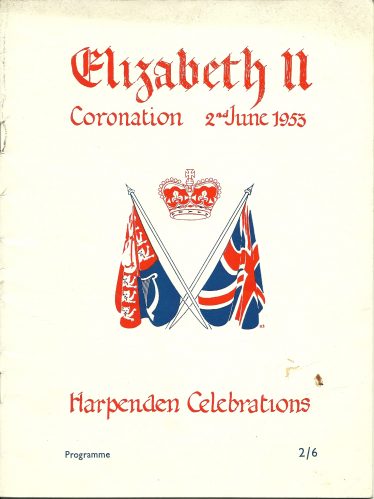 The Coronation of Queen Elizabeth II took place on 2 June 1953 and, of course, Harpenden joined in the national celebrations. John Seabrook was 21 in 1953 and was at that time a reporter for the Harpenden Free Press. He showed the Society some of his own photographs of the festivities.

The theme of the celebrations was ‘Fairyland’, the idea of organiser Sydney Victor ‘Tommy’ Shadbolt, who had successfully planned the Festival of Britain celebrations in Harpenden two years earlier. Tommy and his workers made ‘toadstool seats’ from concrete and dustbin lids, which were scattered around the town and on the Common.

Harpenden Council, headed by Chairman Bert Clark, offered full support including use of the Common, the Public Halls, street decorations and closure of the High Street on the final day. A week of events was planned for Coronation Week. 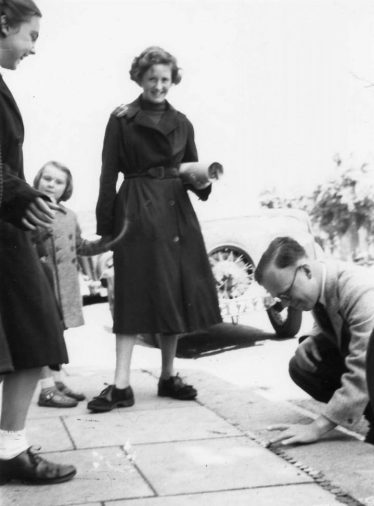 Lining up pennies to make a mile. Putting a penny down is Conrad Ascher and watching is Elizabeth Hossack.

Guides and Scouts collected one mile of pennies on the pavement to help towards the cost of the celebrations. An old penny was 1¼ inches in diameter, which producet £211 4s 0d.

A cricket match took place on Harpenden Common between Ferndale Cricket team – founded by the Home Guard – and Harpenden Cricket Club. Due to rain, the result was a draw, though enthusiasts turned up to watch. 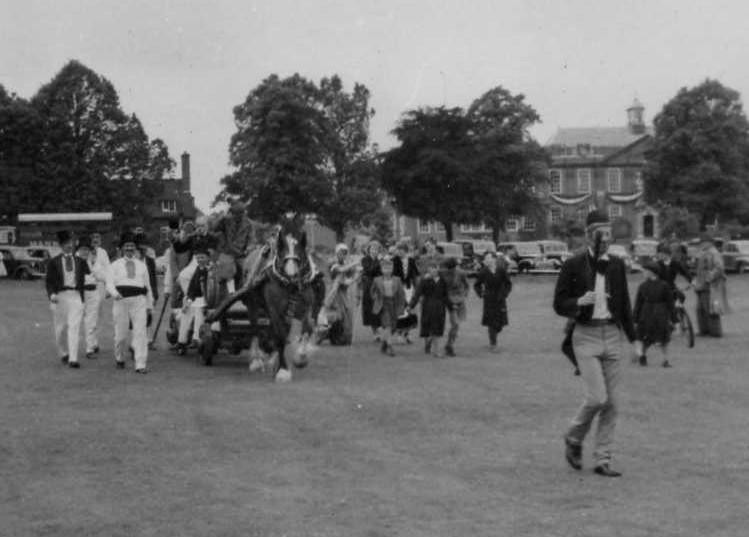 The ‘village constable’ escorts teams and spectators onto the common for a Victorian cricket match.

Coronation Day and the first time such an event had been televised – but few people owned a television. Courtney Davies, the radio and TV shop in Station Road at that time, provided TV sets in the Public Hall for the public to watch.

Outdoor events were brought inside, due to inclement weather.

A Ball was arranged in Harpenden Public Hall, with music played by the Band of the Life Guards. Jill Gott as ‘Fairy Queen’, accompanied by her attendants, was escorted to the Ball by Councillor Maurice Drake and a guard of honour of schoolboys dressed as toy soldiers. A Ball was held the same night at Batford JMI school. 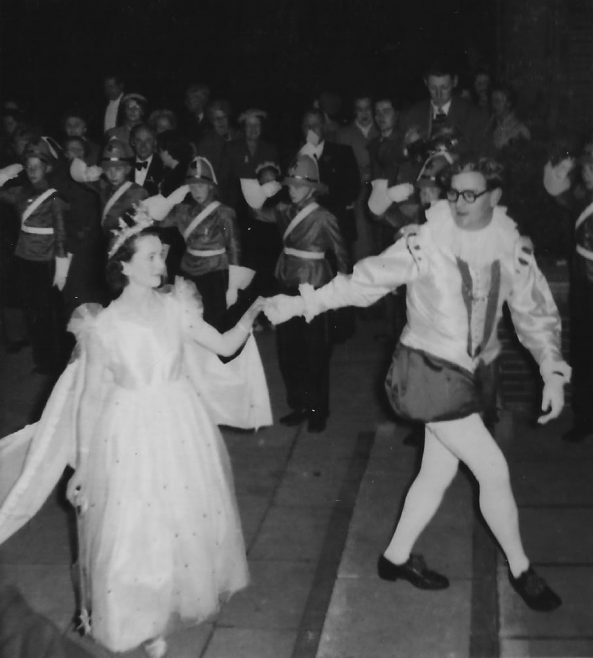 Councillor Maurice Drake escorts the Fairy Queen to the Coronation Ball in the Public Hall, through a guard of honour of ‘toy soldiers’ from Hardenwick School 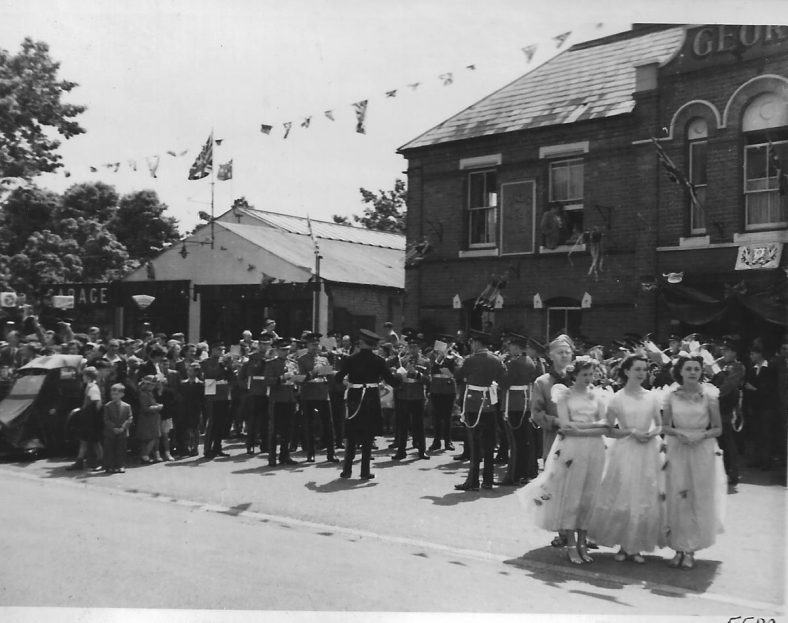 In front of the George – George: Shows the Band of the Life Guards playing outside the George Hotel. In the foreground Sydney (Tommy) Shadbolt, the Organiser with the Fairy Queen, Jill Gott, and her attendants Enid Riches and Yvonne Major.

Harpenden Carnival. The sun shone. In the morning, the Fairy Queen and her attendants led the procession of floats along High Street and round Harpenden, accompanied by the Band of Life Guards, Harpenden Jazz Band, the Rainbow Entertainers, and many carriages. John Seabrook’s pictures showed participants which some in the audience still remembered. In the afternoon, High Street was closed for ‘Games’. The Band of the Life Guards marched onto the Common and was met by the Band of the RAF. There they swapped places and the RAF Band took over. Brocks Fireworks provided a pyrotechnic finale in the evening (Mr. Brock lived in Harpenden then).

The whole Coronation Celebration had a happy, villagey outdoor atmosphere. Those were the days!

Films of Coronation Revels in Redbourn and Harpenden

Redbourn Museum holds silent B&W films of local events made by John Heather. He lived in Harpenden, then later in Lamb Lane, Redbourn. He used to put on irregular film shows in Southdown and Redbourn to an audience mostly of children.

John and Pauline Ridgewell showed three of his short films, made between 1947 and 1953, to Harpenden Local History Society on 24th October 2017.

Film 1: John Heather erecting his ‘cinema’ with the help of boys and no Health and Safety Rules.

Film 2: Harpenden Coronation Carnival, showing the parade round the town with bands and floats. Then the Games: pram racing, barrel rolling (interspersed with film rolled backwards to amuse the youngsters) sack races etc.

Film 3: Revels on Redbourn Common and Fireworks to celebrate the Coronation.
Over the years, Redbourn village people have helped to identify people in the films, chiefly Peter Box (born, lived and worked in Redbourn) and Jeff Webb (milkman who knew most people).

The films have been digitised and visitors to Redbourn Museum may see them on a television screen when the Museum is open: Saturdays and Sundays 2-5pm, February to November.

For more details go to: www.redbournvillage.org.uk/about-redbourn-village/redbourn-museum/