From the Herts Advertiser and St Albans Times, November 27, 1931 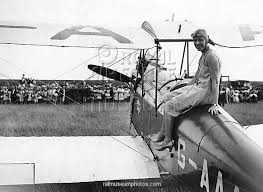 ‘Miss Amy Johnson, whose flight from England to Australia in her aeroplane “Jason” made her famous all over the civilised world, was entertained, at “Inglenook,” Harpenden, by Mr. and Mrs. Edwin Nott on Monday.  Miss Johnson came to Harpenden in connection with a lecture on her flight, at the Luton Assembly Hall, the proceeds of which were to be devoted to the Harpenden Wesleyan Church organ fund.

She arrived by car in the afternoon, and was introduced to a number of Mr. and Mrs. Nott’s friends at tea-time.

Before proceeding to Luton for her lecture, Miss Johnson was the guest of honour at a dinner party, at which there were present, in addition to her host and hostess, the Rev. R. E. Overton (Wesleyan Minister) and Mrs. Overton, the Rev. S. N. Veitch (Rector of Harpenden) and Mrs. Veitch, the Mayor and Mayoress of Luton (Mr. and Mrs. Murry Barford), Mr. and Mrs. Frank Salisbury and Mr F. W. L. Darby.

At Luton Miss Johnson was officially welcomed by the Mayor. Sir Walter Kent presided at the lecture, which was illustrated by lantern slides, and Miss Johnson was afterwards thanked by Mr. Overton and Mr. Owen Green *.

* Owen Green was a son-in-law of Henry Salisbury, a prominent Harpenden Methodist, and brother-in-law of Frank Salisbury.