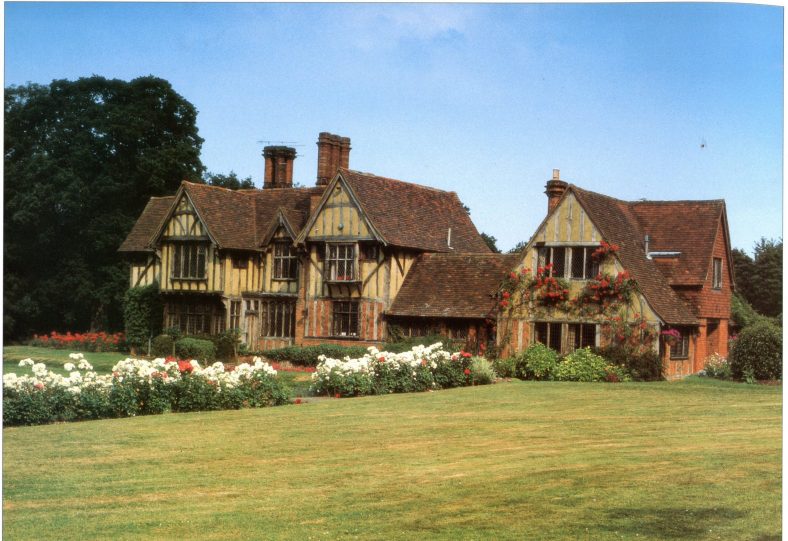 Flowton Priory from the garden – LHS archives, scan from Lane & Fox Sales brochure, undated, prior to the fire? Valued at £695,000

James Bettley was working on a new edition of the Pevsner ‘Architectural Guide to Hertfordshire’ ( published, Spring 2019 see Comment below) when he became interested in the topic of moving buildings while working on ‘Suffolk’ (published in 2015). We are delighted to share his research into this iconic Harpenden building through our website. Further information will be added if it comes to light.

Flowton Priory is a large, timber-framed house in West Common, Harpenden. It is listed Grade II, and is described as ‘an early C16 Priory, moved from Ipswich in 1925, extended and altered in same style, and sold in 1933’.(1)

As its name suggests, the building was moved not from Ipswich but from Flowton, a small village in Suffolk about six miles north-west of Ipswich. It stood to the south of Valley Farm. 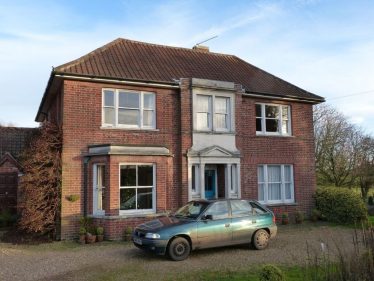 The site is now a field, but in the plot on its south side is a house called The Priory that appears to have been built in the late 1920s or 1930s.(2)

A building that was presumably the old ‘priory’ is shown on the Ordnance Survey 25-inch map of 1904 but is not present on the 1926 map.(3) The building is not named on the 1904 map, nor is it named on the 1839 tithe map. However, the tenant is identified on the tithe apportionment as Davey Vesey (owner, John Lott).(4) The Ipswich Journal recorded in 1823 the marriage of J. Lott of Burstall to Miss Susan Vesey, youngest daughter of Mrs Vesey of Flowton Priory.(5)

It has been said that the building was erected by the Priory of St John of Jerusalem in 1525… as a priory house for that district. After many vicissitudes, it was used as the Rectory for Flowton Church, then as a farmhouse and latterly as a Granary. During the sixteenth century the building was provided with a moat, which is still in existence.(6)

None of this can be verified, but Dugdale’s Monasticon Anglicanum lists ‘Flotton’ among the possessions of St John’s Priory, Colchester, in 1543–4, and a document in the National Archives relating to the collection of tithes during the reign of King James I shows that the Priory owned property in Flowton, which may well have included this building and the surrounding land.(7) There is no record of an actual priory at Flowton,(8) but in the late 18th and early 19th centuries, during the Romantic phase of the Gothic Revival, there was a fashion for naming houses after priories and abbeys, and it was probably at this time that the house came to be called ‘Flowton Priory’.

From Suffolk to Harpenden

Drawings by the architect J. A. Sherman, held in the Suffolk Record Office, Ipswich, throw light on the process by which the building came to be moved to Harpenden.(9) The earliest drawing is dated November 1923, which is probably when the building was dismantled. It is described as ‘Proposed Half-Timbered House at Totteridge, Hertfordshire, for W. J. Pavyer Esq’, from which it would appear that the original intention was to re-erect it in Totteridge (then still in Herts). 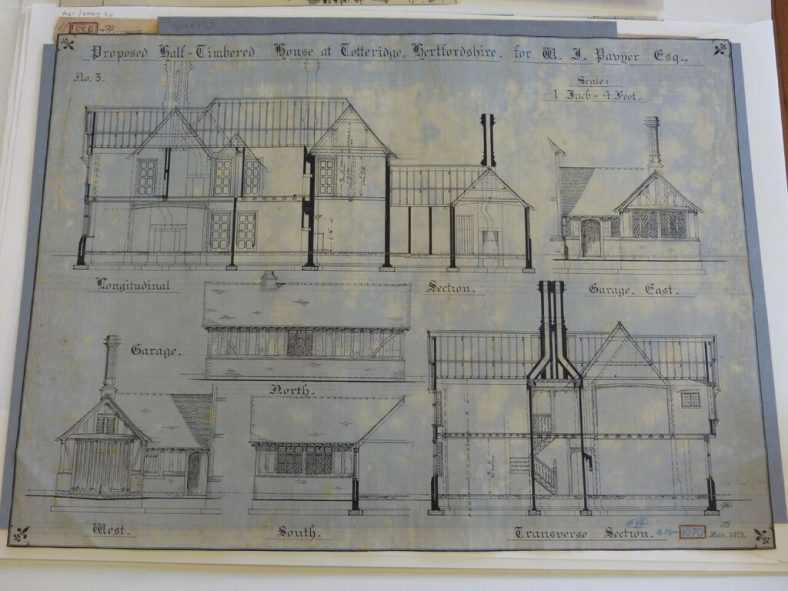 J A Sherman’s project for a timber-frame house for Totteridge – Reproduced by kind permission of the owner of the J A Sherman collection held by Suffolk Record Office, Ipswich branch – SRO(I) HD2449/172

W J Pavyer was a member of the St Albans and Hertfordshire Architectural and Archaeological Society, listed in 1912 as living at Linford, York Road, St Albans,(10) and is presumably the same W. J. Pavyer who formed a collection of medieval and later pottery now in the Fitzwilliam Museum, Cambridge, and who sold some pictures at Sotheby’s in 1931. He is probably William Pavyer who in 1907 was a member of British Numismatic Society living at Aberfeldy, Granville Road, St Albans.(10).  W. J. Pavyer is named as the client throughout (the last of the eleven drawings is dated 1930). He would therefore appear to have been something of a connoisseur and collector, with antiquarian interests. 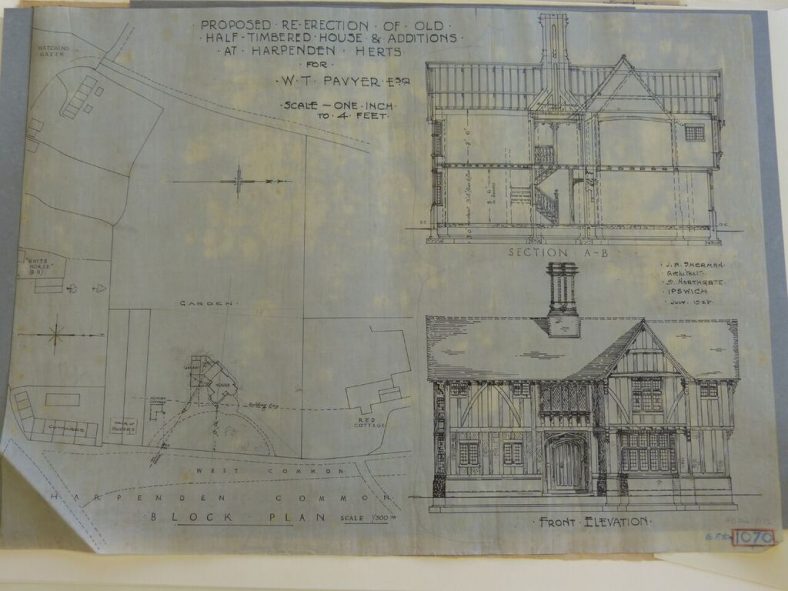 J A Sherman’s project for a timber-frame house for Harpenden, with site plan – Reproduced by kind permission of the owner of the J A Sherman collection held by Suffolk Record Office, Ipswich branch – SRO(I) HD2449/172

John Albert Sherman (1876-1966) was an Ipswich architect (of German parentage, born Scheuermann). He was a talented architect, capable of designing in a variety of styles, but he is particularly associated with Suffolk timber-framed buildings, whether restoring old ones, designing new ones in the style of old ones, or re-erecting old ones in other places. Perhaps the most famous example of a building he moved is the so-called Moot Hall on the seafront at Clacton, Essex, moved in 1911 from Hawstead, Suffolk. 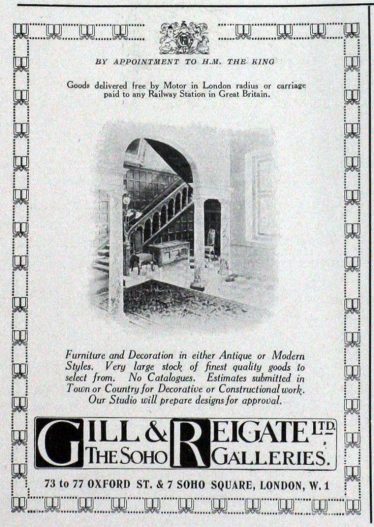 Much of this work was done in association with Gill & Reigate, a London firm of antique dealers who specialised in period fittings including complete rooms and whole houses. In 1908 they exhibited at the Franco-British Exhibition at the White City, London, a timber-framed house from Ipswich. Sherman worked with them to dismantle and re-erect that building, and after the exhibition it was sold and added to the Manor House, Ashby St Ledgers, Northants.(11) J A Sherman’s proposal for a variation (addition) to the house at Harpenden – Reproduced by kind permission of the owner of the J A Sherman collection held by Suffolk Record Office, Ipswich branch – SRO(I) HD2449/172

Gill & Reigate’s name appears on some of the Sherman drawings, dated 1925 and 1928. By 1928, the location of the proposed new house is given as Harpenden, and a block plan, July 1928, shows the house in its present location. A drawing of March 1929 shows a ‘proposed variation’, that is, a small two-storey addition at the north-west end (kitchen and scullery on ground floor, bedroom and bathroom on first floor). Beyond that a single-storey outbuilding (larder, coals, heating chamber, w.c.) is shown on a drawing of November 1929. The last drawing, dated April 1930, gives the complete plan of both floors in what was presumably their final state. 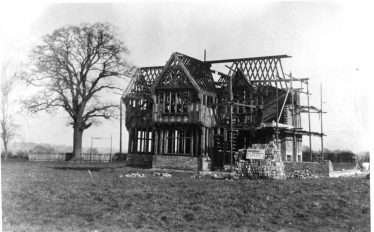 It would therefore appear that the building was dismantled in 1923 and re-erected in 1928–30. This would accord with the account given in the St Albans Times, that ‘a few years elapsed’ after the building was taken down, while a suitable site was located. The same account names the contractor responsible for the rebuilding as J. Dennis of St Albans. 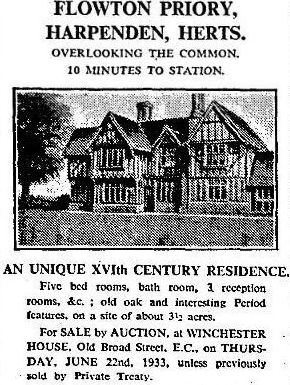 The house was sold, presumably by Pavyer, in 1933.(12) It is said that at that time the house was not quite finished, and the new owner, Colonel Johnson, completed the work to Sherman’s design, and also extended it using materials from an old barn.(13)

For the full auction brochure, see the gallery below. 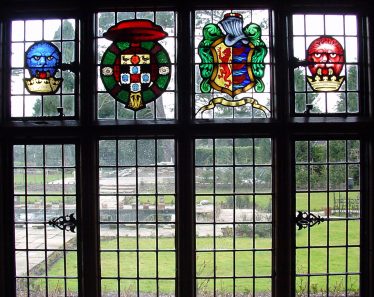 Some of the windows contain stained glass, although it is doubtful whether any of the older pieces were made for the house; it is more likely that they were inserted as part of the re-erection, or later. Some appear to be contemporaneous with the original building, while one has the monogram of Thomas Willement, a well-known maker active between 1812 and 1865.

Other pieces were lost in the fire which damaged the house in 1999; replacements and additional glass were made by Jude Tarrant* of Sunrise Stained Glass.(14) 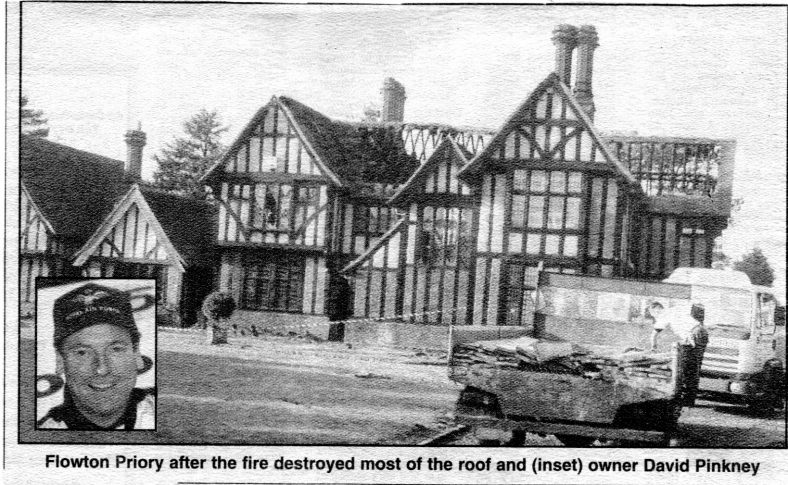 Newscutting after fire damaged the roof in 1999 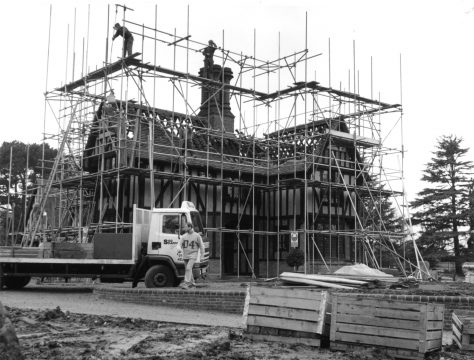 * Jude Tarrant reported to James Bettley (23 January 2017) that “one of the multi-panel windows which includes two upper left hand side panels by Thomas Willement (blue lion & heraldic), and two on the right hand side by our studio Sunrise Stained Glass (red lion & heraldic). Our heraldic shield to the right is an interpretation in glass of a stone fireplace elsewhere in the building. We supplied 18 windows in total. Link here: http://www.artiststainedglass.co.uk/heraldic.html

“There were also some small diamond panes in traced line and silver stain in a hallway window that were much older, probably 16th century, and were presumably of the original building before it was moved. We copied from a photo a small roundel of a lady that would also have been contemporaneous with the original building (the original was lost in the fire).” 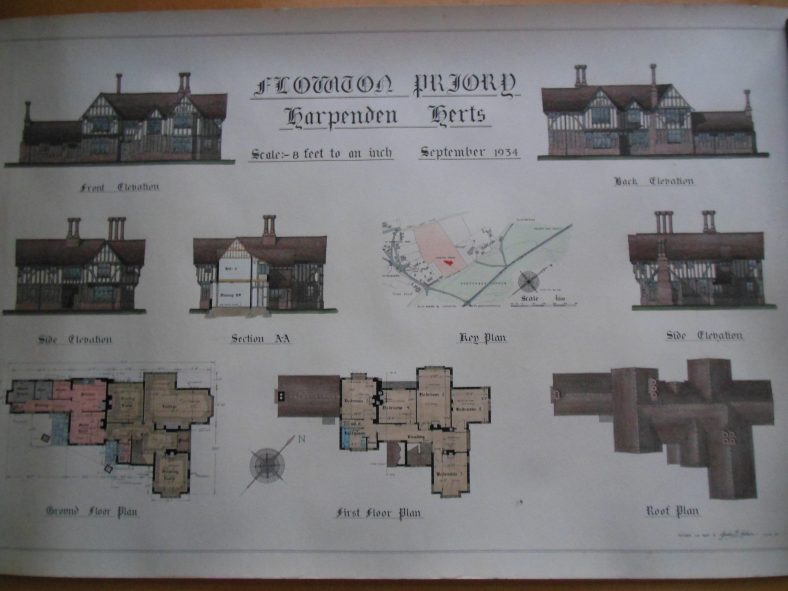 ** In 2016 the Harpenden & District Local History archives received, as part of the Amy Coburn collection, a set of drawings of Flowton Priory made by Gordon E Coburn in 1934. At that time training as an architect, Gordon was a grandson of George Coburn of G Coburn & Sons, builders. He became a member of the RIBA, received an MBE in 1941 and died in Malawi in 1988, having worked in Africa for some years. Photographs of the drawings are shown in the gallery below. 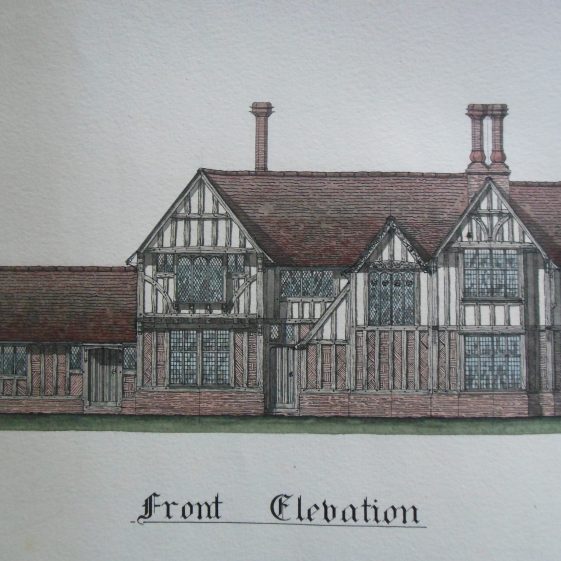 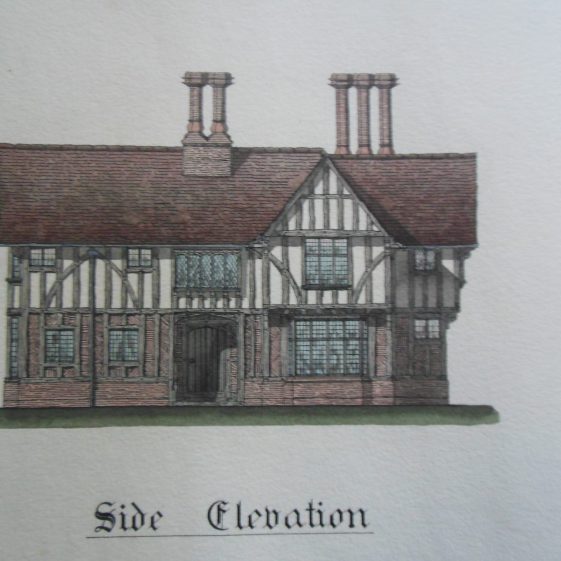 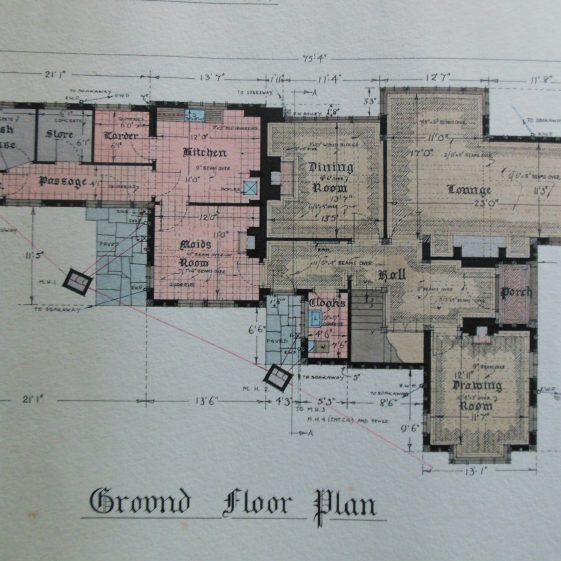 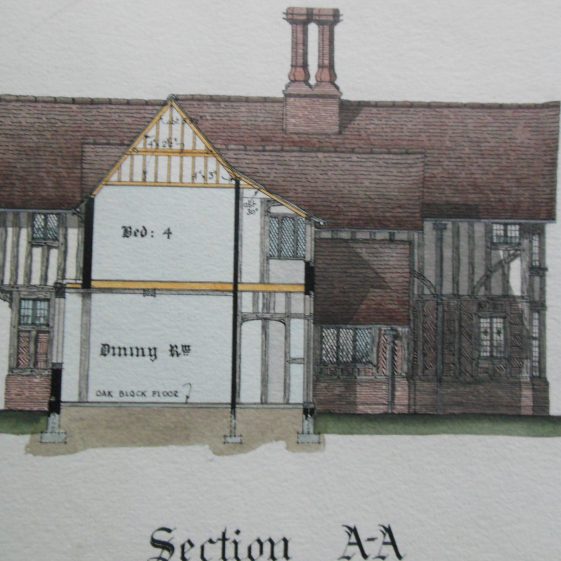 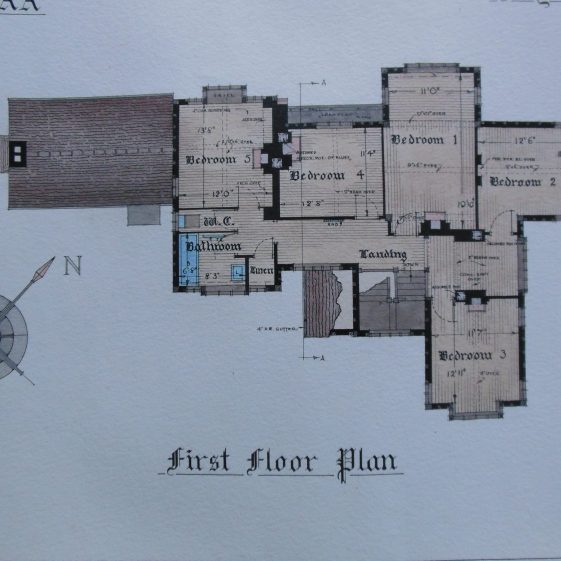 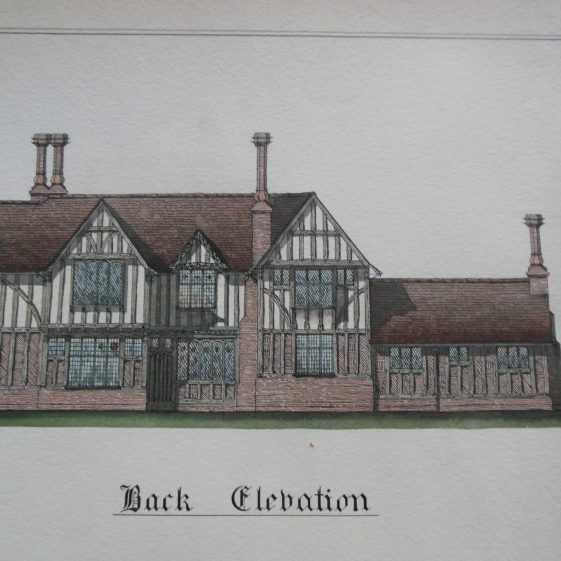 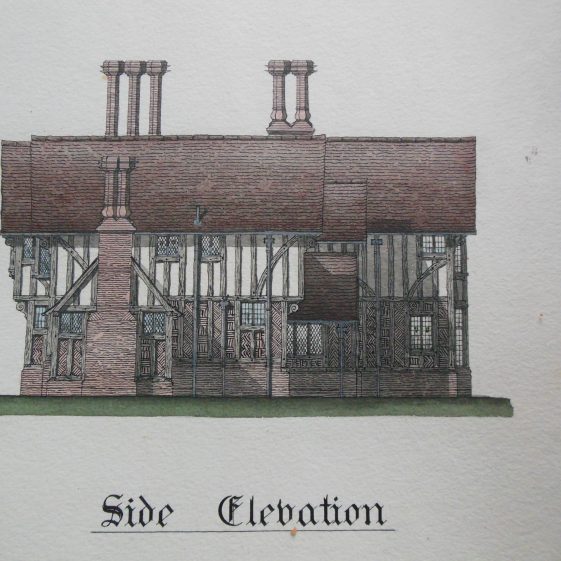 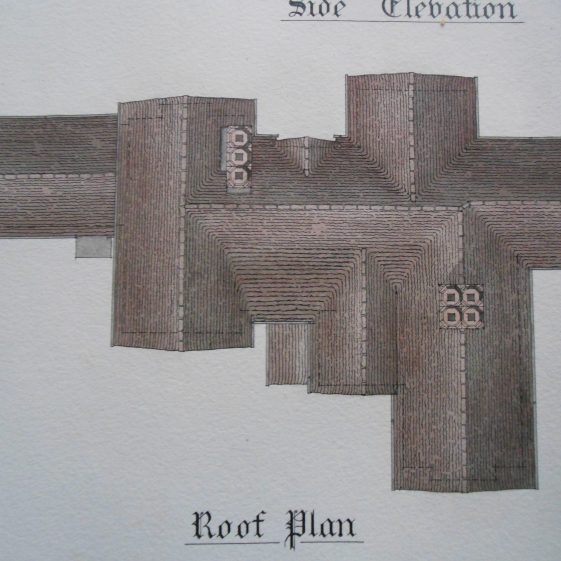 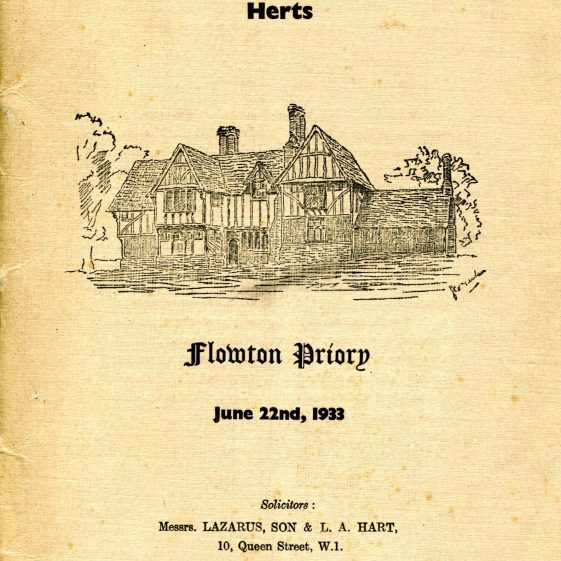 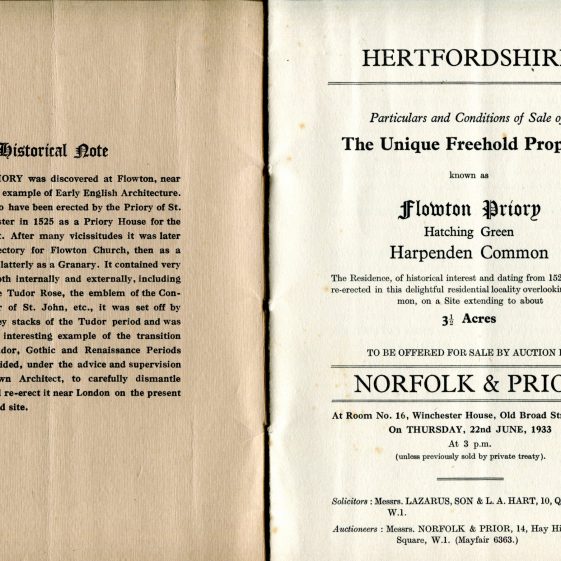 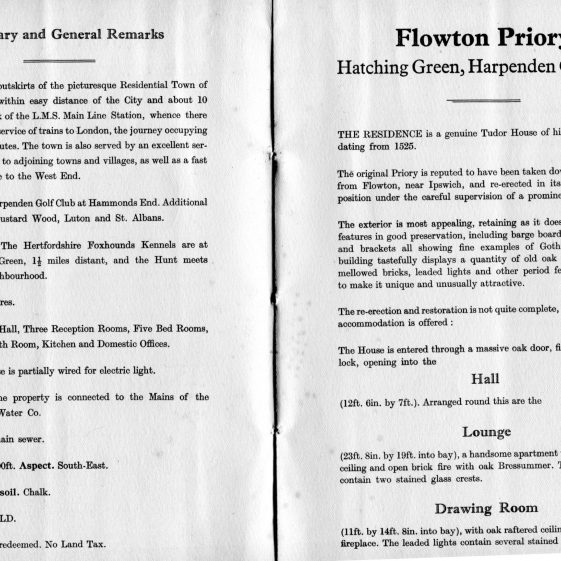 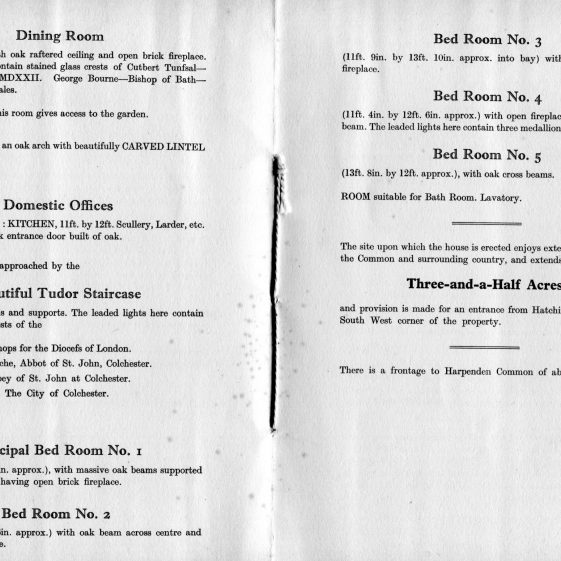