from Station Road to Leyton Road

My father, Bill Gaskin, was born in November 1897 in the parish of Hackford, Norfolk, part of the conjoining of three parishes the most well know being Reepham. As a boy Dad worked as a lather boy for the village barber named Swoish. His (Swoish’s) business was bought by Arthur Fowle (also born in north Norfolk) and Dad worked for some time for him before going to a busier hairdressers in Norwich. 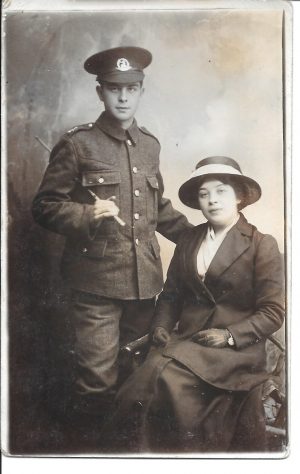 He had not been there long when WW1 broke out and Dad soon joined the Norfolk regiment, serving in Egypt and Palestine.

Arthur Fowle married a lady who was a school teacher and some time either during WW1 or just after they moved to Harpenden where Mrs Fowle took up a teaching post in the Victoria Road school and was one of my teachers during my time there.

Arthur established a hairdressing business at 24 Station Road in 1919, and later sold the business to Bill Young, who also carried out a ladies hairdressing service.

When Dad moved to Harpenden after WWI he lived for a few days with Arthur and Mrs Fowle in Tennyson Road, subsequently moving to more permanent lodging in Cowper Road where he met my Mum who, at that time, lived with her parents at Rosa Cottage in Cowper Road. 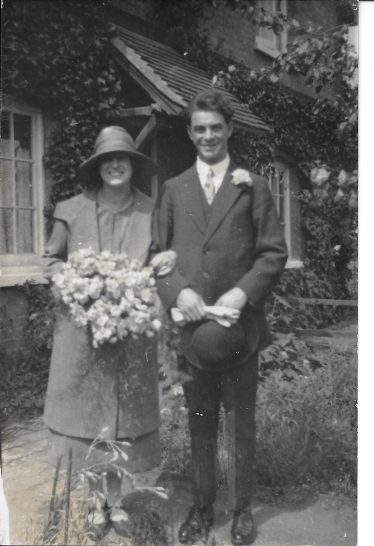 They married at St Michael’s church in St Albans on 13 July 1925 living with the Sibley family in Childwickbury before moving to Luton where Mum ran a confectionery and tobacconists shop until I came along and we moved to 82 Luton Road where Dad lived until his death in 1991.

In 1929 Arthur Fowle took up a job as a commercial traveller for the hairdressing business. The Fowles moved to a bungalow in Park Mount and after having suffered a severe leg injury in a car accident Arthur set up a small business at home providing a mail order facility for the sharpening of scissors and razors to the trade. His two daughters married: Monica to a Ron Plant, moving away from Harpenden  and “Madge” to a gentleman named Watson and they lived in a house on the corner of Clarence Road and Luton Road.

Setting up on his own

The first shop Dad had, in 1931 or 1932, was in Vaughan Road, in front of Vaughan Hall, the entrance to which was alongside Dad’s shop. When I was at the Victoria Road school in the 1930s we initially went to Vaughan Hall for PE lessons and subsequently to Leyton Hall on Leyton Green which eventually became an electrical workshop. Vaughan Hall was opposite Billy Marsh’s stables on the north side of the road, and after it was demolished Edgar Salisbury built a showroom and workshop for Kingston House Mowers – an offshoot of Kingston House at 6 High Street, where larger items could be displayed.

Just after opening his first shop, Dad was joined by Len Hobbs with whom he had worked at the Station Road Hairdressing business. When the old brewery site in the Lower High Street was being cleared, involving the demolition of Vaughan Hall mentioned above, Dad had to move his business to the re-development of three shops in Leyton Road just south of Leyton Green. See Footnote below

The original lease for 11a Leyton Road was dated 20th November 1934, the lessor being Cecil Gilbert Pearse, Dental Surgeon, of “Old Penn”, London Road, St Albans. The profession of the lessor stirred a memory of an occasion when I asked Dad who the previous occupants of the Leyton Road shop had been and his reply was “a dentist” [see Footnote]. The original lease ran for a term of 21 years and I have a draft of what was obviously to be a follow-up lease of seven years to run from 29th September 1955 for a term of 7 years. The lessor in this draft was Cecil Alastair Pearse of Flamstead House, Flamstead, no trade or profession stated. I haven’t been able to find a signed lease running from 1955 but, as Dad was still operating the business in 1964 before selling to Dennis Abrams, I can only assume that the draft was subsequently altered for a longer term. 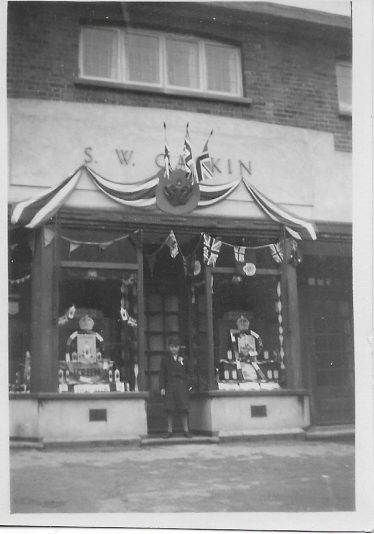 Gaskin’s shop decorated for the Silver Jubilee in 1935, with Colin in the doorway. Credit: Colin Gaskin family archives

I have a photograph of Dad’s shop in Leyton Road when it was decorated for the Silver Jubilee of King George V and Queen Mary: I am standing in the doorway. It was the middle of three shops.

Dad and Len only ever did men’s hairdressing. Before WWII started to make inroads into the staff of his business, in addition to Len he employed two others: F J (Jim) Boughen (June’s father) and Bill Austwick, a native of Yorkshire but who lived in Dunstable from about 1937 onwards. Jim Boughen served in the Royal Artillery in India during the latter stages of WWII but Bill Austwick, being somewhat younger than the other assistants, was called up early in 1940 and served in the Reconnaissance Corps.

To the south of Dad’s shop was a ladies saloon named then as “Ella Cherry”. During the late 1940s and early 1950s the late Joan Carter (nee Pearce) and at least one of the Burgess girls from Marquis Lane worked there. [By 1949 the ladies’ hairdressers were known as ‘Charm’]. The shop to the north was occupied by Basil Harborough, who lived in Redbourn, where he ran a gent’s outfitters business until the early 1960s.

In 1964 Dad started to suffer from high blood pressure and sold his business to the late Dennis Abrams. He continued to work there part time until finally retiring around 1974. Dennis Abrams always kept the name of S W Gaskin over the shop and it was not until he in turn retired and sold the business that it became “Snips” in 1974.

The three shops in the small parade were all renovated at the same time, if it is important I could probably unearth an exact date when the occupiers moved in. Whilst the renovations were going on we took a look around the site. When the doorway to Basil’s shop had been excavated, a mosaic reading “Victoria” was revealed – a reminder that there had once been the first cinema in Harpenden on that site, with its entrance fronting Leyton Road.

The storey above the shops was in two parts comprising a flat where until 1937 or 1938 a lady named Isa Langdon lived and also a branch of the Christian Science church.

Tracing the development of shops along Leyton Road, between Yew Tree Farm (one of the last working farms in central Harpenden) and Leyton Green has been intriguing. 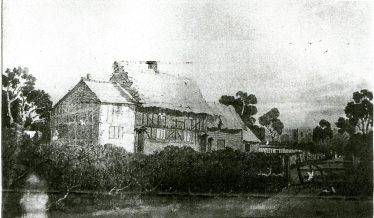 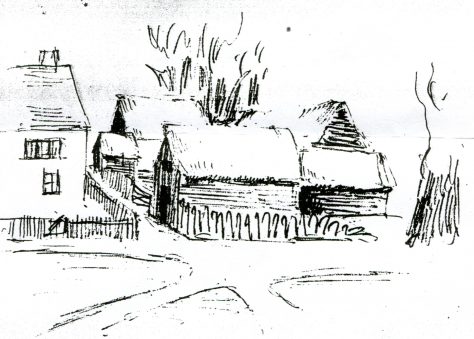 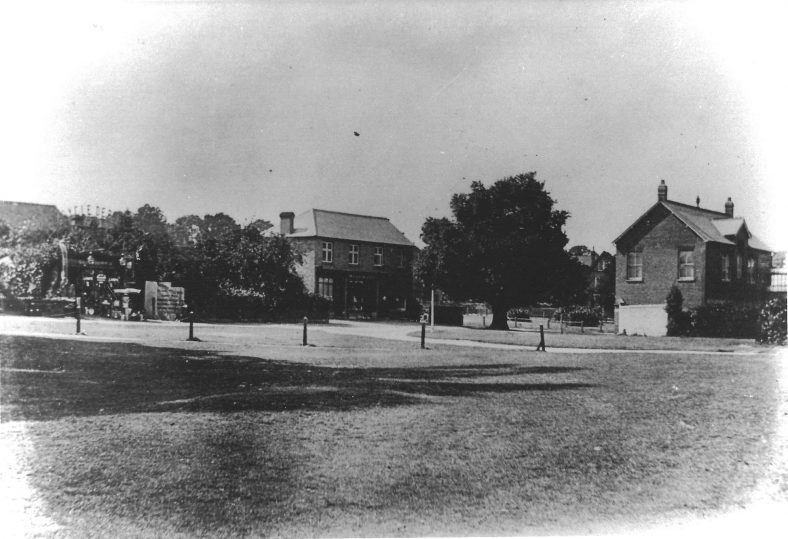 The 1901 Kelly’s directory lists Henry Willmott as the farmer at Yew Tree house, and Robert George Willmott (butcher) and Edward S Willmott (corn and seed merchant) in shops which had replaced the barns. By 1907, Mrs Willmott, farmer, was at Yew Tree house, and the shops were in the same hands, but by 1911 only Edward Willmott was still trading as corn and seed merchant, with Cecil Gilbert Pearse, dentist, at Penn Lodge. 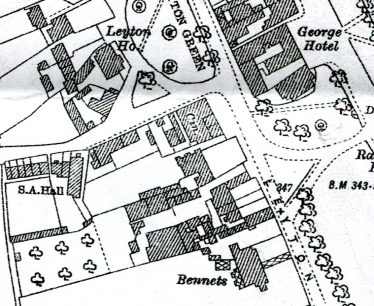 Extract from 1924 OS map, showing shop premises abutting the cinema – which they still do. Credit: Scan from copy loaned by Geoff Woodward 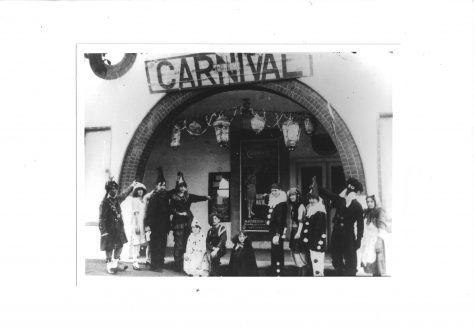 Entrance to the foyer of the White Palace cinema from Leyton Road, 1920s. Credit: LHS archives – from photo donated by Winnie Read

The 1913-14 directory shows the arrival of the White Palace cinema at the corner of Leyton Green and Leyton Road, with a fishmonger (Lawrence) and Edward Willmott still trading. Cecil Gilbert Pearse, LDS eng, DDS Univ. Penn. USA, dental surgeon is at Penn Lodge (giving an explanation for the name). As the 1924 map shows, the shops flanked the side wall of the cinema, and so they remained with C G Pearse joined by Arthur Helmuth Miller in the dental practice by 1922, where they stayed until the early 1930s. No one is listed in any of the units in 1934, by which time the cinema, known as the Victoria Theatre, had closed.

It would appear that C G Pearse bought the shops from the Willmott family at some stage, since he owned the lease signed by Bill Gaskin in 1934.

Looking at the first floor windows on the photo of the Willmott shops, it does seem possible that the redevelopment in 1934 did not involve the demolition, but rather a refurbishment of these shops, retaining their cellars. The former foyer of the cinema was rebuilt at 9 Leyton Road, joined to the earlier building: a slight change in roof line might support this.

From 1935 Mrs Ridley occupied 13 Leyton Road; then Miss Lewis was there by the 1941-2 Kelly’s directory until Mr Jack, dentist set up practice in 1960. It is unclear whether no.13 refers to the accommodation above the shops, which may also be where Penn Lodge was. However, a sign for entry to the surgery remains on the end wall at the southern end. Nor is it clear from Kelly’s where the access to the Christian Science reading room at 11b in 1935 might have been.

Hairdressing remains established at 11 Leyton Road, but there have been many changes at no.9 since Basil Harborough retired in the early 1960s – Harpenden Antique Galleries in 1964, Yates Antiques in 1966 and the White Rose florists for some years after 1968. However the upper floors have been a dental practice at least since the 1990s, with entrances from Leyton Road on either side of Snip’s gents. By 2003 the reception for the Herts Dental Surgery was moved to the corner of no.9. 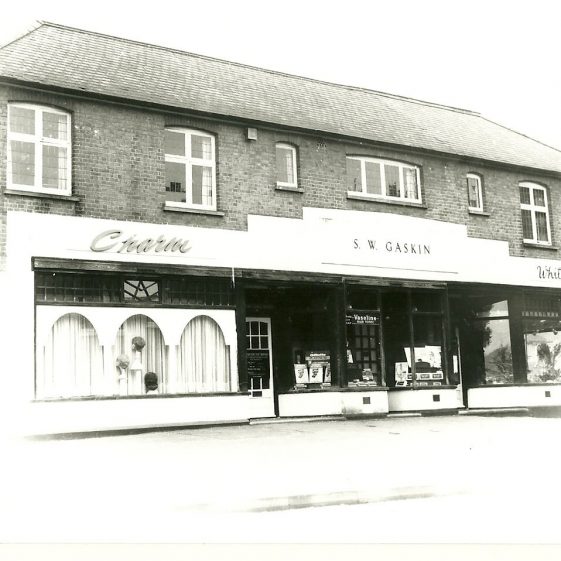 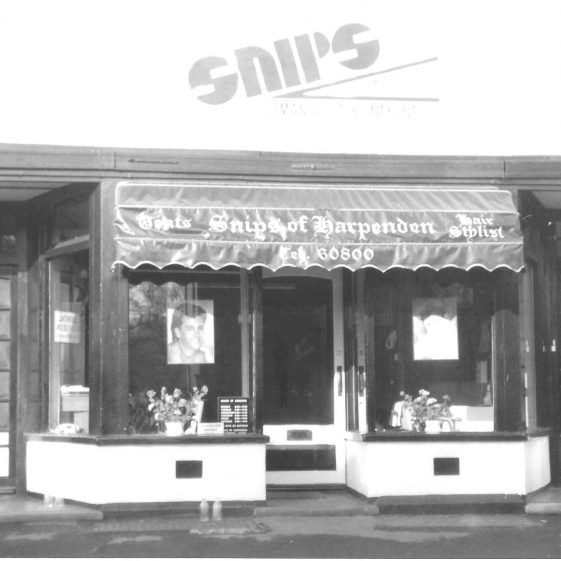 Snips gents hairdressers, with entrances to the dental surgery above - 1994
LHS archives 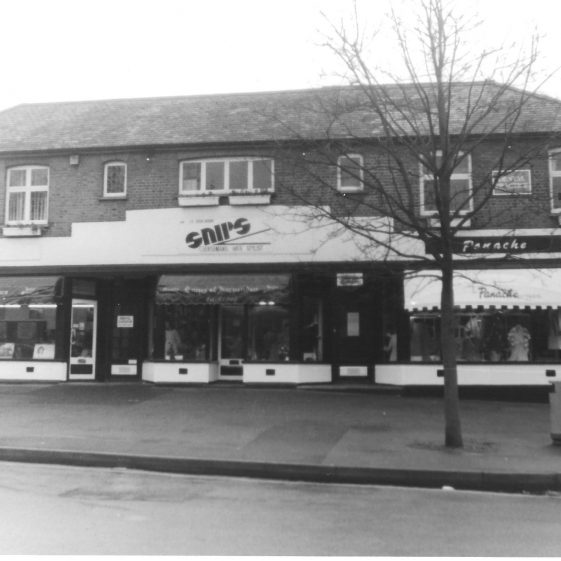 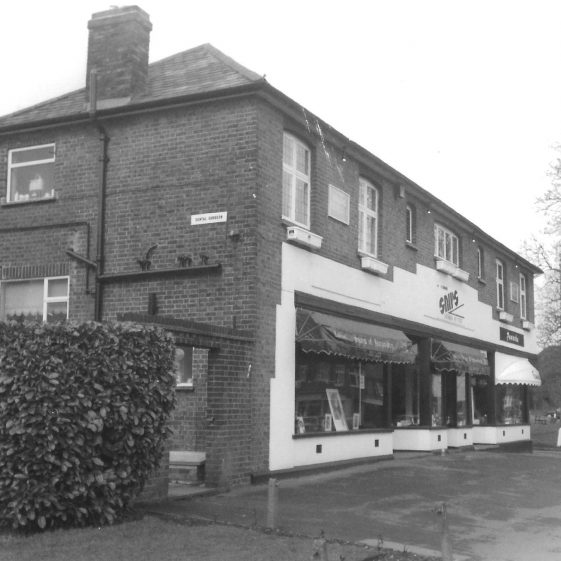 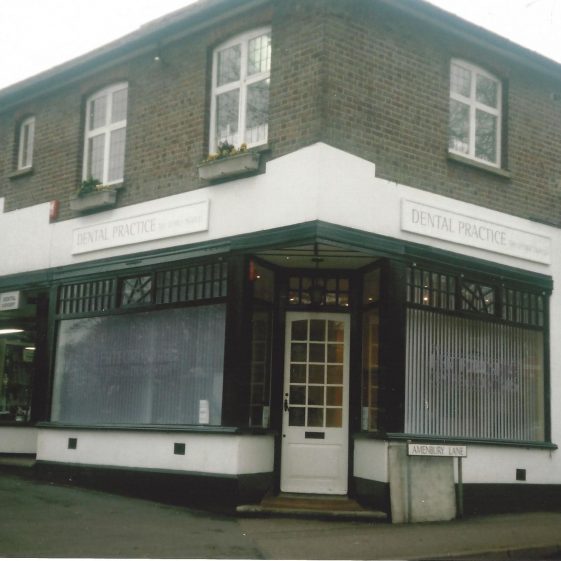 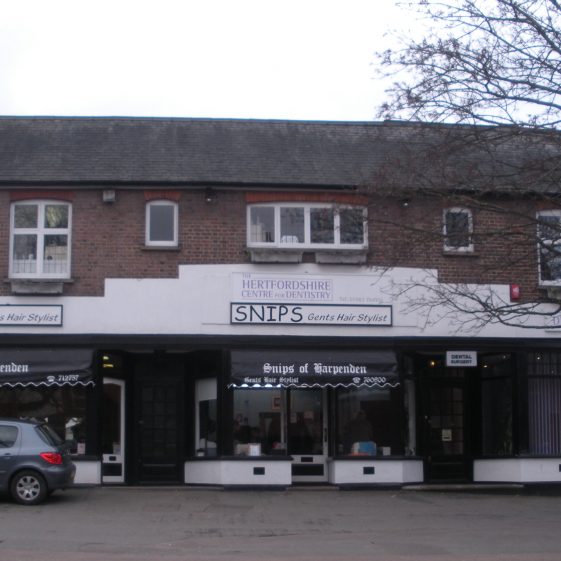 By Colin Gaskin, with footnote by Rosemary Ross