You are here: HomenextHarpenden HistorynextTopics - from Archaeology to WartimenextBusinesses, trades, employmentnextBusinessesnextJohn Willis and the businesses set up by his sons

John Willis and the businesses set up by his sons

Mention of the five Willis brothers in business at Batford Mill in the 1930s and 1940s prompted a query from Anthony Willis about the names of the brothers. Anthony Willis had visited his grandparents at the Mill before emigrating to Australia. It is not clear that all five brothers were involved with the manure manufacturing business – see our page on John Willis and his family – and more particularly who was in charge of the family business in the late 1940s.

Their father, John James Willis, was born c 1842 [probably in Woburn in Buckinghamshire] but he was privately educated in Wheathampstead, where his mother Eliza had family links – she came from Sandridge, and seems to have returned there following the death of husband, Samuel Willis in 1844. 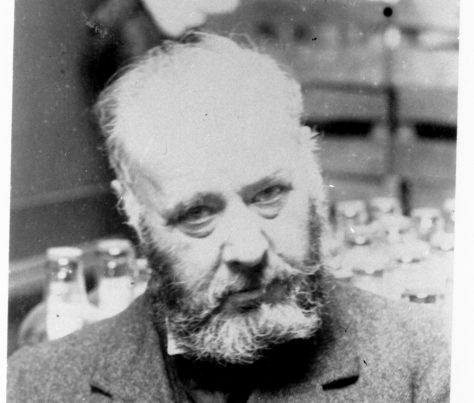 John was good at drawing and diagrams which may have led to him being employed as a botanist and general assistant from 1862 to 1905 at the Laboratory, Rothamsted. He was, both by longevity and action, a trusted employee in Lawes & Gilbert’s time and was in charge of the botanical sampling of Park Grass – one of the Classical experiments started in 1856. He published research findings, such as this reference in the Transactions of the Watford Natural History Society, vol 1, 1877-79: JJ Willis: Notes on the botany of the experimental grass plots at Rothamsted. His interest in botany was reflected in his involvement with setting up Harpenden Horticultural Society, of which he was secretary for many years, organising the annual flower shows.

By the time of the 1871 census John James Willis was was living on the High Street near Leyton Green where Henry Gifkins, Registrar of Births, Deaths and Marriages, and head of the office staff at Rothamsted lived. It would seem that this connection led to him being employed as an enumerator for the censuses in 1871 and 1881. Then aged 28, John Willis was listed as ‘record clerk in laboratory’. He had married Harpenden-born Jane Archer on 23 September 1867. By the 1871 census they had two very young children, Samuel (13 months) and Kate (2 months). It seems that by this time they were already sharing premises with the Reading Room, the forerunner of the Lecture Institute and Reading Room, built in 1886 by Henry Tylston Hodgson on his land near his home, Welcombe on Wheathampstead (now Southdown) Road. This became the Friends Meeting House in 1933.

John was a founder member and secretary of the Institute. He was also an active worker in parish affairs, and took a special interest in the Temperance Society, and, as noted above, became secretary of the Horticultural Society in 1903, shortly before his retirement from the Rothamsted Laboratory. 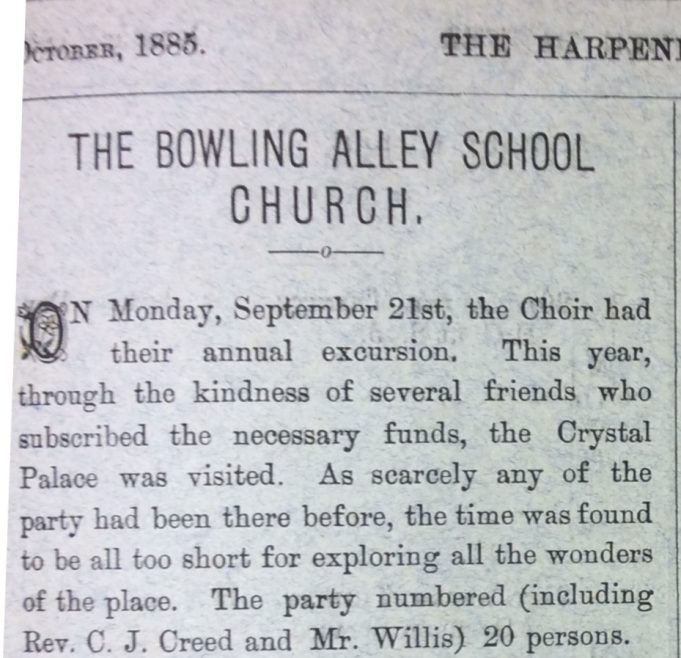 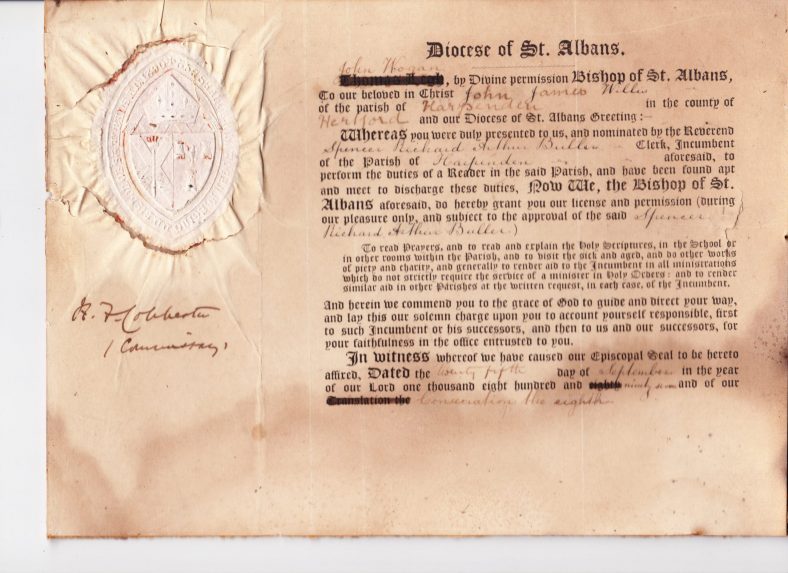 The census of 1881 records John James as living with his wife Jane at the Reading Rooms, then near the corner of Leyton Green and the High Street. At this time they had five children (Kate aged 10, Frederick A aged 9, Edgar T aged 6, Gertrude aged 4 and Frank aged 2 – their eldest son Sam had died, aged 5, in 1874).

By the 1891 census, Frederick Archer Willis aged 18 was an under-gardener at the Garden House, West Hyde and Edgar aged 15 was a grocer’s assistant in Hammersmith – both gaining experience which they would later use in their own business. Two further sons, George (born c 1883) and Leonard (born c.1886) were living with their parents at Hecla Villa, newly built for them in the mid 1880s in Carlton Road – possibly no.5, though it is difficult to be certain, due to demolition of some houses in the 1960s. According to Kelly’s Directories their nearest neighbour was Mr Wix, headmaster of St George’s School – and later Vaughan Stephens and then Halley Stewart at the Red House when that was built in 1892 . 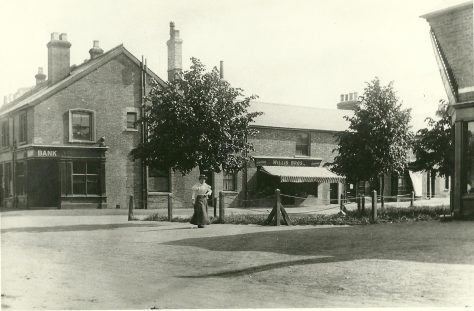 By the time of the 1901 census only Leonard was still at home with his parents in Carlton Road. Frederick and Edgar had set up business in fruit growing and the manufacture of manure – presumably with know-how from research at Rothamsted – on land at the south-west side at the western end of Amenbury Lane. Their produce was sold at the family shop on Leyton Green, initially next to Marten Part Bank (later Barclays) from 1899 to 1923 and then in the adjacent shop (Friends hairdressers in 2019), when Barclays Bank expanded in 1923. 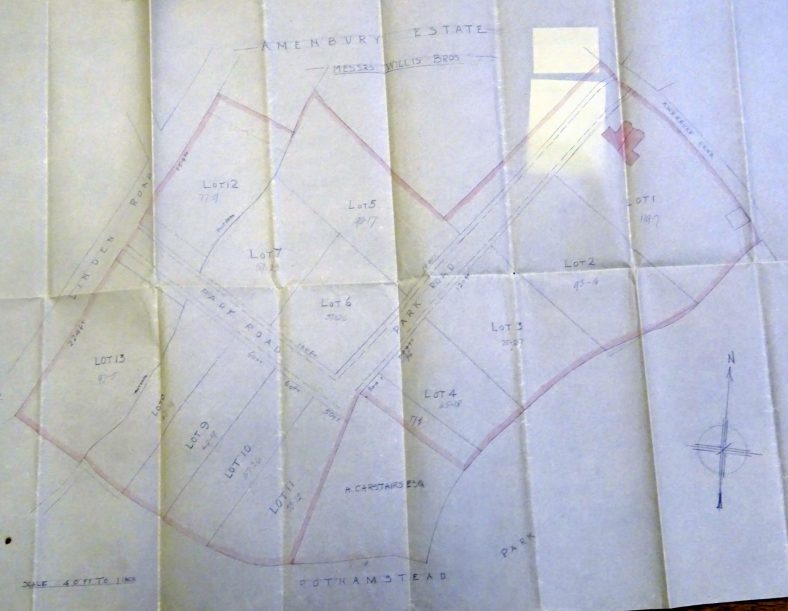 The partnership for the nursery was not smooth-running: a deed of partnership was drawn up in 1903, but dissolved in 1905. This appears to be when the ‘Amenbury Estate’ was advertised for sale of building plots by auction, including Ecclesbourne Villas (which the brothers had built in c.1900). However there is no evidence that plots were sold or more houses built at that time. The brothers were in dispute with Henry Steers, developer of the St Nicholas Estate, over access – and the plan for the sale of the Amenbury Estate includes a ‘Park Road’ off Amenbury Lane, with plots marked out. These were not developed according to this plan.

Edgar snr was in residence and company secretary in Amenbury Lane in 1911, having been listed in Kelly’s Commercial section since 1906, as Horticultural Sundriesman and manure manufacturer – which continued there until 1927/8. 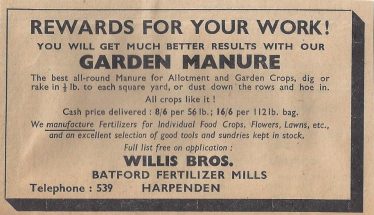 A new opportunity arose when George Titmuss retired as Miller at Batford Mill in 1927/8, and brother Leonard Willis moved into Batford Mill. The Willis brothers moved manure manufacture to the mill where they were listed until 1949.

The company came to an abrupt end in 1950, following a court case in 1948/9 when the Willis Brothers (Harpenden) of Batford Mills, Batford were sued by R Ives, a nurseryman from Biggleswade, for compensation for having been supplied with fertiliser contaminated with sodium chlorate weedkiller. The court found in favour of Mr Ives. An appeal by the Willis Brothers was thrown out. A compulsory winding up was ordered on petition of Mr R Ives, as damages of over £600 had not been paid. Edgar John Willis (son of Edgar Thomas) was noted as company director. However, Frederick and Edgar snr had moved to Cornwall by 1938/9. Were they just retiring from active involvement in the business? Edgar jun. appears to have emigrated to New Zealand with his father in 1951. Did they manage to take their business savings with them?

After 1950 there are no known members of this Willis family in Harpenden, but we hope readers of this page will be able to supply information.

The mill was subsequently occupied by Cole Plastics until 1976. 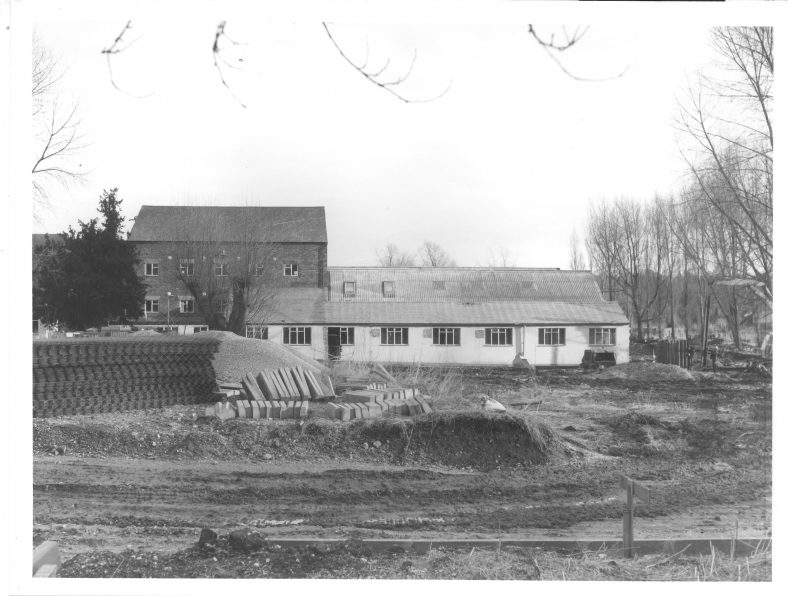